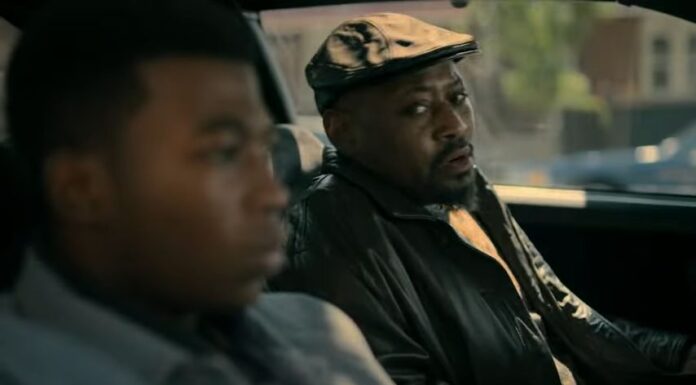 Raq encounters Detective Howard on Power Book III: Raising Kanan Season 2 Episode 2, and is shocked by what he says. Scrappy’s allegiance was under scrutiny. His recent detention put the family in danger, and Raquel might decide to settle with him permanently. Jukebox inquired about Raq her mother as setting out on an endeavor to reconnect with her estranged mother. Raquel was the one who actually fired the shot that killed Scrappy, one of her most devoted warriors, therefore the situation has now turned in her favour.  What happened in the next episode? www.tvacute.com brings you a promo of Raising Kanan episode 2.03 which you can watch below. So that you can prepare yourself for the upcoming new episode. And according to the official synopsis provided by Starz, the Raising Kanan new episode will be as follows.

In Power Book III: Rising Kanan Season 2 Episode 3, titled “Sleeping Dogs”, things are going to get chaotic and quick this time around. This is what takes place in a society where secrets are allowed to run amok, and on top of it, Unique has been released from jail. The tension between Lou and Crown has not subsided. In this episode, Raq makes an effort to expand into new territory, but when a colleague and other valuables go missing, she is compelled to work together with an old adversary for the first time in a long time.  After meeting Howard under completely unexpected circumstances, Kanan is in a state of shock. There is a possibility that Kanan and Raq, his mother, are losing trust in one another. How chaotic will things get before they are resolved?  we reach the end of this episode, not only will have had the opportunity to understand a little bit more about the histories of some of these characters.

Raising Kanan Finale Episode 2.03 Synopsis: A surprise encounter with Howard leaves Kanan speechless. Raquel tries to settle in new territory, but while investigating a missing business associate with her money, she comes face to face with an old adversary.

Raising Kanan Season 2 Episode 3 will be released on Sunday, August 28, 2022, from 9:00-10:05 p.m. ETon Starz. Power Book 3: Raising Kanan can be viewed on Starz.com as well as the Starz app.  Starz is also available to subscribers who have an active subscription to Philo (for an additional $9/month), or fuboTV (8.99/month). Starz can be added to your Hulu and Amazon account for $8.99 per month. Hulu (at 12:01 AM.)and Amazon offer a seven-day trial for free.

Raq suspects she may have an informant and gives Marvin the job of verifying the story. Crown and Lou disagree about the prospective new artist that Lou has brought in. Kanan aids Famous with the mixtape sales. Jukebox finds her mother, who is alienated from her. Raq and Howard cross paths, and when they do, Howard reaffirms his desire for Kanan to know that he is his father while also letting it be known that he recalls the night of the incident. Additionally, he informs her that Scrappy was at the station. After being evicted from his home, Famous and Kanan try to make some money by hawking mixtapes on the streets. Marvin attends anger management sessions often but does not engage. Raq’s mother is brought up by Jukebox, who subsequently requests that Burke locate her address. Nicole’s mother lashes out at Burker for how she handled Nicole’s passing. Marvin, Raq, and Lou Lou spoke about Scrappy’s allegiances. When Marvin visits Scrappy, he hears his claim that he was hanging photos the previous evening. Marvin investigates this claim and finds it to be untrue. Raq makes a search for a new house.

Cartier, Zisa’s manager, suggests a proposal for Zisa to collaborate with the studio. Lou-Lou agrees to the deal, but Crown is not on board. Howard keeps insisting to the cops that he doesn’t recall the shooting night. Kanan is advised by Raq not to take whatever Howard may say to heart. When Unique asks Dean for the job, he is informed that he is not a reliable investment. Raq convinces Worrell to join the company and then informs a recently freed Unique that he will no longer be working for him. Jess departs for Los Angeles to work. Louis and Marvin When Scrappy follows Lou to their ” new” lab, Raq kills him there. Should Raq have killed Scrappy? She didn’t even give Scrappy a chance to speak or explain. She was merciless and intolerant.