[Perry Mattfeld] In the Dark Season 4 Episode 13: The Final Ride 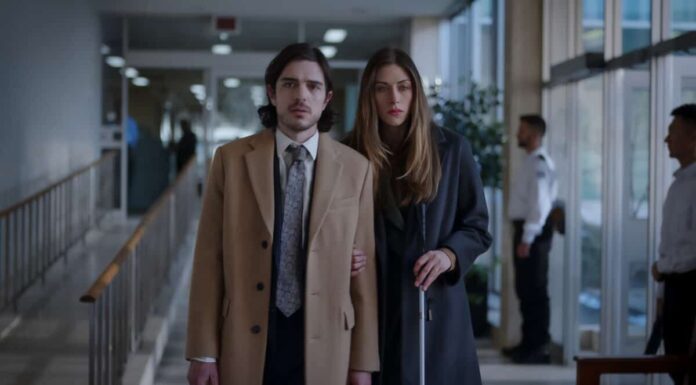 Murphy Mason (Perry Mattfeld) has changed over the course of the past three seasons from a slack receptionist to a drunken vigilante investigator, a drug front owner, and a woman on the run. But now she’s finally caught up to everything. In order to prevent herself from going to prison for her misdeeds in Season Four of In the Dark, blind anti-hero Murphy collaborates closely with her ex, Max (Casey Deidrick), her best friend Felix (Morgan Krantz), and his sister Lesley (Marianne Rendon). However, Josh Wallace (Theodore Bhat), a Chicago PD consultant and Murphy’s ex-fling, intensifies his fixation with Murphy, making it harder than anticipated for Murphy to avoid going to jail. Josh concentrates all of his efforts on getting her back behind bars while collaborating with detectives Gene (Matt Murray) and Sarah (Ana Ayora).  Following all of the highs and lows that have occurred during the course of the show, particularly during this season, the romantic relationship between Murphy and Max reached its absolutely heartbreaking conclusion in the penultimate episode, when Max sacrificed his life to save Murphy. (Read the recap below) Now Let’s move ahead. you can take a glimpse of In the Dark Season 4 Episode 13 synopsis, and promo with www.tvacute.com below, which will enable you to understand the episode better.

In the Dark Season 4 Episode 13 Spoilers

“Please Shine Down on Me” is the title of an upcoming episode. The episode was written by Corinne Kingsbury, and Ryan McFaul was the director. This will be going very significant as the It’s last episode of the series, we are hoping that whatever transpires here will bring the story to a satisfying conclusion.  The CW did inform the program’s writers that there was a possibility that the show may be canceled, just like they did with a number of other shows across the board and in a variety of genres.

It would appear that a happy ending for Murphy Mason’s story is not in the cards at any point in time. Whenever Murphy’s happiness is destined, that happiness doesn’t last long. She wanted to end the entire drug trade and marry Max. With whom she saw the future. Yes! Max Parish is dead. In this world, Murphy keeps losing the ones she loves the most. Now, she has lost Max.  it’s hard to even begin to imagine what the conclusion of the series will be like!

What will happen in the finale series?  Now! she only wants revenge, she finds a way to distract herself by giving herself a new inspiration. Felix is ​​with her as always. Will try to guide her toward alternative ways of dealing with her feelings, but this time it is an uphill battle. On the other hand, Josh felt great about himself because of what he did last night. But then he realized that it was not over yet. Check out the complete In the Dark season 4 episode 13 synopsis below for more information on what to expect right now:

In the Dark Episode 4.13 Synopsis: –SERIES FINALE – Murphy (Perry Mattfeld) copes by distracting herself with a new motivation: getting even. Felix (Morgan Krantz) attempts to help her find other ways to deal with her emotions, but like anything with Murphy, it’s an uphill battle. Josh (Theo Bhat) is smug as he slowly puts together how the night unfolded until he realized that it’s not over yet. Ryan McFaul directed the episode written by Corinne Kingsbury.

Is there a Promo of In the Dark Season 4 Episode 13?

Yes, you can watch it below!

In the Dark Season 4 Episode, 13 will release on September 5, 2022, at 9 p.m. EST on The CW. the series is still not going anywhere anytime soon.  You can also watch it on the CW app and Amazon Prime. In addition, CW is also available on devices like Amazon Fire TV, Roku, Vizio Smart TV, Chromecast, Android TV, Apple TV, and Xbox One. In the Dark season, 4 will be available on Netflix the following week.

We were aware that someone would be shot, and Max was a likely candidate. It’s odd that they haven’t had a major character death like this before when you realize how dark this series can be as well as the level of danger and trouble they’ve gotten into. It was a brave and contentious decision to take the love of Murphy’s life from her in such a sad way just before the last episode of the series. Even though writers had hinted at and anticipated this death the entire season, seeing it actually happen in front of our eyes was upsetting.

Felix and Max rush to help Murphy as Mckay begins to choke her. Felix disarms the doorman after a fight between them. Max enters and assaults McKay. Murphy is escorted to the elevator by Max. Before the doors close, Mckay emerges, takes the guard’s gun, and fires at Max. he is hurried to the hospital. Murphy is informed that Max is dead. His pulmonary artery was harmed by the gunshot. A punch came from Murphy’s tearful declaration that she was Max’s wife. Each word of Felix’s speech radiated shock and genuine concern.  It’s such a pivotal moment for the show and for Murphy’s persona that it heightens the melancholy of the finale. Max is dead now it seems Murphy will crumble. we have no idea how she manages, and there is a real risk that so much of her development could halt in the midst of her anguish and wrath. The only person she still has is Felix. Without him, I’m not sure how she would manage.

In the Dark Season 4 Episode 12 Recap

Max and Murphy discuss getting hitched. Murphy and Max receive assistance from Felix and Leslie as they prepare for the occasion. Sarah and Darnell reconcile. Prior to learning that Murphy accepted a settlement, Josh keeps phoning and is still fixated on getting Murphy a court date. He visits the police chief’s office and bugs it. Josh loses control once more after listening in on the data the chief is gathering. When someone checks the money to make sure the donation is accurate, Darnell and Murphy are present at the event. When the bankroller meets up with Darnell and Murphy, he only desires to do business with Murphy. He advances on her. Josh begins putting the pieces of the puzzle together and examining bank routing data to determine where the money for the drug trade came from so he may use it to find Murphy. He recognises James McKay as the person. Murphy was needed in the room since McKay, who is blind, couldn’t identify him. Additionally, he want to resume his conversation with Murphy. While the others try to enter the security room, Max exploits his position to con a janitor into opening the door for him. When they enter the room Murphy is in, they bring up the security footage. Sarah and Gene are keeping watch over Trey.

When Darnell isn’t there and Trey is arrested by the police, Trey becomes suspicious. Josh makes a phone call to McKay at the hotel where she is staying. He describes Murphy and her activities to McKay. Confronting Murphy is McKay. Felix and Max rush to help Murphy as Mckay begins to choke her. Felix disarms the doorman after a fight between them. Max enters and assaults McKay. Murphy is escorted to the elevator by Max. Before the doors close, Mckay emerges, takes the guard’s gun, and fires at Max, shocking everyone with his actions. Prior to realising that Max was shot in the torsion, Murphy is relieved that they are in the elevator. Max is in surgery when he is hurried to the hospital. Murphy is informed that Max is deceased. His pulmonary artery was harmed by the gunshot. Both Murphy and Felix are stunned, and Murphy requests to see Felix. Murphy visits Max in Felix’s company to say goodbye.