Get Ready for Tonight! New Amsterdam Season 4 Episode 3 “Same As It Ever Was” Preview 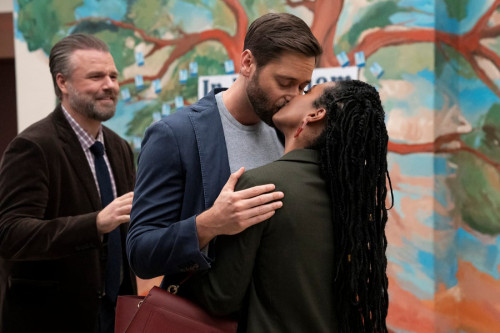 Helen mulls over her relationship with Max in New Amsterdam Season 4. Due to a staffing shortage, Max is tasked with managing an overcrowded ICU. It’s pointless to seek assistance from other departments because New Amsterdam doesn’t have nearly as many personnel as it formerly did. As we move into the next new episode, we know that a lot of the hospital is going to have reactions to Max and Sharpe being a couple. New Amsterdam season 4 episode 3 is coming on NBC tonight, and it’s going to be a big one for Max and Dr. Sharpe (Freema Agyeman). However, the couple doesn’t plan to stick to their jobs in New Amsterdam. Meanwhile, when patients continue to arrive, the ICU will be in shambles. As a result, the issue would necessitate everyone’s participation. Continue reading about episode 1 by scrolling down the page. www.tvacute.com has a photo and trailer for New Amsterdam Season 4 Episode 3 titled “Same As It Ever Was” which you can see below. So you can mentally prepare for the forthcoming new episode.

New Amsterdam Episode 403 Synopsis: Max and Sharpe go public with their relationship at the hospital. The team struggles to keep a handle on an overcrowded and understaffed ICU and everyone must pitch in. Iggy’s overly critical feedback alienates his residents.

New Amsterdam Season 4 Episode 3 will release on October 5 from 10:00-11:00 p.m. ET on NBC. New Amsterdam will be available on Hulu and NBCUniversal’s own streaming platform Peacock the day after it airs on television. Note that only earlier seasons are available on the free edition of Peacock. Traditional cable/satellite pay-TV subscribers can watch New Amsterdam because it is an NBC show. A TV antenna can also take up local NBC stations. Of course, if you use newer live TV streaming providers. NBC is still prominent on major platforms including Fubo TV, Hulu with Live TV, Sling TV, Direct Stream, and YouTube.

Helen and Max are walking to work together as the episode begins. She expresses concern and inquires if he has notified Luna’s grandparents. Max guarantees that he will inform everyone. For Dr. Wilder, Max holds a high-ranking position. He wants her to be New Amsterdam’s medical director. She says no. He begs her to consider it. Karen interrupts his meeting to let him know that the ICU is understaffed. Max makes the decision to take control of the situation. Floyd visits Lyn and apologizes, but he has no idea why. He acknowledges her feelings, but reminds her that she is married and sleeping with him.

Wilder explains to Max that she is unable to accept the position since she has a mentally ill brother who is her primary concern. Floyd apologizes to Lyn for the second time, but this time he knows why. Helen confronts Max, stating that she does not trust him as a partner. He isn’t getting ready to depart, and he isn’t even telling anyone. She has a feeling he isn’t serious about them. They arrive on the roof together, and the staff is delighted to see them as a pair. He announces that they would be leaving New Amsterdam and relocating to London. Everyone is taken aback. Karen dials a number and requests that a mysterious woman come to New Amsterdam to take charge. The woman responds that she will have to consider it.