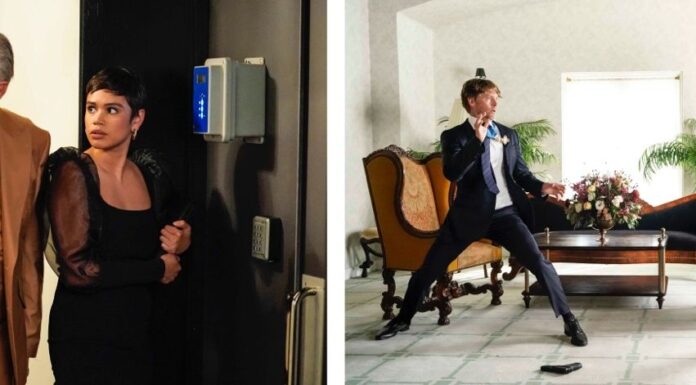 In the ninth episode of NCIS: Los Angeles Season 14, Arkady got into trouble again, although this time it wasn’t really his fault. It’s too bad because Vyto Ruginis’  nuanced performance as Arkady Kolchak is one of the show’s best parts every season. We may safely say that Miraslava Birisova  (Kathleen Garrett) is one of these people. He had a passionate affair with her, but he ended it by abandoning her in Malta. The look of recognition on his face at the sight of her on surveillance showed, however, that he had never forgotten her.   (tvacute.com) Here is all you need to know about the conclusion of the NCIS: Los Angeles Season 14 Episode 9 Recap, in case you missed any of the exciting moments.

When will NCIS: Hawaii Season 2 Episode 10 air? What to Expect??
Are You Ready for NCIS Season 20 Episode 10: What to Expect in ‘NCIS’verse Crossover
What will happen in the NCIS Crossover Event (2023)?

An auction of a rare jeweled egg that was taking place on a boat was abruptly stopped when the dealer’s men began shooting, resulting in the deaths of two security guards. Arkady (Vyto Ruginis), who is similarly assaulted at his home and flees into hiding, is the owner of the yacht, which bears his name. Kilbride, Special Agent Kensi Blye (Daniela Ruah), and NCIS Investigator Marty Deeks (Eric Christian Olsen) discuss whether or not Arkady is truly retired from the world of espionage. Retired Admiral Hollace Kilbride (Gerald McRaney) travels to the very last location where Arkady’s burner phone pings, which ends to be a bar. Arkady asserts that he is completely ignorant on the subject of boats.

On the yacht, Kensi discovers a camera that has been concealed inside of a smoke detector. The woman seen on the surveillance footage is identified by Arkady as being Miraslava Borisova. She was formerly Arkady’s sweetheart and now works as a dealer in illicit artifacts on the black market. Special Agent G. Callen (Chris O’Donnell) asks Arkady to schedule a meeting with Mira on his behalf. She immediately begins punching him. Callen finally saves him. Since the two of them broke up forty years ago, Mira has conducted all of her business transactions using Arkady’s name as if it were her own. Callen learns through Mira that the person selling the egg, Lexi Pasternak, was in a rush to make the sale.

Pasternak had passed away three days previously, and the circumstances surrounding his death were unclear. Fatima has learned that fifty percent of the billionaires who fled Russia following the invasion of Ukraine has met untimely ends as a result of their decision. Mira describes the oligarchs as “blood banks,” and she claims that the government hid its money with them. The OSP is conducting an investigation, but other organizations are not willing to assist them. In addition to this, Callen is transferred to the responsibility of the task force. Mira gives Arkady her consent to assist him in infiltrating the auction house. Deeks is posing as the customer, a member of the Swedish royal family. Mira neglects to reveal the fact that Arkady had to use a key in order to open her box. Additionally, she manages to get away from Coster. Inside Rupert’s (Jonathan Kells Phillips) safe deposit box, she comes across Arkady, who is armed. She had struck a deal with the Russians to hand over her client list in exchange for her participation in the murder of Arkady. However, she is unable to shoot him. The Russians have defeated thanks to the efforts of Kensi, Deeks, and Rountree. Mira hates to run.