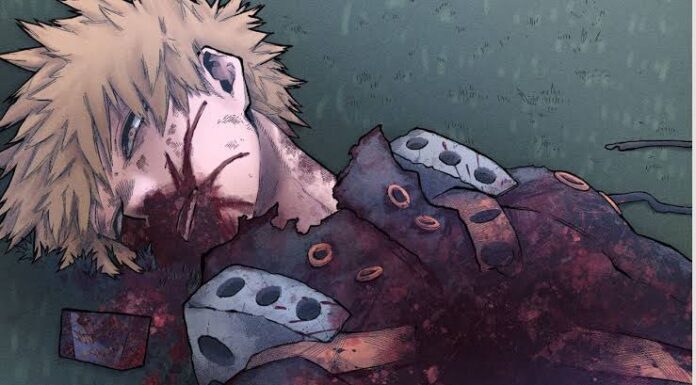 Is It Possible to Bring Bakugo Back to Life?

What to Expect in My Hero Academia Chapter 363

The ones who defend and the ones who attack is the subtitle of My Hero Academia chapter 363, according to the spoilers. In this chapter, four places are mentioned. Instead of proceeding chronologically, the article will cover the spoilers by the relevant locations.

#MHA363 #MHASPOILERS
now why is jeanist out here looking like a giraffe pic.twitter.com/dalCFI92B0

The beginning of My Hero Academia chapter 363 is revealed in spoilers to be a stunned and distraught Monoma recalling Bakugo’s yearning for a perfect triumph. Best Jeanist attests to Bakugo’s lack of a pulse. Mirio is upset because he was unable to keep the fort secure until Deku showed up. Shigaraki/AFO mocks Eraser Head by saying that the reason he hid was that he trusted his now-dead student.

The antagonist asserts that Mirko is Deku’s second present, but the Rabbit Hero is enraged rather than afraid, saying that Shigaraki should have been murdered back in Jaku. Shigaraki/AFO agrees that rather than delaying and giving the villains time to prepare, the heroes should have gone in accordance with Deku’s plan.

Skeptic has infiltrated and taken control of All Might’s command center from a laboratory in an undisclosed location, according to My Hero Academia chapter 363. He is currently operating a satellite and speaking with the bad guys through the Nomus’ neck-mounted speakers. He is also to blame for the breakdown of the heroes’ communication system.

Skeptic is controlling a satellite and keeping track of everyone's location. He's apparently communicating directly to many of the villains too. While many other companies were leaving Japan, he was dedicating himself to spreading Redestro's words #MHA363

Skeptic is observed messing with the civilian escape routes under U.A. through his computers for an unspecified reason. The chapter then shifts to the shelters where the Todorokis, in particular Fuyumi, keep an eye on the Remedial Course students. Shoto and Katsuki will deal with the bad guys, the kids declare to their teacher. Spies from the AFO from chapter 342 are also at the shelters.

Focus turns to Kamino in My Hero Academia chapter 363, where Dabi has imitated Shoto’s strategy of internalizing his fire in order to survive the last assault. Given that he is self-taught, Shoto claims that his sibling is a superior improviser. Burnin urges Shoto to flee as Dabi attacks them, but the young man resists.

It cuts back to Kamino and we see Dabi's still alive and kicking. He risked it all at the last second and tried copying Shouto's new technique. As a result, he has resisted it and is now burning Kidou and Onima, they're seriously injured. Burnin' tells Shouto to run #MHA363

When Touya asks Skeptic where Endeavor is, she responds that he is fighting the bad guy in the Gunga Mountains, and the chapter then turns to this area. In contrast to the previous conflict, according to AFO, this time the villains were well-prepared and caught the heroes off guard. The final page depicts AFO’s face, which appears to have partially recovered.

Even though an absence of a pulse can be considered proof of death, Horikoshi nevertheless gives himself some opportunity for convincing denial. In the world of superheroes, a pulse can be restarted by a number of peculiarities. But going ahead, readers must assume Bakugo is no longer alive. Although it is doubtful that Mirko will end up like Katsuki, it is still possible that she could become disfigured.

Chapter 363 of My Hero Academia disproves the “Dabi Phoenix” hypothesis. Shoto’s method hinges on combining Fire and Ice, and Dabi lacks the latter, therefore it’s unclear how he can mimic it. By naturally allowing his body to assimilate his blue flames, he probably adjusts his younger brother’s technique. Shoto’s earlier statements evidently didn’t get any attention because Dabi is still preoccupied with Endeavor.

Although unexpected, Skeptic’s appearance neatly concludes multiple threads. When combined with the presence of the AFO’s spies, his goal is to prevent civilians from escaping the shelters, which offers a double-edged menace. In addition to being a colossal failure for the heroes, most of them have families that reside in the shelters. The morale, mental health, and concentration of the heroes would suffer if they were put in jeopardy.

The enemies indeed appear to be better prepared than the heroes so far, as AFO rightly points out. Horikoshi, however, has the ability to completely reverse that advantage at any time by adding a logical Deus Ex Machina. More significantly, Shigaraki (at the U.A. grounds) and AFO (in the Gunga Mountains) both appear to have partially recovered.

Uncertain events may have taken place to lead to this outcome, but the heroes will undoubtedly suffer far more consequences. The raw scans that are included with the spoilers don’t give a complete picture of how they and Dabi are mending. For clarification, readers will have to wait for the official translation of My Hero Academia chapter 363.

My Hero Academia season 5 episode 23 release date and time in a different country.

Where to Watch My Hero Academia Chapter 363

My Hero Academia Chapter 363 watch on Crunchyroll and VRV.  On Wakanim, Scandinavians can watch Season 6 with Japanese audio and English subtitles. In the US, the season is available on Hulu. On AnimeLab, viewers in Australia and New Zealand may do the same. Episodes are also available on Viu, Bilibili, WeTV, iflix, and other Medialink affiliates in many South and Southeast Asian territories. In several Asian countries, such as Japan and India, new episodes are also available on Netflix. Subscribed viewers can watch ‘My Hero Academia’ current season on Funimation with Japanese audio and English subtitles on the same day.

As Tamaki prepared to use his final move, he thought back to everyone’s words of support. He thinks back on his past, rejecting every memory. He now expresses gratitude to them all for giving him increased strength. Tamaki focuses his Vast Hybrid Plasma Cannon at Tomura using Nejire Chan’s energies. Tomura fends off Tamaki’s assault with a barrage of fingers in an effort to defend himself. Lemillion then followed up with a blow to Tomura’s face. Tamaki was unaffected by Tomura’s tremendous and overwhelming attack, nevertheless. He started to make fun of the heroes instead, making them think Tamaki’s failed attack could have destroyed them all. They were labeled as being delusional for thinking Tamaki’s Plasma Cannon could kill him. After that, Tomura goes to Bakugo, who is determined to defeat him.

Bakugo is enthusiastic about winning despite Best Jeanist’s attempts to stop him as he addresses and considers Deku’s life choice. Tomura’s attacks were all successfully avoided by Bakugo as he started to charge toward him. He began to consider his Destruction Quirk, which would allow him to cause his nitroglycerin-like sweat to explode. He also learns about the cluster upgrade’s unforeseen implications. Bakugo is trying to conserve his perspiration for the launchable beads, which is putting a lot of pressure on his palm glands. Bakugo increased his speed by storing the beads in his glands until constant use caused them to flow out of his body. Bakugo becomes aware of how challenging Deku’s life is in the middle of all of this. Bakugo’s body throbs and gradually come apart as he wonders how he can one day approach Deku. Tomura, on the other side, is growing furious with Bakugo’s strength exhibition. He starts to question why he was getting angry at someone who doesn’t have One For All. So Tomura told Bakugo to end his life right then. The moment Bakugo realized he was in a white emptiness and saw All Might, he was reminded of the time he had forgotten to get his autograph. He asked him to autograph his All Might Trading card as he held it up for display.

Regardless of the attempts of the other heroes, Tomura punched Bakugo’s chest at that same moment. At this point, weather reports start to indicate a sharp drop in temperature over the Kanto, Chubu, and Kansai areas, and the public starts to think it’s raining. Tomura makes fun of him, claiming that all he was doing was reenacting their prior conflict, that “they” have prepared the ideal Demon Lord body for the Final Boss, and that this is the villains’ narrative. Best Jeanist yells at Dynamight’s heart as his lifeless body lies on the ground with a hole in his chest as Mitsuki Bakugo considers how their kid was never a fan of rain.