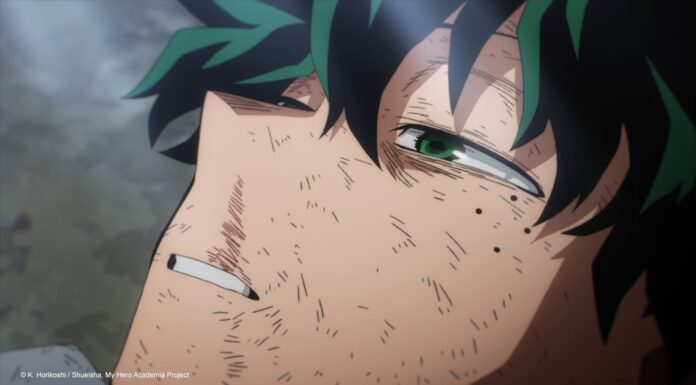 The sixth season of Bones’ My Hero Academia anime series, helmed by Kenji Nagasaki (chief director) and Masahiro Mukai, begins with the manga’s 26th volume’s final chapter. Ytv and NTV launched the season on October 1, 2022, with 25 episodes over two seasons. The season covers the Heroes’ final confrontation with Tomura Shigaraki’s Paranormal Liberation Front and U.A. High School’s Izuku Midoriya. After Hawks, undercover the merged-villain gang puts the parts together from his inquiry, the Heroes have all the knowledge they need to attack them, leading to an all-out fight that could transform superhuman civilization. The thirteenth episode of season six of My Hero Academia was valuable.

Prior to the League’s conflict with the Meta Liberation Army, when they confronted the Creature Rejection Clan, Spinner expressed his skepticism about Shigaraki’s strategy for their future. Using his Quirk on himself in the present, Mr. Compress mutilates his body and escapes Best Jeanist’s hands. He then compresses Spinner and Tomura Shigaraki and climbs up Gigantomachia’s back. In addition, while Endeavor is asleep, he compresses Skeptic and Dabi, who fled after fighting Shoto. Mr. Compress releases Spinner and Tomura Shigaraki by revealing that he is the great-grandson of the Peerless Thief Oji Harima and gives his life to let them escape. The identity of Mr. Compress as Atsuhiro Sako is then made known. Deku notices that his head is still pounding and that it is the quirk of the fourth One For All user, Danger Sense. Spinner places his last hand on Tomura Shigaraki’s face, forcing him to reawaken and release a radio wave blast that pushes the Heroes away.

And Season 6 of My Hero Academia continues to amaze 🔥 pic.twitter.com/mYqqTgoNrm

As Spinner is trying to awaken up Tomura, Mr. Compress is getting ready to reveal an unknown trick up his sleeves, but Mirio succeeds to strike down the enemy only at the right moment with his well-timed attack and eliminates him from the game. At this point, the extent of Mr. Compress’ injuries had become unacceptable, and it appears that he passed away at some point later on during the conflict. Spinner is reminded of Shigaraki’s statement that his hands give him disdain and serenity. Deku is given one final chance to stop him before being shot away and told that they would meet again once his body has been restored. Deku considers how, despite the horrific things Tomura Shigaraki had done, Tomura Shigaraki still appeared to be in need of assistance when he watched him being overcome and subdued by All For One.

On January 7, 2023, this highly awaited episode 14 of My Hero Academia Season 6 will finally air, and we can’t wait.