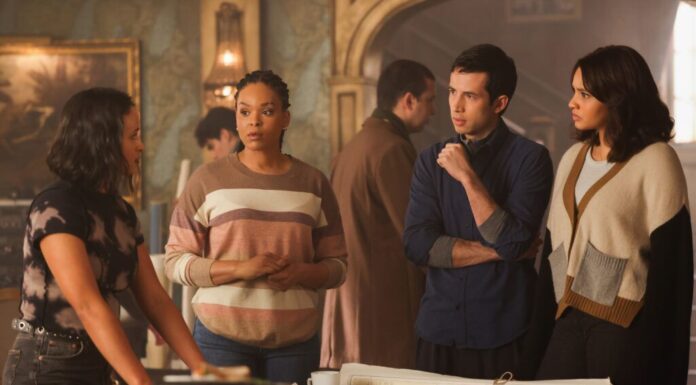 On Motherland: Fort Salem Season 3 Episode 6, when they were finally free to leave Horse’s mansion, Abigail and Adil, Scylla, and Tally left on separate missions. Surprisingly, no one suffered more damage as a result of their travels. Thelma organized the transportation for all three outings, demonstrating her prowess as a travel agent. The most important task was for Abigail and Adil to return a weak Alder to the mycelium buried beneath Fort Salem. They had to have taken the riskiest route possible as they crossed the Camarilla-infested eastern United States. What happened next, read the recap in the below section. Now fans are interested in learning more about Motherland: Fort Salem season 3 episode 8. What you’re going to see is really just the tip of the iceberg when it comes to the amazing content that remains to be covered in this last season. To discover what happens next, visit tvacute.com and view the trailer and plot summary.

Motherland: Fort Salem Season 3 Episode 7 titled “She Returns.”As the name of the episode suggests, we can only keep our fingers crossed that Raelle will make her comeback at some point during the next hour. The majority of fans have been anticipating this time and Raelle’s unavoidable return to the Unit after an agonizingly lengthy absence. In the meanwhile, Silver is mounting his first militarised attack against the Cession. A cherished council member’s betrayal costs the Cession its treaty, defense, and togetherness. Thelma has been prepared for a conflict with the external government, not for internal sabotage. Thelma and Cession will join forces with allies from all across to retaliate against the military. But we’re hoping to avoid that kind of violence. According to the video below, we’ll see the soldiers enter while their leader engages in combat with a Marshall. But Abigail will also exercise her leadership abilities to order the witches of Fort Salem to eventually recall who they genuinely serve. Willa and Raelle will also get a chance to engage with one another naturally without the mycelium getting in the way!

Take a look at the Motherland: Fort Salem season 3 episode 7 promo and synopsis that can be found below in order to obtain a few more specifics here on what it is that you can anticipate seeing.

Motherland Fort Salem Episode 307 Synopsis: Allies converge to protect the Cession from occupation. The Camarilla march on the Cession, ready to invade under the guise of smoking out our fugitives. Tally and Scylla team up while Abigail, Adil and Anacostia seek out President Wade.

Motherland Fort Salem Season 3 Episode 7 will release on August 2, 2022, at 10 PM. ET. on Freeform. you can watch it the next day on Hulu. The episodes will continue after one week.

Hearst interrupts Silver and Kara’s discussion with global leaders to inform them that Alder has returned and the witch bomb has been destroyed. Kara intends to attack The Cession by using Thelma’s disruption of Hearst’s onslaught as justification. The weakened Alder is being transported back to Fort Salem by Abigail and Adil. Edwin will be taken somewhere secure by Scylla. To focus on her mother May, Tally is returning to her California home. Anacostia is told by Petra that she must cooperate with Silver’s attack of The Cession. Tally’s house is being watched by agents. Abigail learns that the supervision officers have altered Fort Salem. Petra orders her soldiers to disregard Colonel Jarrett’s directives. When Penelope attempts to attack Abigail, Abigail learns that Penelope has come back. Raelle is speaking with Scylla and Edwin when Willa interrupts. The mycelium entangles alder. Tally joins May’s book group as they break into a government building and steal documents. Edwin learns from Scylla what Willa has been up to since her initial reported demise. Quinn uses distant speech to try and get Willa’s attention. Willa’s image is projected into Edwin’s house by the mycelium. Willa departs without making any commitments regarding Raelle. To find Wade, Anacostia is returning to The Cession with Abigail and Adil. Crates of witch collars that Tally and May burned were found in the basement according to Tally’s vision. Agents interrupt the book club meeting. Scylla bids Edwin and Quinn farewell. Tally expresses regret to May for the manner in which she left after getting drafted. Tally admits to being afraid about the future. May, however, advises her to keep battling. The planned attack of The Cession is discussed in a speech by Silver to the country. Building up a Cession militia has been Thelma’s goal. All of the Camarilla drilling sites were shut down by Willa and Alder. Alder returns to Fort Salem in the open, inspiring the witches.