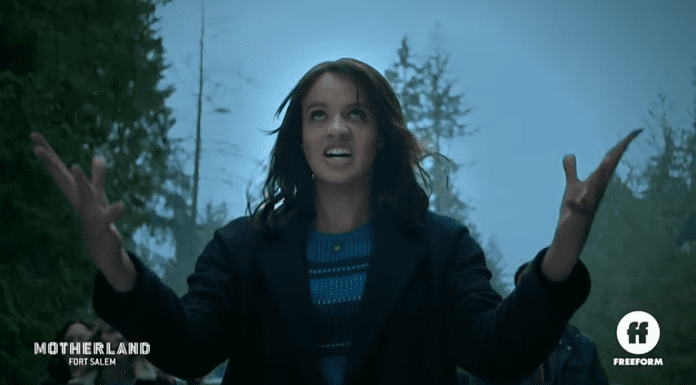 In Motherland Fort Salem Season 3 Episode 7, Raelle was the “she” referred to in the title, and she arrived at the party, a little bit later. She continued to look a little unsteady, despite the fact that Willa claimed that her daughter had recovered from her illness. Thelma Bearkiller forfeited any points she would have gained for setting up a covert militia at the council meeting by stepping right into a trap. What happened next, read the recap in the below section. Now fans are interested in learning more about Motherland: Fort Salem season 3 episode 8. What you’re going to see is really just the tip of the iceberg when it comes to the amazing content that remains to be covered in this last season. To discover what happens next, visit tvacute.com and view the trailer and plot summary.

Motherland: Fort Salem Season 3 Episode 9 [“But I Don’t Even Have a Dress…”] Raelle and Scylla are Engaged

Motherland: Fort Salem Season 3 Episode 8 titled “Petra’s Favorite Pen.” In the upcoming eighth episode of the third season of Motherland: Fort Salem the plot will undoubtedly take yet another predictable turn. As there are only three more episodes left before the conclusion.  there is at least one significant character who is in jeopardy. This is the kind of show in which you have to be ready for anything. According to the synopsis, The Unit is in a race against time to free a captured ally. The search continues for the First Song. In their quest to complete the First Song, Alder and Tally must now travel to retrieve the piece. Fort Salem finds itself under Camarilla’s control.  Especially the remaining two episodes are the ones that make us feel most uneasy about what’s going to happen in the future.

Take a look at the preview and the synopsis for Motherland: Fort Salem season 3 episode 8 that can be found below in order to acquire a few more specifics about what it is that you can anticipate viewing. Both of these can be located below.

Motherland Fort Salem Season 3 Episode 8 will release on August 9, 2022, at 10 PM. ET. on Freeform. you can watch it the next day on Hulu. The episodes will continue after one week.

Raelle is told by Willa that she is recovered. Raelle bids Willa farewell and ascends back to the upper atmosphere. Willa warns Raelle that The Mother will contact her at the conclusion but she doesn’t explain why. Thelma discusses her concerns with the other members of the council. Gathering Tally and Mac’s Dodgers is Scylla. Through a different marshal, Anacostia, Abigail, and Adil intend to get in touch with Horse. The two Camarilla agents on the council ambush Thelma. An invasion force is delaying the marshal at his frontier. The wards are removed. Thelma makes an effort to persuade Millie to change her ways. Tally’s scrying foresees danger for the council. Alder goes to see Santos, a Camarilla antiquities dealer in Madrid. The task force commander murders the marshall. Adil and Abigail decide to assault despite Anacostia’s commands.

Tally shares her end-of-the-world dream about Raelle with Scylla. A veiled Abigail then snaps the leader’s throat when Adil uses his strength to flip an Army truck. From atop the flipped truck, Abigail addresses the cadets with a motivational speech. The council is rescued by Tally and Scylla. Alder is informed by Santos that the stewards for the final two verses of the First Song are missing. Alder hangs Santos after he tries to stab her. To help the others flee, Scylla poses as Thelma and is apprehended. To murder a Camarilla special forces man and save Tally, Raelle emerges from the mycelium. Still frail, Raelle. At a diner, Nicte and Anacostia meet in disguise. Adil and Abigail sign up for Thelma’s militia. Abigail then recognises Raelle and rushes over to her. Alder hires Tally to perform time travel, warning her that the First Song is the only item that could possibly outperform the Witch Bomb. Raelle has returned, Scylla learns.