Gossip Girl Reboot Episode 12 Recap and how it ended? 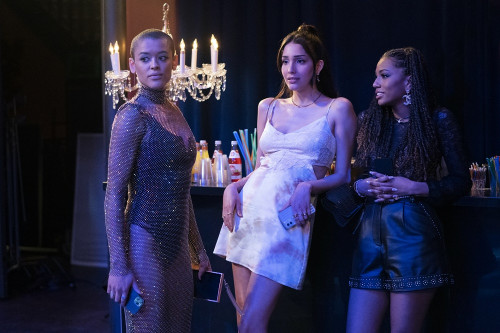 Through the viewpoint of students at the Constance Billard St. Jude’s School in New York City, the ‘Gossip Girl’ revival weaves a riveting and interrelated tale of luxury and accountability. As the inaugural season of Gossip Girl nears its conclusion, Julien, Zoya, and their pals continue to be torn apart by the show’s presence in their lives.

Julien strives to win over Obie in the finale while trying to figure out her life after receiving a reality check from everyone around her. The pals get together for a New Year’s Eve celebration, but they must make decisions that will alter the course of their lives. The season finale closes on a surprising tone, indicating that things are only going to get worse for the group in the future. Here’s a rundown of what happened in ‘Gossip Girl’ episode 12 and how it ended!

Recap of the first season of Gossip Girl

‘Gossip Gone, Girl’ is the title of the first season finale of ‘Gossip Girl.’ It begins after Kate, Jordan, and Wendy have posted every tip Gossip Girl has gotten, along with the name of the person who gave it to them. The activity on the Gossip Girls’ page has slowed since then, and Kate believes it’s a good thing the girls are dealing with their problems on their own. The Lotts’ financial situation means the family will have to make some lifestyle changes, so Zoya, Julien, and Nick look at their new residence in Queens.

Zoya wishes to spend New Year’s Eve with her friend Shan, but Julien persuades her to join her at Aki’s father’s house in Hudson for their annual party. Audrey and Aki find that Max is going through a difficult time as a result of his parent’s divorce, and they persuade him to accompany them to Hudson. Julien should get back together with Obie, according to Monet and Luna, so she can be in the spotlight once more. When Julien tries to make amends with Obie, she discovers that he is dating Grace, a politician’s daughter. Julien should bring Grace and Obie, Monet and Luna’s advice, so they can split them up.

The gang soon arrives at the opulent home. Max is entirely uninterested in being there, while Zoya believes she made the wrong decision by refusing to accompany Shan. Julien begins her plan to outshine Grace and mend fences with Obie, but she fails miserably. Grace is discovered to be a bad drunk, and Luna and her friends decide to get her drunk in order to expose her bad side. Julien’s scheme backfires in the end, making a negative impression on Zoya and Obie. Similarly, Aki and Audrey’s plot to persuade Max to join them falls through.

Is Gossip Girl Returning After Season 1 Ends? So, what are her new ground rules?

Julien discovers that Obie no longer wants to be with her in the closing act of the episode. She also gets a scolding from Zoya for her behaviour with Grace. Julien accepts responsibility for her actions and assists Obie in making amends with Grace. She also makes arrangements for Shan to pick up Zoya. Julien seemed to be finally maturing and making genuine amends. However, in the last moments of the episode, viewers are compelled to keep that thinking. Julien texts Gossip Girl about a possible collaboration and describes her new set of rules, which would wreak even more havoc on the Upper East Siders’ lives. When Kate sees the message, she agrees to the partnership right away. As a result, Julien and Kate appear to be taking over Gossip Girl in the near future. The information that Gossip Girl will reveal will not all be genuine, according to Julien’s new regulations, and the goal appears to be to turn individuals against each other by forcing them to question their trust. Finally, Gossip Girl posts a post announcing her return, signaling the start of the collaboration!

Furthermore, Julien and Kate’s collaboration is a union of power and privilege with a force of judgment and reason. As a result, Gossip Girl’s journey will not be without bumps. Kate also has a secret condition for their alliance, and it’ll be interesting to see how it affects Kate and Julien’s chemistry. Julien, of course, is unaware of Gossip Girl’s identity, which might have a cascading effect on the lives of everyone who is even somewhat connected to Gossip Girl. As things stand, Julien will be feeding Kate dirty secrets, which will be disastrous for everyone.

Is Max open to Audrey and Aki’s proposal?

After spending most of the season attempting to figure out what’s lacking in their relationship, Aki and Audrey realize it’s Max. In the closing scene, the couple tries to persuade Max to join them, but despite their best efforts, Max has reservations. Max is skeptical about relationships after seeing his parents’ divorce. As if he were some type of item, Max rejects Aki and Audrey’s first idea of sharing time with each other. Furthermore, because Aki and Audrey have been together for so long, Max will feel as if he is the disposable one if their three-way relationship does not work out.

The pair recognizes Max’s point and resolves to find a better solution. Finally, they make a new proposal to Max. Aki and Audrey propose that the three of them date each other equally and break up if things don’t work out. As a result, Audrey and Aki put their old relationship on hold in order to start a new one with Max. For a brief period, Aki and Audrey believe Max has also declined the second proposal. Max, on the other hand, unexpectedly accepts the proposal, kicking off a new relationship that is, to put it mildly, unusual.