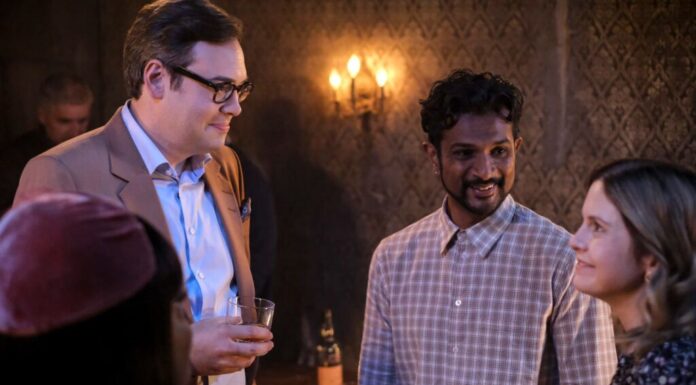 Ghosts Season 2 Episode 8 will air on December 8, 2022, on CBS. When Sam and Jay’s Woodstone whiskey tasting gets complicated,  Alberta is the most suitable ghost to assist Sam and Jay in their criminal activities.

On Ghosts Season 2 Episode 7, Hollywood is in Woodstone Manor. As we discover more about Pete and Flower’s deaths, it’s a double-dose investigation. we were aware of Pete’s demise’s specifics. A remarkable scene is when the trooper mistakenly shoots Pete in the neck with an arrow because it takes us by surprise. (Read the recap below)  Fans are now eager to discover more about the new episode of Ghosts (2021). At www.tvacute.com, you’ve come to the perfect place to get the Ghosts Season 2 Episode 8 synopsis and trailer.

In tonight’s episode titled “The Liquor License” Jazz era vibe, Alberta’s (Danielle Pinnock) first-hand experience of Prohibition may come in handy when Sam (Rose McIver) and Jay (Utkarsh Ambudkar) host a whiskey-tasting event without a legal liquor license, just as Hudson Valley Liquor Authority is about to come knocking on their door.  Trevor, meantime, founds a ghost fraternity in an effort to enliven the afterlife. However, when his actions bring back a challenging memory from Isaac’s fraternity days, T-Money is forced to face his friend’s concerns about fitting in. When Ghosts invites fraternities and alcohol to its eerie paradise, be prepared for some lively ragers, a trip to the vault, and a surprising appearance from a Superstore alum. If you’re interested in learning more, we’ve included the complete plot summary and promo for Ghosts season 2 episode 8 below.

Ghosts Season 2 Episode 8 Synopsis:  – Alberta’s expertise from her past comes in handy when Sam and Jay run into some complications during their Woodstone whiskey tasting soiree; Trevor devises a ghost fraternity, which inspires a revelation from Isaac’s past.

New Series Ghosts  Season 2 Episode 8 will air on December 8. “Ghosts” premieres on CBS on Thursday. Each episode will premiere on Paramount+ on Thursday nights at 9 p.m. ET/8 p.m. CT, (at 8 pm on NewsChannel5.) the same day it airs on CBS. The CBS All Access app has been renamed Paramount+, and you can now watch new episodes of “Ghosts” with Live TV the day after they premiere on Hulu.

In a flashback, Alberta, Thorfinn, and Sasappis can be seen witnessing Flower die as a result of the bear attack. After she is dead, Flower’s boyfriend departs. Flower is unaware that she is dead. Sam is participating in Isaac’s autobiographical interview. Nigel makes irate noises as he discusses the British and the reasons he joined the army. A producer for “Dumb Deaths,” Paula, has travelled to Woodstone Manor to record an episode about Flower’s demise. Because she doesn’t want to look foolish, Flower doesn’t want the TV show to go into production. Sam is persuaded to film the episode by Pete. The episode has Flower’s approval. Nigel is confronted by Isaac regarding the noises he made while talking to Sam. Isaac and Nigel debate who was correct in their disagreement. Thorfinn is reluctant to express his viewpoint. Paula says the network decided to change its mind and make the episode centre around a different murder.

The focus shifted to Pete’s demise. Pete’s actor makes an effort to understand what his persona is thinking. Pete overhears the director and the actor discussing what caused Pete to die. They took a different turn to make “Pete” miserable and inebriated. Trevor is consulted by Isaac for guidance on how to mend fences with Nigel. Trevor suggests that he shift the conversation’s focus to a more encouraging topic. Pete is upset that they want to portray him as inebriated. Sam tries to counter, but Paula dismisses her suggestion. To show Pete wasn’t intoxicated, the groups decide to get in touch with a former troop member. Nigel is persuaded to take a walk to a different area by Isaac. The two argue on where their nations rank in the world. To show that Pete wasn’t intoxicated, a trooper shows up. She recalls that Pete was muttering something about donut holes and that he distributed the bows and arrows prior to the safety speech. A flashback reveals that Pete and his wife had a disagreement over donut holes. Pete is upset and feels responsible for his senseless death on the part of the soldiers. Because of their disagreements, Isaac believes that his relationship with Nigel will end.

Sam consoles him and assures him that their nations are allies. Hetty has the brilliant idea to turn off the camera and the production by using Thorfinn’s strength. Jay is unsuccessful in his attempt to purchase a sandwich from the food truck. Thorfinn turns off the battery using his abilities. Another battery is prepared for the scene by the crew. A PA passes through Flower while high. Jay is struck by an arrow that he fires into the air. Former troop member Jennifer steps in to assist Jay with her talents. It demonstrated that Pete wasn’t a bad unit leader, which made him delighted. The group enjoys the most recent “Dumb Deaths” episode. It is revealed that the crew shifted their attention from Pete’s death to Flower’s death so as to avoid legal action. Sam took on the role of Flower as part of the agreement. The actor who played Pete fills in as Flower’s ex-boyfriend.