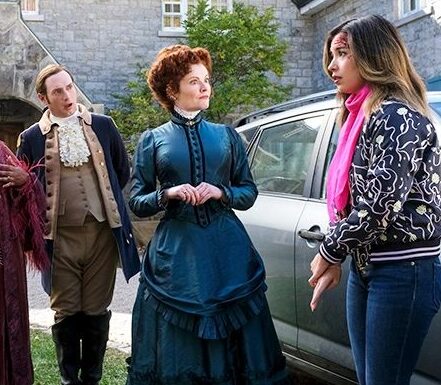 Ghosts Season 2 Episode 11 Recap: The Perfect Assistant,” Sam (Rose McIver) and Jay (Utkarsh Ambudkar) are so excited to hire eager new assistant Freddie (Mike Lane) when the supernatural hit comedy resumes after the holidays that Sam briefly ceases interacting with the ghosts she alone can see. They’re not having fun. However, Freddie has brought his own spiritual baggage (Superstore’s Nichole Sakura), to whom he is immediately drawn, so Sasappis (Román Zaragoza) is uncharacteristically tickled. In other phantom news, Thor (Devan Chandler Long) is horrified to find that his neighbor’s son Bjorn (Christian Jadah) is being bullied, but he doesn’t want Pete (Richie Moriarty) to step in and give him parenting advice. (tvacute.com) Here is all you need to know about the conclusion of Ghosts Season 2 Episode 11, in case you missed any of the exciting moments.

Sam and Jay conduct an interview with a potential new assistant employee candidate. Freddie is a recent college graduate who is interested in working in the hospitality industry and is inspired by Sam and Jay. Sam and Jay are blown away by Freddie. Sam extends an offer of employment to him, and he decides to take it. Thorfinn’s son Bjorn is currently stranded inside the home of the neighbour. Bjorn claims that he is being harassed by the ghost of the housewife. Sasappis, Flower, and Isaac make the startling discovery that Freddie’s automobile is inhabited by a spirit. Jessica is a car ghost; she was killed in a car accident, and she must always stay within five feet of the vehicle at all times. Following a meal of breakfast with her pals, Jessica passed away. Freddie is receiving instruction from Sam regarding the company. Both Alberta and Hetty are dissatisfied with the fact that Freddie will be present at the mansion for an extended period of time. Pete offers Thorfinn some guidance on how Bjorn should handle the situation with his tormentor.

Thorfinn encourages Bjorn to use his words in a way that will be harmful to the bully. The appearance of an automobile ghost has a devastating effect on the ghosts. Jessica reveals to Sam and the spirits that Freddie was the one who drove the car that killed her. Jessica reveals Freddies struck her with his car, sending her flying into the windscreen. Freddie then discarded her body before driving away from the scene. Jessica is the target of Sasappis’s advances. Jay is surprised to hear the truth about Freddie from Sam, but he is intrigued by the concept of a vehicle ghost. Sam wants to terminate Freddie’s employment, but Jay is on the fence about it because Freddie is such a valuable helper. Sam and Jay come to the conclusion that they need to terminate their employment with Freddie. Pete offers Bjorn the piece of advice that he should communicate with his tormentor about how he is being treated.

Thorfinn is irate because he believes that Pete is conspiring against him in order to steal his son away from him. Freddie was fired by Sam and Jay. Jessica admits that she possesses a ghost power that enables her to set off the automobile alarm. She was caught lying by the spirits, and as a result, she admitted that Freddie had never actually killed her. She had previously had the car and was driving intoxicated when she caused an accident, after which Freddie purchased the used vehicle. When Freddie is alone in his car, he begins to cry. Alberta, Hetty, and Isaac all feel bad about hurting Freddie, but Sasappis does not share their sentiments since he is so enamored with Jessica that he does not mind whether she is content. Date night will have to be rescheduled because Sam and Jay are up to their ears in issues at the B&B since Freddie has left. Sam learns from the ghosts that Jessica, not Freddie, was the person responsible for her mother’s passing. Sam is told by the ghosts that they have missed her and that they did not want to share her with anybody else. Both Sam and Jay are eager to have Freddie back. Thorfinn has a discussion with Pete regarding the advice that he gave to Bjorn.

Thorfinn comes to the realization that he needs to pay attention to Bjorn and assist him after Pete reveals that he had a father who was comparable to him. Sam and Jay place an order for a large number of burritos with the expectation that Freddie will show up. When Freddie comes, Sam and Jay express their regrets to him and invite him to visit again. Freddie nods his head in assent and resumes his previous position. Thorfinn extends his apologies to Bjorn for the counsel he provided. Bjorn shares with Thorfinn the news that his tormentor has apologized and that she now likes him. Thorfinn is attempting to have “the conversation” with him.