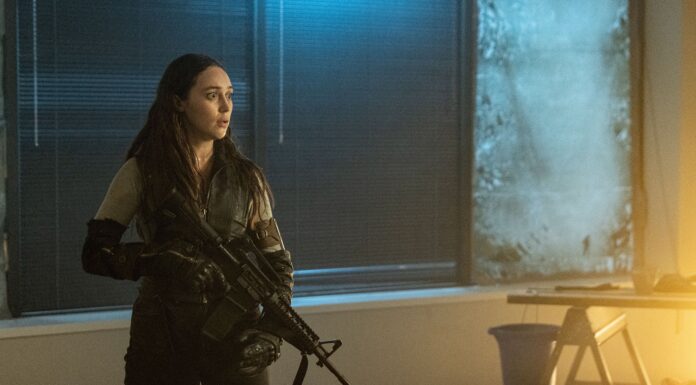 Strand invited Alicia and her companions in for a drink once they arrived at the Tower’s phone booth, for lack of a better phrase. Victor put Daniel in time-out while he presented his case to Alicia since he had also come in uninvited and was talking about meeting Ofelia. When his stalker-y raving failed to sway her, he ordered the beacon to be turned on. Her friends would all suffer horrific deaths, and she’d be locked in the Tower with him forever once the light had attracted his army.

Is Wes still alive? Is Colby Hollman still in Fear the Walking Dead?

Strand was quickly cornered by Alicia, who pushed him into the elevator, which she planned to take to the roof to switch off the beacon. Instead, the elevator was shut down as part of emergency protocol, giving Strand time to make a bargain with Alicia: he’d turn off the light in exchange for her calling off her army and agreeing to stay with him for as long as she had left.

Though a settlement was reached, Wes was not pleased when the two were released. “Have you gone insane?” he questioned Strand, omitting the obscenity I would have had to include. Wes would protect the Tower if Strand couldn’t. Strand and Alicia escaped his clutches no sooner than he declared himself king of the Tower. And Ofelia’s father killed his guard just as Wes gave the order to kill Daniel.

Strand and Alicia needed help getting past the rangers to the roof, so they raced to Daniel and told him his daughter was on the top floor. Even with Daniel’s assassin talents, Alicia fell before they could go that far. Daniel finally learned that Ofelia had died in the infirmary. He was about to kill Strand when it was pointed out to him that Charlie was still alive, if barely, and that he could be there for her.

Strand’s life was saved yet again. He and Alicia paused long enough for him to say that yes, she was the closest thing he had to a daughter as they made their way up, high on adrenaline. Will had convinced Strand that he adored her.

Strand completely reversed the wicked tune he’d been singing all season when Wes captured the couple again. He felt good about assisting people today after throwing how many people from the roof. Wes responded by revealing that he had discovered a transmitter among Alicia’s possessions. They’d never stand a chance if she called in troops, he continued.  Before Wes could kill Alicia, Daniel stepped in and saved her, only to be shot for his troubles. The confrontation between Alicia and Wes was then abruptly resolved when Strand stabbed his latest protege. Wes’ death was foreseeable when he did a complete 180 and defected to Strand’s side of the conflict when Luciana lied to Daniel about Ofelia’s existence.

Daniel dashed outside with June, Wendell, and Grace to tell Dwight, Sherry, and others to get into the Tower as soon as possible. Rangers started shooting from the roof before they could. Strand dispatched them quickly. He questioned Alicia, “Are you never going to forgive me?” “We don’t have time for this,” Alicia responded. Strand had an adolescent outburst while Alicia fell on an electric wire, which led to her skeletal hand puncturing a gas can. Finally, just as she had radioed out her message requesting assistance, she slumped as the roof caught fire.

Is it true that Strand spoke a big game but stopped short of killing Alicia?

Strand murdered so many people and lived a life of crime, so it was difficult to believe he’d suddenly change his ways in order to keep Alicia in the tower full-time. Because they’ve known each other since the pandemic began, there will always be a history between them. It’s understandable that they would quarrel, but Strand’s recent acts are those of a narcissistic monster who doesn’t deserve to be forgiven. In the elevator, there was genuine emotion between Alicia and Strand as they both sought to communicate with each other.