FBI: International Season 1 Episode 8 – Vo’s is injured in the blast 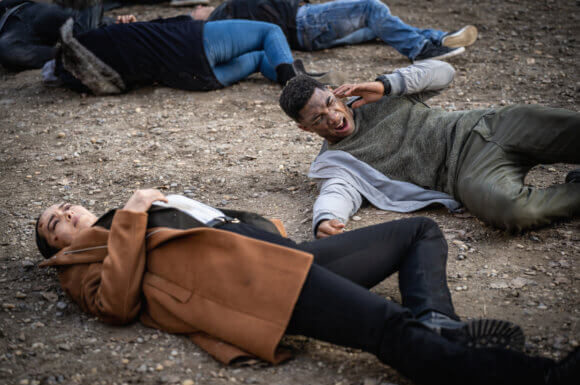 In the previous episode of FBI: International,  An American porn star was killed in Prague. Agent Forester and his crew were assigned to Dobbins’ case. Scroll down to get the full recap. After the last episode, the desire for new episodes is increasing. But still, the first question that arises is whether there will be a new episode tonight or not. Good news for FBI fans. Tonight, CBS is going to air a new episode of FBI: International. The summary and trailer for FBI International Season 1 Episode 8 can be found at www.tvacute.com. As a result, you’ll be able to mentally prepare yourself for the new episode.

On the eighth episode of season one of CBS’s FBI: International, the team is dispatched to Budapest after a bombing at a festival. “Voice of the People,” is the title eighth episode which is directed by John Polson from a storyline by Stuti Malhotra. This year’s installments are expected to include at least two more episodes, and It’s almost certain that these cases will be interspersed with some fascinating personal stories, just because that’s what we tend to see on FBI: International most of the time. we will at the very least gain a greater understanding of who Vo is and how her personal life is. Let’s hope for some pleasant surprises along the way!

FBI: International Episode 8 Synopsis:  When a group of Americans are among the victims of a bombing at a festival in Budapest, the team is brought in to find the perpetrators before they strike again; Vo’s new beau is injured in the blast.

FBI: International Season 1 Episode 8 will air on CBS on December 7, 2021, at (9:00-10:00 PM, ET/PT) The show will air on CBS and will be streamed live and on-demand on CBS app as well as on Paramount+. The first season is available on Amazon Prime Video.

Agent Forester and his crew were assigned to Dobbins’ case. They started looking for Eckersley’s newest employees. The guys allegedly knew the two individuals were wanted by Americans but refused to help them because they believed the American legal system had messed them. They stated the women duped were intelligent adults. They were unhelpful and unafraid of the man who murdered Eckersley. But Forrester and his crew did find a suspect. They found him. Clancy was the young woman’s father and a cop in Oklahoma. He was trained. He can shoot a rifle and buy a plane ticket five hours before boarding. Clancy was the killer. The FBI later obtained a tip that he was still in the country seeking for Dobbs. They located Eckersley’s coworkers just before he died, and one of them knew where Dobbins was. But she refused to talk unless she was compensated. The FBI discovered Dobbins and obtained what they needed. They took him. His father wasn’t as awful as his sister, he conceded. Ella Clancy, Kayla’s sister, was as devastated by her sister’s death as her father was. Ella also backpacked around Europe and has gun experience. It was a practice that made perfect, Ella said on Instagram. The FBI concluded Ella killed Eckersley and told her father. That’s why he rushed to Prague. He’s hunting for a daughter and attempting to keep his lone child alive. But he can’t shield her from the fallout.

Jamie felt Forrester’s pain. He told them where his daughter was hiding, and Jamie went to get her first. They hid behind trash cans. She wanted to hide the killer. Jamie also talked Jim Clancy into confessing to the crime. Jamie was a pro. She did it consciously to protect Ella, and she told Jim Clancy so. Clancy claims they battled for the gun. He’ll be charged with murder. He faces two years in prison and all he wanted was to see his daughter before he was arrested. Clancy reassured his daughter. Ella hugged him, and they parted. But Forrester knew. No proof, but he knew. He advised Jamie to make sure her priorities matched the job, and she did just that. She told him she was taking leave. Jamie met Ella afterward. Ella was taking the retrieved bag to Norway to scatter her sister’s ashes. Kayla just did what she did to save money to visit Norway, and her sister wants to honor that by bringing Kayla there to be buried.