Get ready for Tonight! FBI: International Season 1 Episode 9 – One Kind of Madman 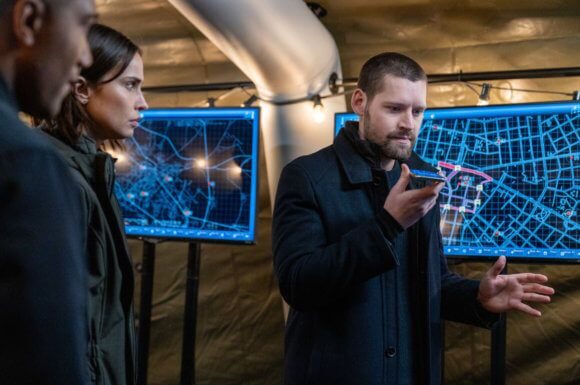 In the fall finale episode of FBI: International, At a music festival, there were two explosions. Special Agent Carmen Vo was there with her boyfriend, but she had to leave due to professional obligations. Raines, her partner, was picking her up from the construction site when the first explosion occurred. Read the fall finale recap below.  Tonight, CBS is going to air a new episode of FBI: International. The summary and trailer for FBI International Season 1 Episode 9 can be found at www.tvacute.com. As a result, you’ll be able to mentally prepare yourself for the new episode.

FBI: International Episode 9 Synopsis: The team jets to Bulgaria when terrorists hold hostage for millions in cryptocurrency a concert hall filled with multinational student performers and their families. Also, Raines is intent on proving his field skills, and Forrester receives news of their dog, Tank

FBI: International Season 1 Episode 9 will air on CBS on January 4, 2021, at (9:00-10:00 PM, ET/PT) The show will air on CBS and will be streamed live and on-demand on CBS app as well as on Paramount+. The first season is available on Amazon Prime Video.

At a music festival, there were two explosions. Special Agent Carmen Vo was there with her boyfriend, but she had to leave due to professional obligations. Raines, her partner, was picking her up from the construction site when the first explosion occurred.  When they started going to the explosion site, they had no idea what it was, and that’s when the second one went off. The second one was significantly larger. It threw the agents off balance. Vo’s first concern was her boyfriend when they reconnected later. Vo went in search of her boyfriend. He was pursuing a career as a musician’s technician. Vo knew he was near the explosion location because he was thrilled about the event. Later, she discovered him with shrapnel in his leg. As she sought to get him an ambulance, she used a scarf to tie off the cut.

The music event was a huge success. There were perhaps five Americans in attendance who died. The terrorist incident also occurred in Budapest, which is home to the FBI’s International Unit. The FBI was enlisted to assist with the inquiry. Forrester told his crew that they could take a break if they wanted, but they all wanted to work. Vo, too. She was determined to discover who was responsible. They started their investigation with Bartalan Agostan. Agostan was the embodiment of the American ideal. He was the son of Hungarian immigrants who immigrated to the United States in search of a better life, and he went on to become a millionaire. He was also a supporter of Hungary. His employer was one of the festival’s sponsors, and he was one of the festival’s victims.

Agostan was a prosperous man. It’s possible that he’s made enemies. Trumantis, his company, just backed out of a deal with a woman who was going to attend the event and had also placed a large order for ammonium nitrate. The suspect was interrogated by Forrester and Jamie. She denied having any involvement in the blasts. She also stated that she was present. Due to a work engagement, she had to leave early. They inquired about the ammonium nitrate, to which she replied that her firm grew vegetables. It does, in fact. She went on to say that the business from which she ordered the ammonium nitrate had taken advantage of her. There were enough chemicals missing to make two additional explosives. As a result, the chemicals have been stolen by someone from the ammonium nitrate firm.

Buda Petro Chemical was investigated by the team. Elek Simko, who was in charge of the shipments, was the only person in command. He worked as a delivery worker. Simko’s home was raided after the ammonium nitrate vanished along his route. They discovered it to be empty. Drugs were discovered. But there’s ample evidence that he’s their terrorist. The man himself was the only thing missing from the apartment, and he became a wanted man. Because of Trumantis, Simko lost his job. He looked for work but was unable to locate it. His wife had abandoned him. She seized the children and was granted sole custody. Simko had lost everything as a result of Agostan, which is why he killed him. However, this didn’t explain why he took enough chemicals to make further explosives, so the FBI spoke with his ex-wife.

At first, she was hesitant to speak. He was still a fine man in her eyes. She only left him because he lost his way after losing his job, and nothing she did could assist him. She didn’t mind if he went to work. She obtained a job and everything were going well until she observed the changes in his personality. He began attending rallies. He started frightening his wife. She left with the kids because she didn’t like where he was headed, but by doing so, she had cut him off from the rest of the world and left him alone and angry. The rallies held by Simko were in support of Hungarian patriotism. They wished to eliminate the imperialism that had seeped into the country with the fall of the Berlin Wall and the end of communism. Simko’s second bombing target was Buda Petro Chemical, which was endorsing automation.

A few people perished once more. Because the ostensibly patriotic group in which he was a member was publicising the attack as a protest against imperialism, Forrester and his team communicated with the movement’s leader. They were aware that he was in touch with Simko. They couldn’t verify it, but Forrester remembered something he said about the Americans being the aggressors in the first place. He figured out where the next bombing would take place. Buda Petro Chemical would be the location. Simko’s ammonium nitrate supply would be blown up, wiping out blocks for kilometers, so Forrester and his team jammed the area’s cell tower. Simko was unable to detonate the next bomb as a result of this. He then attempted to flee but was apprehended. And while he was being arrested, Simko made no apologies at all. Vo hoped that his message of getting the Americans out would get traction now, but Forrester said he knew a man who was present during the Oklahoma City terrorist attack and who claimed that no one recalled the terrorist. Only the downtrodden. Simko was caught for supporting a terrorist attack, and the individual who inspired him was also jailed.