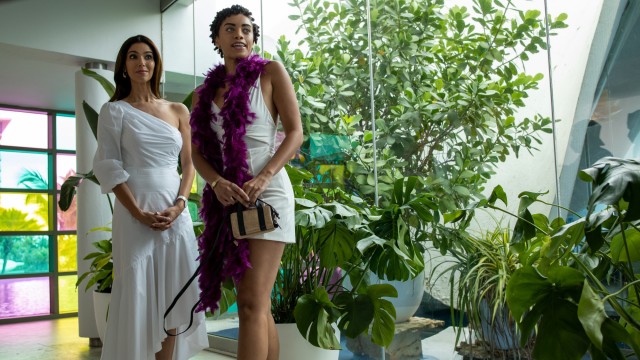 Fantasy Island centers on Roselyn Sánchez‘s Elena Roarke. In the 1970s classic, she plays the grandniece of Mr. Roarke (Ricardo Montalban), the enigmatic proprietor of a surreal island resort where visitors’ wildest dreams might be realized. Season 2 of the 2021 series, in which Elena is still active, has recently premiered. She aids the disadvantaged, affects positive change in people’s lives, and gradually allows the island to mend her own wounds. The second season of Fantasy Island promises that Elena “will open herself up for the prospect of love.” Previous episodes had dropped hints about Elena’s history and the fiance she still pined for. Meanwhile, the chemistry between Javier (John Gabriel Rodriguez) and the people he brought to the island never died down. The foundation of the 1970s show has been preserved in the reboot, with new guest stars bringing their own unique stories to the show on a weekly basis. Each episode’s goal is to help the protagonist reach an inner calm. Nevertheless, this is not always the case.  (tvacute.com) Here is all the information we have on Fantasy Island Season 2 Episode 4.

The new episode is titled “Mystery in Miami,” A first glance at the episode’s title might lead you to assume that you know exactly what to expect. In the 1980s, three closest friends who had been friends for more than fifty years decided to search for the fourth member of their group who had gone missing. In the meantime, Roarke discusses letting people in with Segundo, and Ruby’s cabin fever has become an itch that needs to be scratched.

Brett Butler is an American actress, writer, and stand-up comic. She was born on January 30, 1958. She is best known for playing the title role in the 1993–1998 ABC comedy series Grace Under Fire, for which she was nominated for two Golden Globe Awards. In 2008, Butler was the main act at a fundraiser for the arts. She was very open with a reporter about her depression, drug use in the past, work on TV, and life on the farm now. She also said she would like to write another book. She played Tammy Rose Sutton on The Walking Dead, a scary show on AMC. Also in 2019, she got a recurring part as Reese Witherspoon’s character’s mother, Sandy Jackson, on the drama series The Morning Show on Apple TV+.

Daphne Etta Maxwell Reid is an American actress, comedian, designer, and former model. She was born on July 13, 1948. From 1993 to 1996, she played the second Vivian Banks on The Fresh Prince of Bel-Air, an NBC sitcom. She was the first black person to be on the cover of Glamour magazine. She has been on a lot of different TV shows. During the sorority’s 50th national convention in New Orleans on July 31, 2010, she was made an honorary member.

Lynn Whitfield is an American actress. She was born on February 15, 1953. She started acting on TV and in the theatre before moving on to supporting roles in movies. Her breakthrough role as Josephine Baker in the HBO biopic The Josephine Baker Story earned her a Primetime Emmy Award for Outstanding Lead Actress in a Limited Series or Movie and a Golden Globe Award nomination (1991). Whitfield has won seven NAACP Image Awards all together. Whitfield has had two marriages. Vantile Whitfield was her first husband. He was with her from 1974 to 1978. She was married to director Brian Gibson from 1990 to 1992, and they had a daughter, Grace.

Maureen Denise McCormick is an actress from the United States. She was born on August 5, 1956. She played Marcia Brady on the ABC sitcom The Brady Bunch, which ran from 1969 to 1974. She also played Marcia Brady in several spin-offs and movies based on the show, such as The Brady Kids, The Brady Bunch Hour, The Brady Brides, and A Very Brady Christmas. She also had a short career as a recording artist, putting out four studio albums and touring with the Brady Bunch cast. Here’s the Story: Surviving Marcia Brady and Finding My True Voice, McCormick’s autobiography, debuted at number four on The New York Times’ list of best-selling books. On August 30, 2016, it was announced that McCormick would be one of the celebrities on season 23 of Dancing with the Stars. She danced with Artem Chigvintsev, who was a professional dancer.

New Fantasy Island Episode 204 Synopsis: Three best friends of fifty-plus years set out to track down the missing fourth member of their squad… in 1980s Miami! Meanwhile, Roarke confides in Segundo about letting people in, and Ruby’s cabin fever is an itch that needs to be scratched.

Fantasy Island Season 2 Episode 4 will release on Monday, January 23rd at 8 pm ET/PT on FOX.  You can also watch the episode on Fox’s official website shortly after it premieres on television. Roselyn Sanchez’s Fantasy Island will be available for streaming, and there will be several options. You can watch the new season in real-time if you don’t have access to Fox via streaming services like YouTube TV, Fubo TV, and Hulu+ Live TV. Before committing to a monthly membership, you can test out each platform using a free seven-day trial.

The following day, fresh episodes of Fantasy Island will be available to stream on Hulu if you don’t want to (or don’t have time to) watch it live. Before committing to plans that start at $6.99 a month, you can test out the streamer for free for 30 days if you haven’t already done so. You may access the show’s official page on Hulu’s website or the Hulu app after creating an account and watching it whenever it’s convenient for you.