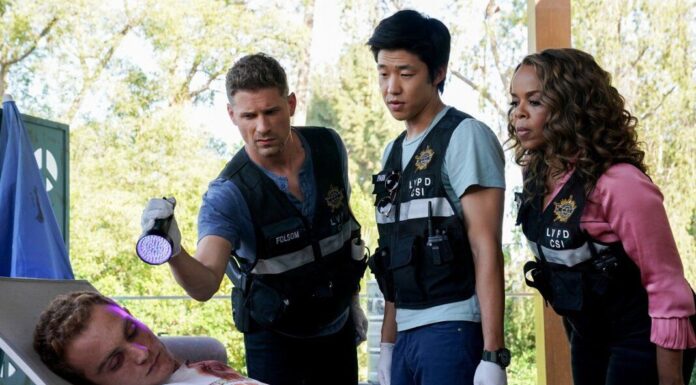 It is heartening to observe that storylines that were introduced early on in this season of CSI: Vegas are being picked up again, rather than being left hanging without being addressed. The fact that there is a major villain who hasn’t been exposed was driven home in the ninth episode of the second season of CSI: Vegas. In the eighth episode of Season 2 of CSI: Vegas, Catherine provided the solution to the murder of Grace, which appeared to bring an end to the primary ongoing plot line. However, it has now come to light that the remaining episodes of this season will follow a new narrative thread.

The ninth episode of the second season of CSI: Vegas, features a Shocking Link. Even though it didn’t appear to be the case at first, it turns out that three of the nine cases that are being investigated in CSI: Vegas Season 2 are connected. This case, which involved two killings at a Regency romance festival, appeared to be simply another one of the strange deaths that the CSI lab in Vegas kept getting dropped in their laps.   ‘CSI: Vegas’ Season 2? At www.tvacute.com, you can find a summary, and trailer for CSI: Vegas Season 2 Episode 10  which will help you better understand the episode.

we are aware that each and every case that is presented on this show has the potential to be memorable. So what lies ahead, CSI: Vegas Season 2 Episode 10 titled “Eyeballs.”  In this episode, A well-known guest at a party for people who have a lot of influence on social media is brutally killed. Chris Park’s side gig is the source of his exceptional qualifications to head up the investigation being conducted by the CSI team. Sara Amini, Madison Lewis, Riley Lewis, Ruben Vernier, Zach Tinker, and Connor Price are among the guest stars for episode 10. Ryan Lee wrote the script, and Allison Liddi-Brown directed it.

CSI: Vegas Season 2 Episode 10 Synopsis:  A social media influencer party ends with the brutal murder of a popular guest. Chris Park’s side hustle makes him uniquely qualified to lead the CSI team in their investigation.

CSI: Vegas Season 2 Episode 10 will release on Thursday, January 5, 2023, at 10/9c on the CBS Television Network, and is available to stream live and on-demand on Paramount+. Also Available on Youtube Tv | VUDU | Amazon Prime Video

A young woman flees in terror, and stumbles as her chaser draws near. Shelby Winslow, a woman attending a Regency romantic festival, was murdered, and Folsom, Allie, and Penny are looking into it. An attendee named Clarence Mosley is discovered dead with an injury similar to his. At gunpoint, Serena discovers a photo strip of the two victims. Grackle scat is the material found all around the gunshot wound. No victim had a bullet in their head, according to Sonya. Maxine suggests that a captive-bolt pistol was used in the murder. Lamont Moore, who Alan Herskovitz had been stalking, becomes the killer’s next target. Moore’s bed has a box of cash, which Allie discovers. Moore was a hotel worker at the venue for the festival. Because of Mosley’s likeness to Moore, Max suggests that he might have been mistaken for Moore and slain in an identity error. Penny is encouraged by Catherine to express her opinions. Documents are discovered by Folsom and Allie in Moore’s hotel tub. The materials demonstrate Moore’s blackmailing and the connections between three recent instances the lab worked on. Herskovitz is the only one still alive out of the current suspects who were all clients of the same psychiatrist. He has no recollection of Max or Catherine. He has a poor response to Moore’s note “Safeguard your secrets. Remove the bad fruit.” Guards pull him away after he begins to rage. Testing reveals the location of the corn in the crackling feces. Allie and Serena visit Richard Ambrose Sloan’s farm. Serena is attacked, taken down, and held at gunpoint by him. Serena kills him with his pistol as they fight. Sloan believed he was carrying out the commands of an AI named Basilisk. Penny is urged by Catherine to express her viewpoint. Folsom is informed by Allie that they cannot remain, friends, as they were prior to Serena.