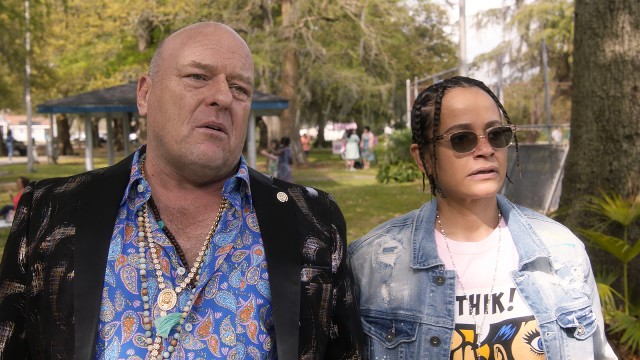 The previous episodes of Claws delve deeper into Desna, who has been making dubious decisions in her drive to become a dr*g lord, which has strained her relationship with her longtime bestie Jenn. Claws Season 4 Episode 3 and Episode 4 continued Dark Desna’s decline. This new boss lady has managed to alienate everyone in her immediate vicinity. Desna’s enduring appeal is that, no matter how heinous an act she committed, she was a mother figure who would look after her extended family. continue reading episode 3 + 4 recap. Fans are now eager to discover more about the latest episode of Claws. At www.tvacute.com, you’ve come to the perfect place to get the claws Season 4 Episode 5 titled “Chapter Five: Comeuppance” synopsis and trailer as well as more information about what’s to come.

Claws season 4 episode 5 is on the way. Are you ready for it? that will make you cry. The title of this episode is “Chapter Five: Comeuppance.” Desna feels bad for Jenn and Bryce, so she lets them stay in her condo. Jenn takes Oxy to relax. Uncle Daddy is given custody of the kids but then loses them. The girls are placed in foster homes. we’re most worried about Jenn. Jenn is also going to be so close to Desna’s empire that it’s going to make things more dangerous.

Claws Season 405 Synopsis: Feeling guilty for Jenn and Bryce losing custody of their children, Desna offers them use of her condo, where Jenn begins secretly taking Oxy to steady her nerves. After Uncle Daddy is awarded custody of the kids and then promptly misplaces them, the girls are forced to enter a foster home.

Desna and her friends go to a sex-toy party hosted by Lusty Souls. Desna intends to use the company’s multi-level marketing strategy in her own sales business. With her latest mark, Baron von Rykle, Ken interrupts Polly’s lunch. The baron whacks Dr. Ken with his cane, and then Selena, a lovely woman, helps him up. Bryce has a buyer lined up for all of the fentanyl patches, but Quiet Ann is concerned. Ouibank requires Desna and Jenn to co-sign a loan. Desna gives her pitch to a small group of potential Claws Up reps. Tony, Desna’s younger delivery driver beau, is interested in getting to know her. She hires him to deliver her packages. Dean has become Ann’s birthing class partner and is causing quite a stir. Ken is kidnapped by Uncle Daddy. Dean expresses his regret to Eve, the class’s teacher, and invites her out. The baron is terminally ill, as Polly discovers. At a Claws Up party, a customer overdoses, but Desna revives him. Cordelia, the baron’s daughter, threatens Polly. Georgia, Virginia’s trainee, is causing her problems. After one of Jenn’s salesmen, Kim loses her proceeds to her violent husband Jake, Jenn and Desna fight. The commune to whom Bryce sold the fentanyl is actually a doomsday cult on the verge of committing suicide. Desna, Jenn, and Kim go through Kim’s belongings to sell in order to recoup the money Jake took. Clay, Ann, and Bryce steal the patches from the cultists’ bodies in order to conceal their involvement. Virginia and Georgia lament over their difficult circumstances. After hitting Jake with a golf club, Kim is imprisoned. Kim reconciles with Jake and resigns. Ann enlists the help of her old prison softball team to serve as Uncle Daddy’s d#ug dealer. Ken gives Clay and Desna an ultimatum: either he works for both of them or he snitches. Desna informs Jenn that she won’t be able to flourish being a softie.

Dean tells Desna that his life’s ambition is to work as a midwife. That was after he revealed that he is Quiet Ann’s partner in childbirth. Bambi Claws Up is named consultant of the month by Desna. Ann, who is reserved, turns down Cherry’s approaches. Dr. Ken invites Selena to play mini-golf with him. Desna brings her coworkers out to celebrate the success of Claws Up. Someone is rebranding and selling her bottles, she discovers. Clay lands a punch on Rolf, a combatant. Uncle Daddy tosses Bryce into the ring with Rolf after his opponent fails to show up. Polly and Virginia go for their evening with the baron as Desna and Jenn look for Fred, the bartender selling the renamed pill bottles. Following Fred’s interrogation, he divulges the name of his supply, Ann. Joyce, the baron’s terminal friend, has it on her bucket list to learn the hustle. Desna and Jenn are informed by Dean that Ann is at Clay’s warehouse. Desna interrupts Ann and Cherry’s conversation. Ann claims she did not steal the d^ugs. Georgia dials the salon’s number to report a break-in. While doing the hustle, Joyce passes out. Ken kisses Selena after a hole-in-one while ignoring a call from Polly. Joyce asks Polly for enough oxy to put a stop to her pain. According to the burglar, he was paid to steal the oxy and deliver it to Lou’s Auto Shop. The thievery is being perpetrated by Bambi. Bryce defeats Rolf after a pep talk from Jenn. Polly, posing as Joyce’s estranged daughter, assists her in crossing the border. Desna throws a fist at Bambi. When Selena informs him she’s transsexual, Ken doesn’t flinch. When Desna and Bambi are fighting, Desna accidentally kills Bambi. Polly shares her Joyce experience with the others. Ann takes a step back from Cherry. After the cops picked up Jenn and Bryce’s girls walking the streets, social services is speaking with them.