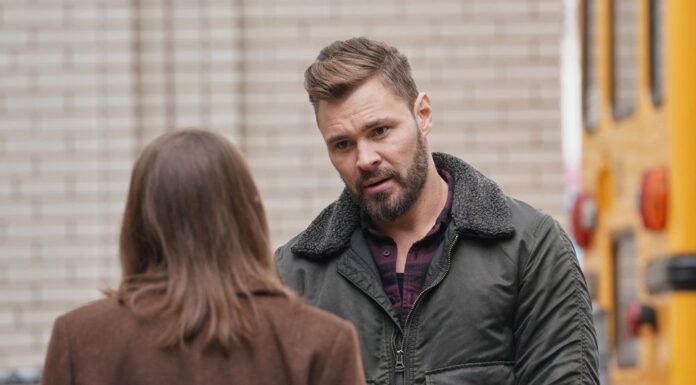 NBC’s One Chicago dramas have been taking a break for a long time, but they’re back. we are eager to learn more about Kim Burgess and Adam Ruzek’s friendship in Chicago PD. They had a romantic relationship in the past, and they now appear to be co-parenting Burgess’s daughter, Makayla. What does the writer have planned for tonight? On www.tvacute.com, you can find the summary and promo for Chicago PD Season 9 Episode 10 titled “Home Safe” which will help you understand the episode better.

Adam Ruzek and Kim Burgess have had an on-again, off-again romance for a long time. Their friendship dates back to the first season. While fans had hoped that they will reunite in 2022, it appears that this will not be the case. The next episode of Chicago P.D., according to a new ad for Season 9 Episode 10 titled, will center on Kim Burgess and Adam Ruzek’s relationship. Kim seemed to be nudging Ruzek to meet other ladies and move on. Someone from Makayla’s past makes an unexpected comeback, as per the synopsis, leaving Ruzek and Burgess in a state of shock as they try to figure out what it means for Makayla’s future.

Chicago PD Episode 9.10 Synopsis: The team searches for a missing child in what turns out to be a very complicated case; Burgess and Ruzek are in for a shock when someone from Makayla’s past comes forward.

Chicago PD Season 9 Episode 10 will air on Wednesday, January 5, 2022, at 10 p.m. EST On NBC. If you prefer live television, the episode will be available on Peacock TV, YouTube TV, Sling TV, Hulu+, and Fubo TV. The episode will also be available on Google Play Movies & TV, Vudu, and Amazon Prime Video on demand.

Halstead has 36 hours to make a decision, according to the Fed. Moments later, Halstead hears gunfire and responds to shootings on a bus while on his approach to a fresh crime scene. Everyone, including the suspects, is running, and Halstead is the only one on the scene. He tries to help the bus driver who has been shot, but she has died. Halstead discovers a note left by the driver. As investigators piece the puzzle together, they believe the motorist felt a young woman was in difficulty and was attempting to assist her. Joy, the driver, was attempting to assist a young woman who may have been a victim of sexual exploitation.

Hasltead informs Voight of NOrth’s bargain and asks to be included in whatever decisions are made going forward, stating that Hailey must be excluded. Voight informs Trudy that he needs to discuss some issues with her. They got a tip at a motel and discovered blood all over the place, so they tried to jack a car. When they split up, Voight meets Willa, a female, and a boy. He keeps Voight at gunpoint and refuses to reveal what Willa is overdosing on. He bolts away. Willa’s stomach has been slashed open as if someone was attempting to extract medications from within her. She’s on the verge of passing out, but they inject her with Narcan. She had 70 actual party balloons filled with heroin burst in her stomach. They inform Willa that she is being charged with drug trafficking and felony murder, but she refuses to give up Mateo and refuses to turn on the other man since she believes he is the good guy who rescued her. Halstead despises the fact that Voight had Platt delve into North and find dirt to use against him. He reluctantly agrees to go along with it if it will get them out. Halstead goes undercover as a drug addict and meets up with Joey, a friend who offers himself up to Halstead in exchange for narcotics.

Halstead catches him up in a vice, and Voight has a brief encounter with him. He informs Joe that his brother will not be assisting him this time. North is his brother. They elicit information from Joe about how many times NOrth has obstructed justice, among other things, in order to free Joey. Halstead informs Hailey what’s going on after she confronts him about leaving her in the dark. They discover that the other guy, Nicky, is Willa’s friend who recruited her. They show another woman, Willa, who died as a result of Nicky and Mateo’s actions. She informs them of the others’ whereabouts. They track down Nicky and apprehend the assailant. Voight and Jay discuss Jay’s future ambitions. Jay admits that he understands Voight is excellent for the city and that he can’t let him go. He must, according to Voight. Halstead joins up with North and performs a quid pro using the knowledge he possesses. North makes a remark about how Voight tainted Halstead. However, it has been canceled. Halstead approaches Voight and asserts himself as an equal partner, saying that after shielding him, he now expects the truth. From now on, he intends to change the trajectory of their relationship. Halstead informs Hailey about the events and invites her to marry him right now. They marry and enjoy a hot, heavy, animalistic lovemaking session at the Justice of the Peace.

Share
Facebook
Twitter
Pinterest
WhatsApp
ReddIt
Previous article
Get ready for tonight with Kidd and Severide in Chicago Fire Season 10 Episode 10 “Back With a Bang”
Next article
Kim Mi-soo, a Korean actor who starred in the film “Snowdrop,” died at the age of 29.