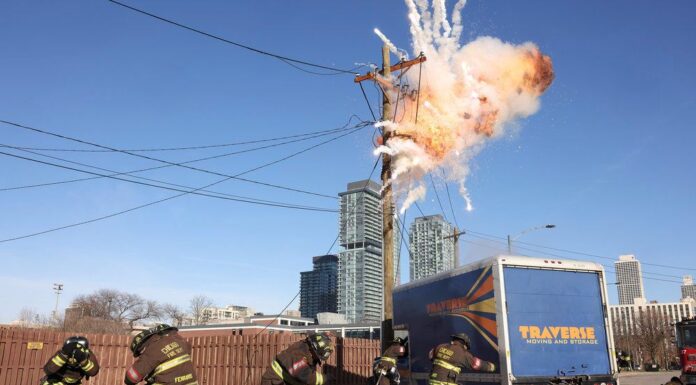 Chicago Fire season 10 episode 10 delivered an action-packed episode. Of course, Kidd’s (Miranda Rae Mayo) return after a few weeks away was the episode’s biggest highlight. The episode also gave Ritter (Daniel Kyri) a chance to shine, as he took a personal interest in helping a young cop work through the trauma of witnessing a truck driver’s brutal death. Are you curious as to what the men and women of 51 will do tonight?  At www.tvacute.com, you’ve come to the perfect place to get the Chicago Fire Season 10 Episode 11 promo and synopsis titled “Fog of War.”

This week, it appears that 51’s newest Lieutenant will be in the heat after a joint call with another firehouse goes awry, resulting in an injured party blaming Pelham (Brett Dalton). According to the promo, a young fireman is being injured by a power line while on a call Pelham is directing. Following the incident, the firefighter blames Pelham for her injuries. While Pelham tries to clear his name, Boden investigates the incident. Will someone come forward to assist 51’s newest Lieutenant?

Chicago Fire Episode 10.11 Synopsis: On a call with Station 37, a firefighter is struck by a power line and decides to lash out after her injury; Brett is visited by Scott and Amelia; Violet gets a surprise envelope; the rest of 51 enters a contest.

‘Chicago Fire’ season 10 episode 11 will air on January 12, 2022, at 9 p.m. The programs are 42 minutes long and air every Wednesday. Where to Stream Chicago Fire S10E10 Online?  It’s also available on NBC’s official website and app. All of these services and more will be able to stream the episode. such as Fubo tv, YoutubeTV, Direct TV The episode is available on Hulu and Peacock a day later. Amazon Prime Video, iTunes, Microsoft Store, Vudu, Spectrum, and Google Play also sell or rent the episodes.

Stella was spotted in Severide’s apartment. Severide was taken aback when she abruptly left him and the firehouse for no reason. She told Severide, however, that she had never left for anyone else and that she only loved him. The next day, she joined Firehouse 51 after apologizing to Chief Boden for resigning from the Lieutenant job, which was finally given to Pelham. Soon after, 51 received a call about a big fire that had spread throughout a tunnel, trapping individuals within. Eventually, the team was able to get everyone out safely. However, things began to spiral out of control since many potassium containers were heating up and threatening to explode at any moment. Boden requested that Herrmann keep the containers cool and away from the chemical. The reaction would otherwise result in an explosion.

Ritter, on the other hand, went on to save a young police officer called Dillon, who had been devastated after failing to save a truck driver who had died in a fire. Meanwhile, fire extinguishers arrived just in time, and the team was able to put out the fire before the potassium exploded. At the station, Ritter urged Mouch to find out more about officer Dillon because he wanted to make sure he was okay. Later, he received a frightening note from Dillon, prompting him to rush to his flat. Ritter spoke with Dillon and told him about his first fire, which nearly drove him out of his work. Dillon was eventually benefited from the chat, and he decided to stay in the police department. Stella, on the other hand, appeared to be attempting to spend time with Severide. Severide, on the other hand, was a little further away. As a result, she confided in him about the odd distance between them and Severide. Severide eventually told her about his reservations and asked if she was still willing to marry him, to which she said no.