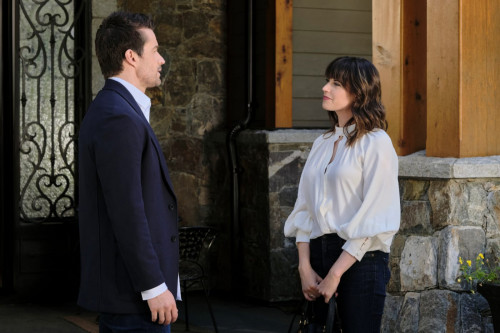 In Chesapeake Shores Season 5, we saw Evan (Robert Buckley,) overcame dyslexia on his own and amassed a fortune without assistance, but many others have done the same. Most of them aren’t really likable. But, given her experience with Trace, it’s ludicrous that Abby would find this person attractive in the long run. Trace, at the very least, tried to calm down. His true calling, though, was music, and in order to pursue it, he needed to be on the road. He flitted back and forth between his profession and Abby on a regular basis, but he never flitted for the sake of flitting. Jay has a great personality. Jay is concerned about the well-being of his friends and family. He wants to make a home for himself. And if he tried, he couldn’t be more tolerant and understanding. Despite this, he’ll never get anywhere with Abby.

What will happen next? tonight, you’ll get a glimpse of Abby O’Brien’s big question: Is Evan Kincaid attempting to seduce her? Is he looking for something other than business? Fans of the Evan/Abby relationship will be excited to see how their relationship develops. We don’t yet know how this well-known business trip will play out, but there will almost certainly be embarrassing situations and perhaps even the start of a romantic narrative! If there is a love story blossoming here, we’ll see the climax of it in this weekend’s show. I’m confident you’ll appreciate the series as much as I do for its romantic chemistry. The majority of fans are anticipating the latest Chesapeake Shores Season 5 Episode 8 with bated breath. www.tvacute.com, he knows all about what you’ve been looking for in the upcoming Episode 8, “Where or When?.” Watch Chesapeake Shores Season 5 Episode 8 Promo and Photos.

Chesapeake Shores Episode 508 Synopsis:  the O’Briens face some potentially life-changing news in “Where or When?” Abby (Ory) is preoccupied when Evan (Buckley) whisks her away on a business trip and has something important to tell her. Bree learns about Luke’s (Stephen Huszar) past from an unlikely source. As Sarah (Jessica Sipos) makes a decision about whether or not to accept her job promotion, she and Kevin (Penny) contemplate sharing some news with the rest of the family. When an anonymous person leaves a negative review for the B&B, Jess (Mailey) and David (Carlo Marks) try to figure out who would have written it. Megan’s (Niven) work on the exhibit reconnects her with an art critic friend from New York, who brings out a side of her that Mick (Williams) has never seen. After receiving a mysterious package from an old friend of his own, Mick ventures on a trip that could be more trouble than he expects.

Evan is invited to stay at the O’Brien house on a temporary basis. Abby (Meghan Ory) even has Mandrake (Wesley Salter) call him, and he basically takes care of everything. Nell (Diane Ladd), Abby’s grandma, makes Evan rest on their couch. Evan demonstrates how to develop her own video game to Abby’s daughter Caitlyn, who is struggling to identify her gift. Mandrake also tells Abby that his name isn’t truly Mandrake and wonders if Evan will ever tell Abby about how he injured his back. He appears to agree with Jay (Greyston Holt) that Evan likes Abby. Sarah (Jessica Sipos) learns she’s up for a promotion to lieutenant just as Kevin (Brendan Penny) and her are trying to start a family. However, she is taken to the hospital after falling from a ladder while hanging a banner. The doctor provides good news for the couple- Sarah is expecting a child!

Jay, who plainly likes Abby, teaches Caitlyn to play the guitar and discovers Evan on the couch. Abby makes the awkward introductions, Evan requests guitar lessons from Jay, and Jay declines. Evan will be able to walk around soon after that. Bree (Emilie Ullerup) may have inadvertently invited Jerry (Matthew Kevin Anderson) to Jess’ (Laci J. Mailey) wedding as her plus one, but she isn’t torn between him and Luke (Stephen Huszar). She is aware that she must disappoint Jerry, but he appears to be OK with maintaining a professional demeanor when they converse.