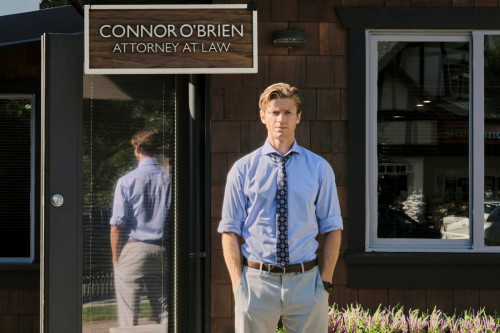 Chesapeake Shores Episode 509 Synopsis: It’s an unforgettable “Chesapeake Shores,” when the family gets some unsettling news about Mick. The O’Brien family learns that Mick made a distress call before his plane went missing and must come together while they wait for news on his whereabouts. Evan (Buckley) starts to bond with one of the O’Briens, but his attempts at generosity backfire. After Luke (Stephen Huszar, “Letterkenny”) finds himself in a bad position with his parole officer, Bree (Ullerup) enlists Connor’s (Francis) legal help. Feeling the strain of running his own business, Connor searches for a new assistant and gets some unexpected support. Kevin (Penny) helps Sarah (Jessica Sipos, “Charmed”) with her new cravings as they try to figure out the right timing to finally share their news with the family. David (Carlo Marks) receives a disturbing warning from his father. Recent events have Megan (Niven) thinking about the future as the day of the art show she put together arrives.

Kevin and Sarah are overjoyed at the prospect of having a child. For the first trimester, they’ll keep it a secret. The promotion was accepted by Sarah. While Kevin and Abby are in Connor’s office, he receives his first call from Gran. Abby is heading on a business trip to Ohio and will stop in Pennsylvania to speak with Evan’s board. Eugene Seeger owns the ashes, and Mick and Gran have no idea who he is. Mick believes he won’t be able to spread this man’s ashes unless he knows who he is. Jess and David are having a great time as newlyweds. Bree is enraged, and she becomes even more enraged when he admits to assault and battery.