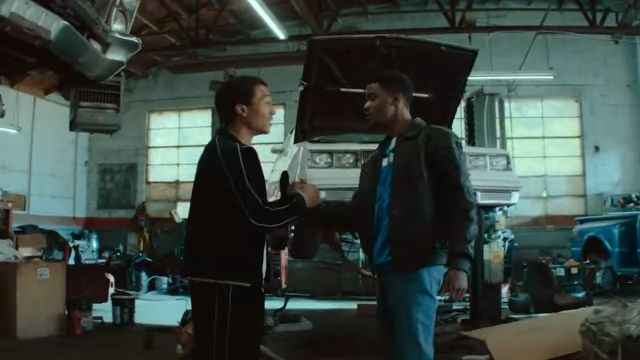 BMF, Starz’s new hit crime series, is a big hit. The series follows the infamous Flenory brothers in real life. Desmond “Southwest T” Flenory (Da’Vinchi) and Demetrius “Big Meech” Flenory (Lil Meech Jr.) They entered the drug trade to escape poverty, but it grew into something far more. With the rise of hip-hop, they expanded into the music sector.

The first season of BMF, with eight episodes, is coming to a close. But episode 7 isn’t on Nov. BMF Episode 7 is postponed. Starz looks to be postponing the seventh episode by a week. There will be no BMF on November 7. Instead, it will air on Nov. 14.  The series conclusion, “The King of Detroit,” will run soon before Ghost’s season debut, “Free Will Is Never Free,” on November 14. But tvacute.com has a preview for Black Mafia Family Episode 8, which you can watch below…

In BMF episode 6, Lamar (Eric Kofi Abrefa), a rival of the Flenorys, goes insane. He was banished from Monique (Arkeisha “Kash Doll” Knight) and her daughter’s lives. In his wrath, he also stabbed his old friend and a small youngster named Darius. The Flenorys appear to be dealing with the aftermath in episode 7. In the episode description, “Blood flows into the streets when Meech plans revenge, prompting Lamar to seek shelter with a friend.” We’ll assume this someone “near” is Kato (Ajiona Alexus), a Flenorys traitor. Eminem will also appear as White Boy Rick in this episode. yet we have no synopsis, but you can watch the promo to understand the better episode.

BMF Episode 8 Synopsis: In an effort to expand into new territory, Meech discovers a disturbing alliance then hatches a plan to eliminate the threat; Terry is forced to make a life-altering decision.

BMF Finale Episode 8 will release on November 21 from 9:00-11:00 p.m. ET on Starz.  The drama series Black Mafia Family has an eight-episode. BMF Episode 1 is available for streaming on Starz also available on HULU. The series premiered worldwide across all Starz platforms. This season’s conclusion, by the way, airs at the same time as the second season of Power Book II: Ghost.

What About ‘BMF’ Season 2

Starz has already ordered a second season of BMF, even though the first season has only two episodes left. Though creator Randy Huggins and executive producer 50 Cent have been mum about what fans may anticipate next, they have made a few subtle hints. Those who know the Flenorys’ background know that their business extends to Los Angeles and Atlanta. Season 2’s business may expand to the following seasons.

Nicole and Darius were nowhere to be seen, so Meech and Terry searched the hospital.Det. Bryant and Det. Lopez paid a visit to the teen and asked him to attend to the police station for questioning. Meech and Terry were barred from accompanying her by Bryant and Lopez. Nicole told her mother and father the truth when she arrived at the station. Despite witnesses reporting the boy attempted to impede her kidnapping, the police questioned the teen about the incident, and she claimed she had no knowledge of it. They tried to persuade her to reveal her brothers’ involvement, but she refused. They even revealed that Meech and Terry kidnapped a girl, implying that this is vengeance. Her parents, on the other hand, sheltered her from police inspection. Despite the circumstances, Meech mapped the BMF brothers’ new course a few steps ahead of schedule. He met with Tiny to finalize his agreement with his erstwhile adversary.

Meech did recognize and greet White Boy Rick (portrayed by Eminem.) Charles began to pack up his family and go because Meech and Tee’s activities put them in danger. Even though Nicole didn’t go with him, Charles heeded Lucille’s warning that she would! While packing up his sawed-off shotgun, Lamar plotted his psychotic retribution against Meech and Terry to the tune of Teddy Pendergrass’ “Turn Off the Lights.” Tiny and a few goons opened fire in a drive-by shooting, wounded Lamar. They broke into the house and scoured it clean, but there was no sign of him… only blood trails. They assumed he was still there, but they had to go since the cops were approaching. Later, Meech confronted the batters, chastising them for missing Lamar! Meech knew he wouldn’t go to a hospital to get his wound treated, so he pondered his options. After being shot in the shoulder, Lamar broke into Monique’s home to treat the gunshot wound himself.

Monique was astonished to see the man when she returned home with Zoey, and he hushed her to explain himself. She threatened to call the cops if he didn’t leave, and they got into a fight; he knocked her down and choked her until Zoey intervened. Meech then went to see Monique and found out about her attack. She remembered Lamar hiding a crash pad… Lucille tracked for their previous lawyer in an attempt to encourage her to deal with them once more. They might have a case if they can locate the attending nurse from Terry’s surgical room. Kato almost escaped arrest while at the bodega as police rolled up on some 50 Boyz slanging. She got wind of it and changed out of her drug dealer garb to bail and call higher-ups. When Kato told Terry and B-Mickie about the sweep, the latter wondered why she hadn’t been hauled down as well. Tee was informed by Meech that he had to deliver bad news to his connection. B-Mickie was gungho when Meech told him he had a location on Lamar.

Meech, on the other hand, forced him to cease his relationship with Kato, claiming that “the rules are the rules!” Meech and B-Mickie entered the area where Lamar could be, masked and with silencers on their weapons. They noticed bleeding bandages and B-Mickie was about to shoot the back of the chair, assuming it was Lamar when Meech redirected his arm. It was a young bot that was alone at home. They fled after Meech handed him a packet of hush money. Terry paid a business visit to Big L at an art gallery. He required a re-up schedule extension, and she wouldn’t give it to him! The streets were scorching, and the BMF brothers had to plan their next actions carefully. Terry, on the other hand, had to leave the conference early to attend Darius’ burial. Following that, Darius’ parents confronted Nicole about not telling the police the truth about their son. Kato dashed to B-residence, Mickie’s where she hysterically confessed to f*cking an officer and maybe killing him! The consul morphed into sex almost instantly.

B-Mickie dashed to the store after the session and wanted to speak with her when he returned. Kato mistook B-Mickie for B-Mickie when he returned from the grocery, but it was Lamar! He expressed concern about their relationship, to which she responded that it was to get closer to the inner circle. He asked that she execute Meech for him in exchange for his catching a body and paying the price. He would murder her if she didn’t. When B-Mickie returned to his position and watched Lamar leave his house, he went for his revolver but left it inside. He drew his revolver as soon as he entered the house, despite Kato’s best efforts to appease him with food. He confronted the woman about Lamar right away. She told him all she had been up to. When Lamar and Kato’s father used to run together, he would take care of her body and eat the charge for her. It was B-Mickie who worked it out… Kato was pretending to be him! She said that things changed after she fell in love with him. She talked him down and suggested that they both take out Lamar so that they wouldn’t have to notify Meech. Either I or the Streets Terry apologized for what had happened to Darius while the family was gathered for supper. Lucielle begged with LaWanda in private to persuade Terry to leave the drug game, knowing well well that she had lied for him. Lucielle could have a voice to speak to her precious child, LaWanda broke down and claimed she’s not for the drug dealer lifestyle.

LaWanda confronted Terry about leaving the game later that night… Either she and their boy or Meech and the streets are the options. Meech and Tee, however, devised a plan to return to the trenches with the soldiers in order to boost their crew’s allegiance. Det. Lopez and Bryant saw a group of former 50 Boyz on a wet day and pursued them. Meech was one of them, and the cop tackled him until Kato hit him in the back of the head with a huge rod. Meech was taken aback when he saw who had freed him from capture. Bryant arrived to offer assistance to his companion through radio. Det. Lopez died in surgery because his injuries were too serious! Det. Bryant and Commander Marceline Beckwith were present when the dreadful news was delivered. When Bryant attempted to leave, Beckwith challenged him about Lopez’s claims that he and Meech had formed some sort of alliance and that he had overheard the two conversings. Byrant said that he was worried about his assassinated colleague. Beckwith threatened to bury him and his badge if he was a filthy cop. Bryant visited with Meech to inform him of his partner’s death. The two had a power struggle but were forced to terminate their ties. Byrant would now be in charge of policing the criminals.