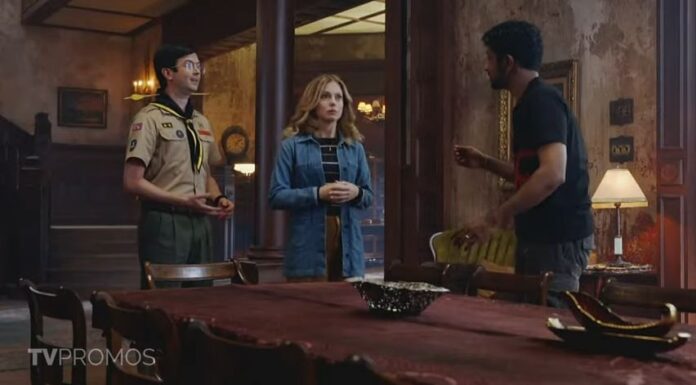 In the previous episode of Ghosts, Sam (Rose McIver) pitches the ghost’s colorful backstory, another hilarious episode of the great new spooky comedy pushes ’60s hippie Flower (Sheila Carrasco) into the forefront. Till now it has been seven episodes, tonight the eighth episode is going to air. Fans are now eager to discover more about the latest episode of Ghosts (2021). At www.tvacute.com, you’ve come to the perfect place to get the Ghosts Season 1 Episode 8 “D&D” summary and trailer.

Sam encounters the souls of three British soldiers in one of the big estate’s structures in tonight’s episode of the hit CBS comedy. Their commander, Nigel, is one of them, and Isaac has a difficult history with him. When Nigel arrives at the main house, Isaac is forced to confront a major secret he’s been keeping hidden for a long time. As the narrative progresses, Isaac’s unsaid realities become more apparent.

Ghosts (2021) Episode 8 Synopsis: After Jay is kicked out of a Dungeons & Dragons game with his city friends, Sam agrees to facilitate a new one between him and the ghosts; Isaac confronts his feelings for Nigel, a ghost from whom he’s been keeping a gigantic secret.

New Series Ghosts Episode 8 will release on November 18. “Ghosts” premieres on CBS on Thursday. Each episode will premiere on Paramount+ on Thursday nights at 9 p.m. ET/8 p.m. CT, (at 8 pm on NewsChannel5.) the same day it airs on CBS. The CBS All Access app has been renamed Paramount+, and you can now watch new episodes of “Ghosts” with Live TV the day after they premiere on Hulu.