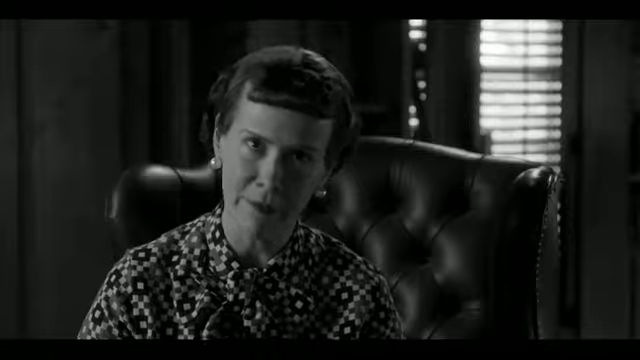 An Australian actor Cody Fern as Valiant Thor, a gorgeous connection between humans and aliens, was introduced in the penultimate episode of “Death Valley.” He assured President Eisenhower will one day unite the world and usher in a new period of peace for humanity. we also got some scenes of Marilyn Monroe, President Hoover contacted Nixon (Craig Sheffer) after learning that she was yelling about aliens on movie sets. Ike and Valient then took Hoover to Area 51 (a secret base), where they explained how the world actually works to him. Troy’s baby didn’t quite satisfy the criteria for an ideal specimen at Alien HQ, so his captors slashed its throat. Since 1969, Calico’s been bringing the entire gang the set where Stanley Kubrick directed America’s phony moon landing. Episode 9 ended with Cal’s and Troy’s child being born on the set of the fake moon landing. It was a strangely emotional ending to the story. Ryan Murphy’s anthology series AHS 10 coming to an end, Next week AHS: Double Feature finale will air. So, what can you anticipate seeing during the finale? We know there will be a season 11 because AHS is known for hiding Easter eggs. You may obtain a promo at www.tvacute.com for AHS DF: Season 10 finale release date and summary, which will help you better understand the episode. Below is a recap of AHS: Death Valley episode 9.

AHS NYC Episodes 5 and 6: What is the secret of Patrick?
AHS: Death Valley Finale Recap

To begin with, The Double Feature finale episode title is “The Future Perfect,” will be about attempting to protect humanity’s entire future. according to the finale summary, it will focus on Mamie played by Sarah Paulson. she takes control of the situation, and the future’s fate is revealed. Mamie Eisenhower (Sarah Paulson), who is under their control and informs her husband that he must cooperate with the aliens. She believes the purpose is to obtain their superior technology, particularly microwaves, in order to save Earth.

Each week, Paulson enthralled viewers with her portrayals of Tuberculosis Karen and Mamie Eisenhower in “AHS: Double Feature.” but her position in the first part was limited, and it’s yet unclear if she’ll have a major role in the Death Valley. In the AHS finale promo; Valiant’s prediction that the perfect specimen will be born in 2021. Is he referring to one of the four friends’ children, or is he alluding to Harry and Doris’ son from “Red Tide”? for this we have to wait for the finale episode, till then to watch the promo here.

In the AHS Series, why have aliens come to Earth?

Because their planet is dying, and that in order to survive, they must create a powerful species that is half-alien, half-human, by eating black tablets in Red Tides. The president of Death Valley agrees to let American Horror Story’s aliens abduct 5,000 Americans per year for experimentation as long as it’s kept secret and they aid promote US technological breakthroughs. In the present day, the four abducted college students are significantly pregnant and detained in an alien-human holding facility. As they meet the other residents, they learn that some people can slow down the aging process, the presence of Steve Jobs in AHS, they receive assistance in furthering their own technological inventions. As aliens have provided humans with rapid technological advancements ranging from the microwave to the iPhone.

Will AHS 10 reveal the answers to the Alien mystery of Asylum?

The aliens in Death Valley and Asylum may be of the same race, although they both concentrated on human abductees. This may be the case since Kit Walker’s alien-induced children grew up to be extraordinarily successful humans. Abducting Kit and his family would have happened after the bargain introduced by American Horror Story season 10, therefore Asylum’s aliens may have been included.

What time does the finale episode of AHS Double Feature air?

AHS Double Feature; Part 2 Episode 10 titled “The Future Perfect,” will release on FX on Wednesday, October 20 at 10 p.m. ET.  The following day, Thursday, October 21st, the episode will be accessible on FX on Hulu. At 5 a.m. EDT, the streaming platform updates the collection with new episodes. As a result, AHS S10 E10 should be available around that time on the platform.

AHS Finale Episode 10 of Double Feature Part 2 can also be viewed with your active cable subscription data on FX’s official website or FX Now. Live TV streaming services such as Fubo TV, Philo TV, Sling TV, YouTubeTV, DirecTV, and Hulu + Live TV are available to those without a cable subscription. A day after the episode airs on television, it will be available on Hulu. The seven-episode season of the all-new American Horror Stories anthology program is also available exclusively on Hulu.

The flashbacks in American Horror Story: Double Feature continue the plot from the previous episode. President Eisenhower as blackmailed by an alien-possessed Mamie (Sarah Paulson) to sign the pact. The aliens will give cutting-edge technology in exchange for 5,000 American test subjects each year. After transforming Mamie back into a human, an alien representative who resembles a cyborg, Valiant Thor (Cody Fern), fulfills the promise made by the aliens by giving the president access to technology that he claims will one day evolve into the cellphones that we 21st-century people value so highly. Ike overhears weird screams coming from the White House basement while Mamie is back to holding parties. He finds Valiant doing experiments in a covert nuclear facility after doing some investigating.

Ike is understandably unhappy with the experiments taking place right in front of him. So Maime advises that he relocate the business to Nevada, giving Area 51’s enigmatic past some context. The following night, Ike hears his wife wailing in joy rather than screaming. He investigates the noise and finds her in their bed having sex with Valiant Thor, whom she now affectionately refers him as just Val. Ike grips his chest and faints at the sight. Later, when he wakes up, Mamie assures him that what he witnessed was only a “dream,” not a nightmare. Ike is disturbed about the relationship, but Mamie dismisses his worries because Val isn’t literally “flesh and blood.” Nixon (Craig Sheffer), who already has a failing marriage, then plays Ike a clip of Marilyn Monroe (Alisha Soper) ranting about aliens. Nixon advises making use of Marilyn’s penchant for medications and booze after realising John Kennedy (Mike Vogel) revealed the information. It turns out that Marilyn is at home when two men break in and force her to take a drug overdose. In last week’s episode, Double Feature discussed the JFK assassination.

As a result, “Blue Moon” skips to a conference with Valiant, Ike, Nixon, and President Lyndon B. Johnson (Karl Makinen), who assumed office following JFK’s assassination, at Area 51. Valiant exposes a room full of alien infants floating in fluid there. The scene serves as the ideal prelude to the present, as Troy (Isaac Powell) is giving birth to his extraterrestrial child while Theta (Angelica Ross) is watching over him. They cut into his stomach and retrieve a newborn alien/human hybrid, which finally answers his queries regarding how the kid will exit him. Unfortunately, that infant is killed by Theta’s team because of its physical anomalies, which make it an inferior specimen. A week later, the scene jumps to Troy reuniting with Kendall (Kaia Gerber), Jamie (Rachel Hilson), and Cal (Nico Greetham). Calico (Leslie Grossman) discloses that they are being kept in Area 51 as Troy explains what happened to them. She also says that she has two or three “pups” a year, but like Troy, her offspring are slaughtered because of their abnormal features.

She then takes them to space where renowned filmmaker Stanley Kubrick (Jeff Heapy) staged the moon landing in 1969. Her account causes a memory trip to 1969, when Calico met Buzz Aldrin (John Sanders) and Neil Armstrong (Bryce Johnson) in a pub. The issue is that following the moon landing a few days earlier, they theoretically ought to have been in space. The two astronauts admit that the moon landing was a hoax after drinking. As a result, Calico punished for uncovering their secret by being kidnapped and taken to Area 51, just like Marilyn Monroe. Cal informs Troy that he believes the baby is on the way but that he does not want to give the child up while they are in the lunchroom. Troy therefore comes up with a plan to operate on Cal himself in the moon landing room and deliver the baby. Although Cal delivers the child successfully, it resembles Troy’s alien traits. The guys are content nonetheless, though. Unfortunately, the baby’s lower half has tentacles that grasp onto Cal’s face in a manner reminiscent of what occurred after Amelia Earhart (Lily Rabe) gave birth in an earlier episode.