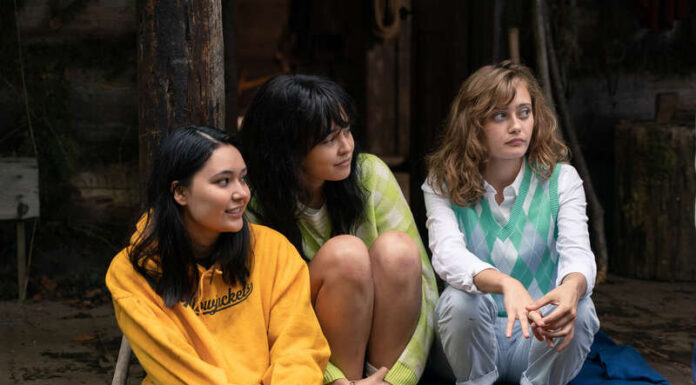 On in Yellowjackets Season 1 Episode 3, The girls are stuck in the woods for three days in 1996. a short ceremony for the departed. The group discovers an old cabin in the woods along with a lake. It’s a nice spot to hide, but the food is bad. Taissa had to force Lottie into the cabin since it smells horrible. In Yellowjackets 3 continues Misty and Natalie’s road adventure. Natalie quickly confirms her concerns that Misty tampering with her car. To discover more about the dancer’s dramedy series, Yellowjackets eps- 3, read the recap below from www.tvacute.com, which will help you understand the episode better. What can we expect from the 10th episode? We’ll have to move on in order to see this. The fourth episode, titled “Bear Down” promises to be more interesting. You can find photos for Yellowjackets Episode 4 as well as a summary here.

With each episode, Yellowjackets becomes more dramatic, and it will be fascinating to see what the house in episode 4 represents. The girls uncover guns and use them to figure out who is the most responsible. maybe they’ll discover guns inside the cabin. They’ll most likely have to start looking for food after that. Natalie must confront her prior habit of attempting to mend damaged men, while Taissa attends a banquet where she will be pitted against a group of wealthy guests eager to delve into her past.

Yellowjackets Episode 4 Synopsis: The girls play with guns to determine who is the most responsible. Natalie untangles a lifetime of piecing together broken men. Taissa greets the rich. (directed by Deepa Mehta and written by Liz Phang)

Yellowjackets Episode 4 will release on December 5. It premiered on Showtime a week early, and fans are already enthralled. Yellowjackets air new episodes on Sunday nights at 10:00 p.m. ET/PT, after Dexter: New Blood. Yellowjackets will have a total of ten episodes in its first season. Available on Fubotv | Amazon Prime | Roku | Direct tv

The girls are stuck in the woods for three days in 1996. a short ceremony for the departed. Soon after, they must choose between staying at the plane to await a rescue squad or moving to a nearby lake Taissa. Jackie is the most ardent proponent of staying beside the plane, but she is rapidly overridden. Even Shauna votes for the lake, causing a split between the two best friends. Given their dire need for food and water, migration to freshwater seems sensible. When they get to the lake, they make a note on the plane stating they’ve gone. The group discovers an old cabin in the woods along with a lake. It’s a nice spot to hide, but the food is bad. Taissa had to force Lottie into the cabin since it smells horrible.

In 2021, Taissa is dealing with her son’s behaviour and an opponent’s political attack ad. After all, she set out to make a difference, not get caught up in the nasty politics of it all. It’s difficult to defend her when the political ad implies she’s dangerous. Sammy strikes a child on the playground for joking about Taissa. But Sammy isn’t sorry at home. He immediately doubles down on his creepiness, insisting Taissa “isn’t the nasty one.” So, who? Simone? Who else?

Taissa is working with “reporter” Jessica, who has gone shopping. Taissa hired her to check if any more survivors would talk for the proper amount of money. Jessica gives Taissa a hint regarding her opponent’s daughter. She’s 18 now and has spent time in treatment. With this knowledge, Taissa threatens her political opponent not to run any more attack ads against her, or she’ll publish his daughter’s photo and drug history in the newspapers.

The most terrifying revelation in Taissa’s tale this week is that something has been haunting her since she was a child. In a flashback within a flashback, Taissa is visiting her dying grandmother, who freaks out after seeing a spectral image in the mirror.In a terrifying disclosure, the baby Taissa lifts her grandmother’s eyelids at the burial to inspect her eyes, the adult Taissa enters the cellar and steps on a doll eye plucked off Sammy’s doll Manny, and the teenage Taissa finds the dead body in the cabin’s attic. Yellowjackets 3 continues Misty and Natalie’s road adventure. Natalie quickly confirms her concerns that Misty tampering with her car to guarantee they could go see Travis together.

In Travis’s cabin, it looks like no one has been there in years. Since no one responds, Natalie breaks a window to see inside. They’re soon arrested. Natalie phones Taissa, who often bails her out of jam and paid for her treatment. But she has too much going on to save Natalie now. Misty frees them by dialling Kevyn Tan. She’s been pretending to be Natalie since she saw Kevyn fawning over Natalie at the bar. He saves them. Natalie and Misty drive to Travis’ workplace and find him hanging from a barn’s rafters. Natalie is certain Travis didn’t kill himself. Others did. Misty gives her a message she found in Travis’s house: Tell Natalie she was correct. What’s wrong? Natalie is certain Travis was murdered.

Shauna read a text from Bianca on Jeff’s phone. They agreed to meet at their “usual spot.” Shauna follows him to a hotel to corroborate her suspicions of an affair and meets Adam. Shauna compulsively checks the door for her husband. She finally sees him go with Bianca. Shauna and Adam share a hotel room toward the end of the episode.