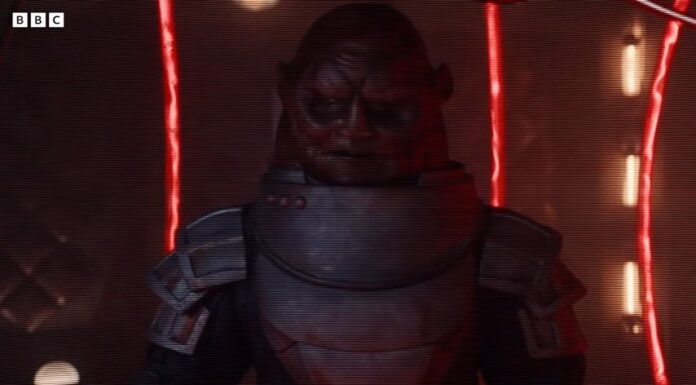 In the previous episode 5 of Doctor Who: Flux, the Doctor frees herself from stone. Her buddies are gone, and she’s no longer a Weeping Angel. When the Doctor wakes up, an Ood is scanning her. She’s in Divison. Yaz is in Mexico with Dan and Jericho. In 1904, they break into a temple and find a rare pot. Then they’re in Constantinople. This episode closes with Azure and Swarm arriving at Division, killing Tecteun, and preparing to pursue the Doctor.  To know more read the recap below. Now, What can fans expect from the final season of Doctor Who Flux Final Chapter 6 – “The Vanquishers”? To have a better sense of the show, check the promo and summary for this new Doctor Who Season 13 Episode 6 with www.tvacute.com below.

On December 5, in ‘The Vanquishers,’ is the final episode. We already know it will be tremendous the Doctor’s time appears to be running out as evil ravages all worlds. and it will serve as the epic conclusion. The Vanquishers official synopsis: “In the grand finale of the Flux narrative, all hope is lost. The evil forces are in charge. But who will defend the cosmos if the monsters win?” The BBC has also confirmed that Rochenda Sandall and Sam Spruell would reprise their roles as The Doctor’s wicked siblings Azure and Swarm. This time, Thaddea Graham plays Bel, the traveler who fled the Cybermen and Daleks to find love with Vinder before the Flux split them apart. Professor Jericho is played by Kevin McNally from Pirates of the Caribbean — and The Doctor will certainly need all the academics available to stop the flux! Finally, this confrontation should be one of the most thrilling and significant in recent Doctor Who history. We’re talking about a fight involving various alien specialties, The Doctor, and her companions. There’s a chance that there will be a cliffhanger at the end of the season, so plan appropriately.

Following the serialized story Flux and the upcoming 2022 specials that will conclude with the Thirteenth Doctor’s regeneration, Jodie Whittaker has stated that she is leaving Doctor Who on a “real high.”

Whittaker’s departure from the role was confirmed earlier this year, following months of speculation, with returning showrunner Russell T Davies expected to deliver a big creative shake-up to the long-running series.  However, no information on who will be the next face of the TARDIS or what state the universe of Doctor Who will be in when the Chris Chibnall period ends has been released.

Doctor Who: Flux S13 E06 Synopsis: In the final epic chapter in the story of the Flux, all hope is lost. The forces of darkness are in control. It’s up to Doctor Who to save the universe.

Doctor Who: Flux Episode 6 will release on Sunday, December 5, 2021, The show will only be available on BBC America, so make sure it’s included in your cable package. The episode is also available to view on BBC America’s official website and app. Subscribers to AMC+ will be pleased to learn that BBC America is now available on the streaming platform. Aside from that, HBO Max has all prior seasons of Doctor Who available to stream.

If you miss the show on BBC America, you can catch up on the latest episodes by visiting the network’s official website or using the BBC app. Sling TV, Fubo TV, Hulu+Live, Xfinity, Spectrum, and YouTube TV all have season 13 available. So stay tuned for more exciting episode previews and don’t miss the next episode.

Jacob Anderson, Robert Bathurst, Thaddea Graham, Blake Harrison, Kevin McNally, Craig Parkinson, Sara Powell, Annabel Scholey, Gerald Kyd, and Penelope Ann McGhie are among the season’s guests stars. The Sontarans, Weeping Angels, Cybermen, and Ood will all be back, along with a slew of new monsters, including the aforementioned Karvanista.

Doctor freeing herself from stone. Her buddies are gone, and she’s no longer a Weeping Angel. When the Doctor wakes up, an Ood is scanning her. She’s in Divison. Yaz is in Mexico with Dan and Jericho. In 1904, they break into a temple and find a rare pot. Then they’re in Constantinople. This pot Yaz has apparently can decipher the exact date the world will end. An assassin surprises the trio as they board a boat. After thwarting him, the Doctor’s adaptive hologram helps grasp what’s happening on. They need to find out when the big struggle for Earth will occur after the Flux destroys the cosmos. If not, things will turn ugly.

A hermit in Nepal tells the gang to “Fetch your dog.” The gang realizes this and leaves Karvanista a message. He sees the same notification on his console and grumbles that he can’t time travel. So how does he see it? So what was the point of the mission? No time to rest, more to come! Then we move to 1958 England, when Prentis is out hunting. A mysterious man we later learn is known as the “Grand Serpent” offers him the chance to form a task force. This task force is UNIT, seen in another scene in 1963. The Division seems to have infiltrated UNIT, as this sly serpent continues to kill important members of the group. As the year 2021 approaches, Kate confronts him, promising vengeance and a favor to the Doctor if he isn’t careful.

In the midst of all this comes another exposition with the Doctor and the leader of Division. The Operatives interfere in space and time. They recruit all kinds of creatures and species, yet they aren’t in the universe. They’re not in “Universe 1,” as she describes it. They’re leaving this Universe to start again in a new one.  Anyway, the Doctor is a virus, and this woman is Tecteun, the Doctor’s Mother. The Flux appears to be convergent on Earth, bringing destruction to an end. It’s where the Flux will finish.

The Doctor’s memories are stored in Tecteun’s pocket watch. To save her pals she must return to the fading Universe or rejoin Division with her memories restored. Tecteun tries to persuade her, asking the Doctor to continue exploring this second realm. Of course, the Doctor saves her friends. In 2021, Karvanista seeks down the rogue Lupari ship Bel. Meanwhile, Vinder starts talking to himself, looking for the missing. Swarm and Azure are there to boost the time force. When Passenger spots Vinder, he teleports him to a weird region where Diane, Dan’s date, is.

Dan, Yaz, and the Professor return to 1904 and bump into Joseph Williamson, the tunneling specialist from episode 1. Dan thinks he’s the key, so they head to Liverpool in 1904. They return to Joseph’s side and descend into the tunnels. He’s discovered a lot of different exits. He mentions Flux and its effects, citing Tunnel 9 as a no-go zone. But then Sontarans broke through the passageways. The Grand Serpent assures they won’t be stopped this time, so they board the Lupari ship. This episode closes with Azure and Swarm arriving at Division, killing Tecteun, and preparing to pursue the Doctor.