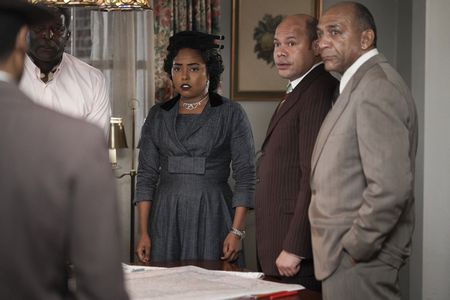 Women of the Movement is a six-part television series based on the actual tale of Mamie Till-Mobley, who risked her life in 1955 to seek justice for her son Emmett, who was cruelly killed in the Jim Crow South. Unwilling to allow Emmett’s murder to go unnoticed, Mamie moved to the world stage, establishing herself as a civil rights fighter and starting the civil rights movement. A one-hour episode of ABC News’ Let the World See will follow each episode of this show. It looks at Mamie Till-life Mobley’s and activism.

Women of the Movement Episode Recap

Women of the Movement: Episode 1 “Mother and Son”

Mamie Till Mobley, a young mother living a simple life in Chicago, begrudgingly lets her adventurous 14-year-old son, Emmett, go on vacation with his great uncle and cousins to Mississippi. Days after his arrival, tragedy strikes and Mamie is faced with a mother’s worst nightmare when her son goes missing.

Women of the Movement: Episode 2 “Only Skin”

After receiving the call that her son was kidnapped by white men in Mississippi, Mamie rallies her community in Chicago to bring Emmett home. As a result, Mamie is thrust into the spotlight while facing unimaginable tragedy.

Women of the Movement: Cast

The premiere of Women of the Movement will air on ABC on January 6, 2022, at 8 p.m. EST. Station 19 and Grey’s Anatomy will be replaced by the series. On Thursday, the second episode will run directly following the first. Hulu makes all episodes available the day after they premiere on ABC.

Women of the Movement Episode 1 + 2 Photos

The Women of the Movement Season 1 Schedule is listed below.