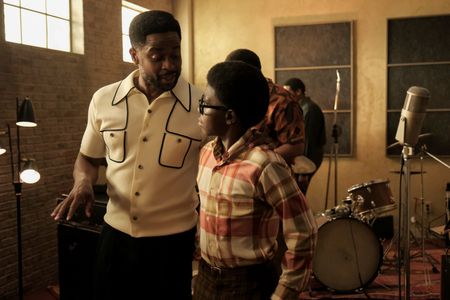 In the previous episode, 3 of The Wonder Years (2021) Dean comes into some “racy literature” and shares it with his classmates. Lillian (Saycon Sengbloh) believes it’s time for Dean (Elisha ‘EJ’ Williams) to learn about the birds and bees with an unexpected twist after he gets in trouble at school. After watching this episode, fans are eagerly anticipating the new fifth episode of Season 1 of The Wonder Years Reboot. Allow www.tvacute.com to provide all of the information you’ll need to watch the new episode 4 titled “The Workplace” of ‘The Wonder Years 2021.’.

The Wonder Years New Episode 4 Synopsis: It’s “Take Your Son to Work Day” and Dean heads to band practice with Bill. But the “grown folks’ business” at the music studio prompts Lillian to have to pick up Dean. While at her office, Dean finally learns what his mom does while he’s at school all day, gaining newfound respect for her career and ambition.

Reminder: don't act TOO happy in front of mom. pic.twitter.com/7yUAAVicme

The Wonder Years Reboot Episode 4 will release on WEDNESDAY, October 13 at 8:00-8:30 p.m. EDT, on ABC. Episodes can also be viewed the next day on demand and on Hulu. “The Workplace” is directed by Shiri Appleby and written by Meredith Dawson & Kendra Cole.

“The Club,” the third episode, is one of the funniest of the first three..Dean and his pals come across nude magazines, prompting his mother, Lillian (Saycon Sengbloh), to give Dean a sex chat about numerous ways couples can achieve closeness. Cheadle’s narration is flawless throughout the episode, but the conversation between mother and son gives both characters tremendous depth and complexity. Elisha Williams, as well as Ray’s Keisa, is just as adorable as Dean. Both kids have an effortlessness about them, especially Williams, who has to walk into potentially awkward circumstances virtually every episode. Williams, Hill, Sengbloh, and Kariuki have tremendous chemistry together, and they could very well be the next great American television family.