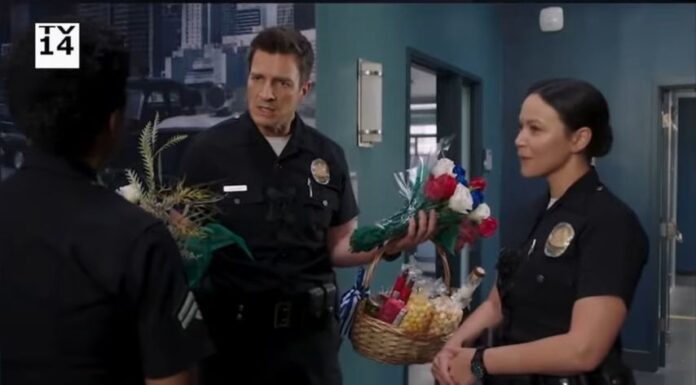 This is what happened on The Rookie Season 4 Episode 11. Bailey got her life back, and they were able to put her future ex-husband behind bars for eight years. As a surprise, we found out that Harper is going to be a mom! Read the recap below. you’ll be eagerly anticipating The Rookie season 4 episode 12  premiere on ABC. So, when? What’s next? (www.tvacute.com) Here’s all you need to know about ‘The Rookie’ Season 4’s twelfth episode, including the trailer and release date.

Recommended: Nathan Fillion and his father appear to be similar in a Stunning Beach Photo

The show is now on hiatus, with no new episodes set to air one week. Furthermore, little hints about what will happen in the next new episode of the season are beginning to emerge. but we’ll have to wait and see what happens next. the next new episode title is “The Knock.” Now the Bailey storyline ends. new stories will start in new episodes. we will see some significant surprises and some twists and turns. Whatever happens, we hope The Rookie keeps some of its characters in focus.

Officer Smitty is played by Brent Huff, Nurse Lisa is played by Crystal Coney, Ashley McGrady is played by Helena Mattsson, ADA Chris Sanford is played by Kanoa Goo, and Officer Gil Webb is played by Jay Hunter. “The Knock” was directed by Charissa Sanjarernsuithikul and written by Zoe Cheng.

The Rookie Episode 412 Synopsis: The team responds to the report of a severed hand washing up on the beach and is on the hunt to find its owner. Meanwhile, Tim attempts to prove he isn’t a control freak to Lucy and invites her on a double date with him and Ashley

The Rookie Season 4 Episode 12 will release on SUNDAY, January 23 at 10 pm ET, on ABC. Episodes can also be viewed the next day on demand and on Hulu. Hard die fans of ‘The Rookie’ can stream the entire season 3:   DirecTV | Sling TV | Fubo TV | YouTube TV | Hulu

How many episodes of Rookie Season 4 are there in total?

TVLine chatted with showrunner Alexi Hawley about the major revelations in the fall finale. While working on Episode 15 of… wait, how many?!, TVLINE ask to showrunner Alexi Hawley, How many episodes are you doing this season? We’re doing 22 this year, a full 22.
TVLINE | What? Nobody does 22 anymore. This isn’t 2018, man.
I know! Look at us. They asked us to do 22, and I asked Nathan [Fillion] if he would be good with it and he said he would, so….

Nolan and Bailey are meeting with Wesley about her ex-boyfriend Jason Wyler and how he framed her in the Rookie episode. Wesley informs John that if Bailey is a convicted felon, he can’t keep dating her. John takes time off from work to discover a means to clear Bailey’s record, and he and Bailey seek assistance from Oscar. Thorsen’s mother, Yvonne, comes to see him and requests that he make a documentary on his unfortunate conviction. Angela is summoned to a murder scene. Lucy is adamant about assisting the young adolescent. Lucy wants Sanford to charge the youngster as an adolescent rather than an adult because the woman in the heist didn’t die, but he refuses. James needs to meet with Curtis Jones, a drug dealer, to persuade him to stop dealing with the youngster, but he doesn’t want Harper’s help since if word gets out that he’s dating a cop, it would hurt his community connections.

Lucy must inform Tamara that her friend is the murder victim of Angela. When John and Bailey speak with Oliver, they discover that Jason is utilizing women who are interested in him to fund everything. James’ encounter with Curtis is being watched by Harper and Thorsen. They do, however, catch a boy stealing and have to chase him down. Becca, the vic, was hooking up with some males through an app that allowed them to meet up with men and perhaps sleep with them in exchange for a place to stay. Bailey and John speak with the lady Jason is now dating in order to get information on him. Harper learns she’s six weeks pregnant while getting stitches in the hospital following the chase. When they were talking to the girlfriend, Jason reappears and threatens to take John’s badge. His girlfriend throws him out. Harper informs Thorsen that she is expecting a child. They question the man with whom Becca had sex and discover that she took a watch from him. Thorsen’s mother texts him an urgent message. When James is about to argue with Harper about her not respecting his wishes, Harper reveals that she is pregnant.

When John discusses the next steps with Oliver, he tells him that Jason would turn himself in because he is being pursued and has nowhere else to go. When John looks up, he notices Jason doing the same thing. Jason surrenders and strikes a deal with the ADA, agreeing to everything. He is sentenced to 18 months in prison. Declan, Tamara’s current friend, is the one who sold the watch to the pawnshop, Chenford realizes. He admits to accidentally killing Becca. Oscar made a deal with a contact, who identified Jason as a cop informant, and now they’ll be attempting to assassinate him. At the top, there is a gunfight. Jason flees with the money, but Nolan follows him. Chris secures a favorable arrangement for the disadvantaged adolescent. Thorsen promises his mother that he will complete the documentary. James expresses regret for how he handled the situation. Bailey and Nolan are in good health. Bailey and Nolan sit down to sip a glass of wine and finally breathe, knowing that Jason will be in prison for eight years and that they will be served with a restraining order when he is out.