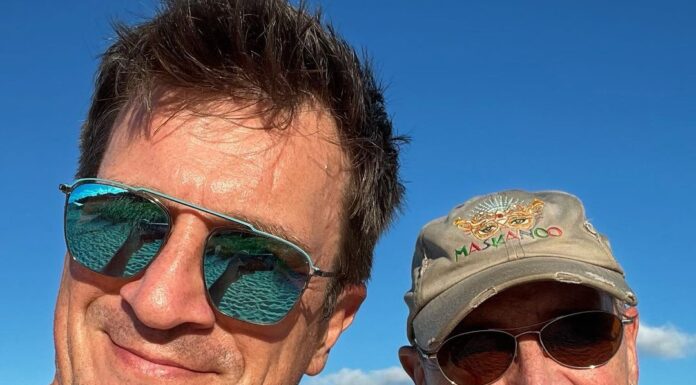 Nathan Fillion rarely posts images of his family, so fans were taken aback when he shared one with his father, Bob. With a beach selfie alongside his father, the Rookie actor left his social media followers seeing double, and even he commented on the resemblance.

Both men had the identical closed-mouth smile in the photo, and despite the fact that their eyes were disguised behind sunglasses.

“As I grow older, I can see more and more how my father tries to look like me, and I can’t blame him.” he laughed.

Remarkable! One fan wrote, he looks too young to be your dad (no offense, of course).while another said, You will know how handsome you will be when you are even older.!

1bloom Omg, what theeee!!! There’s two of you 🤔🤔🤔 then again I did sleepwalk last night and ended up waking up on the kitchen floor with an empty vodka bottle in hand ….I dont drink 🤢🤢🤢 …………lol just jokes but jeez you guys are almost identical

another one said You both look great! Please say hi to your dad for me; he was one of my very favorite high school teachers at St. Joe’s in Edmonton!

Cookie and Bob, Nathan‘s parents, are both retired school teachers, and the actor had expected to follow in their footsteps until he scored a job on One Life to Live and dropped out of college. Jeff, his older brother, works in education as a high school administrator.

Nathan has had a fantastic career since his first appearance on film more than 25 years ago. He has also appeared in Desperate Housewives, Buffy the Vampire Slayer, and Two Guys and a Girl, in addition to Castle and Firefly.

Nathan has been entertaining Sunday night TV fans since 2018 owing to his starring role on The Rookie. The show is currently in its fourth season, and several cast reunions have occurred throughout the years. Many of his former co-stars have made cameo cameos on the program, including Jon Huertas, Annie Wersching, Seamus Dever, and Toks Olagundoye, much to the pleasure of fans.