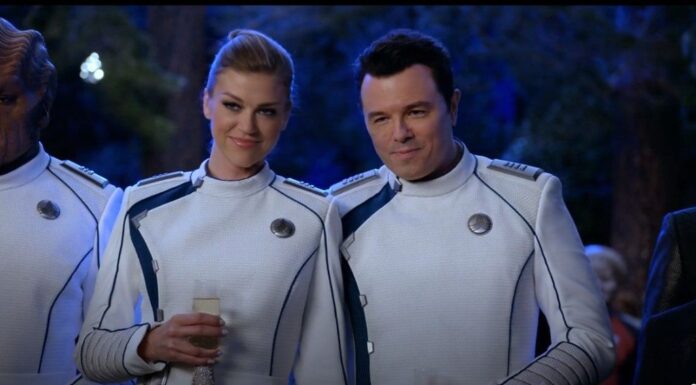 season 3 of Seth MacFarlane’s science fiction sitcom The Orville, which has a finale on Thursday, is titled The Orville: New Horizons. What began as a Star Trek parody has transformed into a program that builds on the moral quandaries and social criticism that the venerable sci-fi series was famous for.   The 25th-century television series, which is currently available on Hulu, centers on the exploits of the spaceship USS Orville. Seth MacFarlane and his crew appear ready to call it a day with The Orville: New Horizons Season 3 Episode 10, which neatly and unambiguously wraps off the series. They have undoubtedly left many storylines open for a future Season 4, but they didn’t take a chance on leaving viewers in suspense in case the renewal doesn’t happen. They close a season that began with the post-Kaylon combat trauma with an unequivocal example of reconciliation while also giving Isaac and Dr. Finn the happiest of endings, one that predicts many future household joys and tribulations. Here’s the recap of The Orville: New Horizons Season 3 Episode 10. 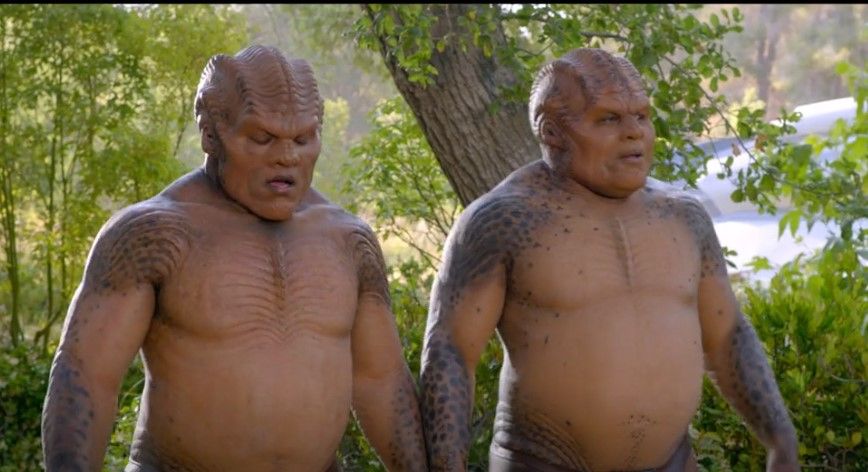 “Bachelor in Paradise” provides the background music as Isaac goes about his daily activities (Henry Mancini). He makes a banana duplicate and gives it to Dr. Finn. Grayson approaches him on the bridge and requests a report on the trans-focal array. The crew is present during the morning renewal ritual on Listak Two for Bortus and Klyden. All are welcome. Bortus will chase Klyden into the forest while completely naked in order to mate with him in order to purify their repeated vows to one another. Since there isn’t a Moclan officiant, Mercer is in charge of the Renewal. He performs the Kazh’gahl Commencement Rite. Following a chase, Bortus successfully tackles Klyden while cheering. When they rejoin the group, they declare that their mating bond has been revived and become holy. 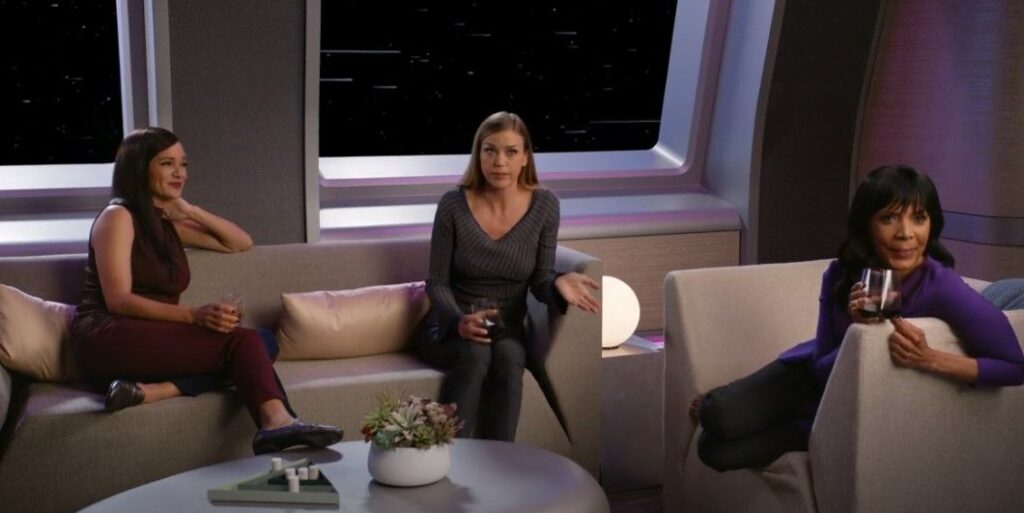 Malloy initiates a round of applause following an unnecessarily protracted embrace. Isaac keeps his gaze fixed on everything. When they return to the ship, Admiral Halsey gives them the details of their upcoming mission, which involves meeting a scientist team for delivery locations on Sargas Four, the planet where LaMarr came dangerously close to being executed in The Orville Season 1 Episode 7. Isaac queries the computer in the lab for details on historical bonding practises on Earth. Dr. Finn and Keyali are chowing down together in the mess. Isaac walks in and pops the question while kneeling. Dr. Finn questions Isaac about his motivation for proposing publicly and for wanting to get married while they are in her quarters. She queries his plans for after her passing. He replies that he will take care of Ty, Marcus, and any future offspring. Dr. Finn explains the plan over cocktails with Keyali and Grayson.

Mercer enters. When he attempts to leave politely, they call him back. He advises Dr. Finn to ask her children if they believe she should marry Isaac. Keyali picks up a transmission on a Union frequency as they get close to Sargas Four, but it’s not from the scientists. The Sargas Four barista Lysella, who assisted in saving LaMarr, sent the message. She is requesting aid. After choosing a channel, Mercer offers to collect her. She requests refuge when they pick her up. She doesn’t want to go back to her world, where decisions are made by the majority. Mercer appoints Grayson to assist Lysella in becoming acclimated to the ship and life in the Union because he sees no legal prohibition against them providing sanctuary. Visits by Isaac at Engineering. He still has not received a response from Dr. Finn.

Isaac might want to date a few people before getting married to Dr. Finn, suggests LaMarr. Ty and Finn discuss the idea with Dr. Finn. If she wants it, they’re all on board. She approaches Isaac and says yes. He responds to her comment. When Isaac sees Grayson, he asks them to have sex. He attempts to make the same request to Keyali, but she rejects him and stops him. She dismisses Isaac and orders him never to bring up this topic again before calling sickbay, but she waits until the afternoon to meet with Dr. Finn since she is preoccupied. Grayson reveals to Lysella how the Union values a good name and puts up a lot of effort to advance society. Lysella also inquires about entertainment, such as films. Asserting that they have something superior, Grayson offers to demonstrate what he means later that evening. When Grayson visits Dr. Finn, the doctor asks her to serve as her maid of honour. She learns of Isaac’s request via Grayson. Dr. Finn establishes fidelity guidelines for Isaac before going to Engineering to provide further guidelines for LaMarr. Lysella is brought by Grayson to the environmental simulator. She decides on software that recreates the Mel’Mirrys asteroid’s interior. Lysella’s mind is blown by it. Malloy is asked to be Isaac’s best man. He tells him that he is asking because Malloy is thought to be amusing. 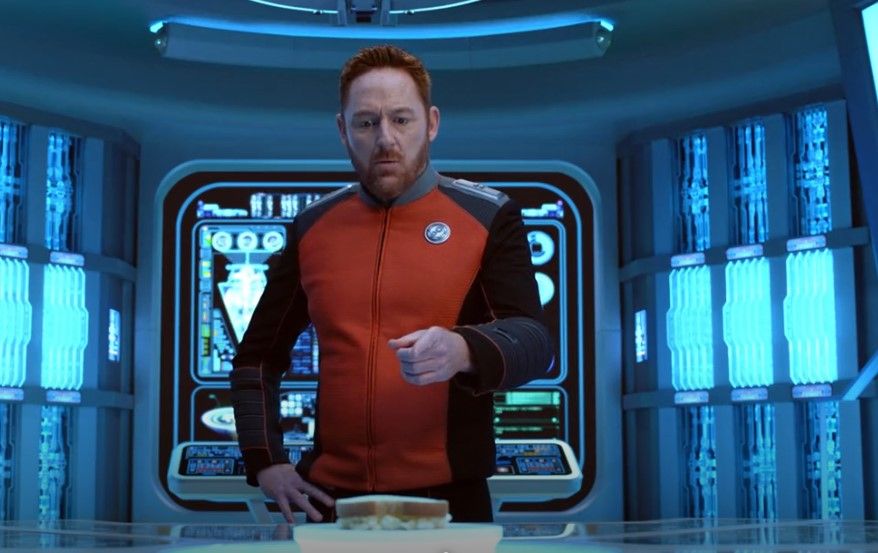 Bortus denies that he isn’t also humorous. He says he’ll serve as Isaac’s best man. This is acknowledged by Isaac, who welcomes the opportunity to participate. Isaac extends an invitation to his wedding to Kaylon Primary and all other eligible units. Lysella is shown the quantum core by Grayson. She follows up to see how Lysella is handling the information. They discuss the circumstances on Sargas Four and Lysella’s feelings towards her departure. She feels bad. Lysella accepts Grayson’s invitation to Dr. Finn’s bachelorette party and accepts his offer to assist with the planning in exchange for a job. Malloy lashes out at Mercer over Bortus replacing him as best man. He’s outraged when his egg salad sandwich from three months ago reappears. It makes him happier. Lysella, Keyali, and Grayson talk about the bachelorette. Lysella is still obsessed on bringing the technologies the Union possesses to her society. Lysella says she has to take a break from the remaining planning because she is exhausted. Malloy bemoans the lack of excitement at Isaac’s bachelor party in the simulator. 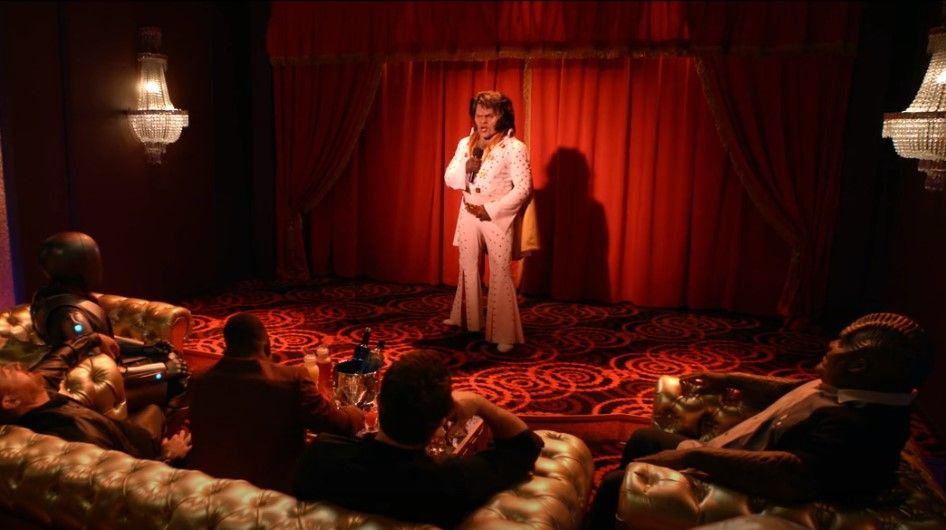 A Las Vegas lounge atmosphere has been developed by Bortus. On stage, Bortus appears dressed as Elvis. A significantly more animated dancing clip scene is set up for Dr. Finn’s party in a new simulator. Isaac is represented by a dancing simulation when the stage lights up. Lysella is briefly discussed by Grayson and Keyali before they are sidetracked by Dr. Finn dancing with Stripper Isaac. Bortus’ Elvis impersonation is lulling the guys to sleep. The only person to praise his performance was Klyden. Grayson is visited by Lysella in her workplace. She confesses to her feeling the need to return home. When Grayson enters to inform Keyali and Mercer of Lysella’s choice, Dr. Finn is trying on bridal gowns for them. They determine Lysella can return because her knowledge won’t put her planet in jeopardy. An alert sounds as she gets on the shuttle. Keyali receives a stolen comscanner from Lysella and learns that she had downloaded blueprints for a variety of technological devices.

Lysella is brought to the simulator by Grayson. She displays the stunning city of Gendel Three, which was built around 2235. She moves the programme forward by five years, and the surroundings are desolate disaster areas. Lysella is startled when a freakish being springs to life. According to Grayson, when the first Union explorers arrived at Gendel Three, they meddled with the community and exposed themselves and their technology. Gendel Three’s residents killed each other in a struggle for the technology so they could exploit it for their own gain. Bortus reports a sizable fleet of Kaylon arriving from the bridge. There are 4,000 vessels altogether. 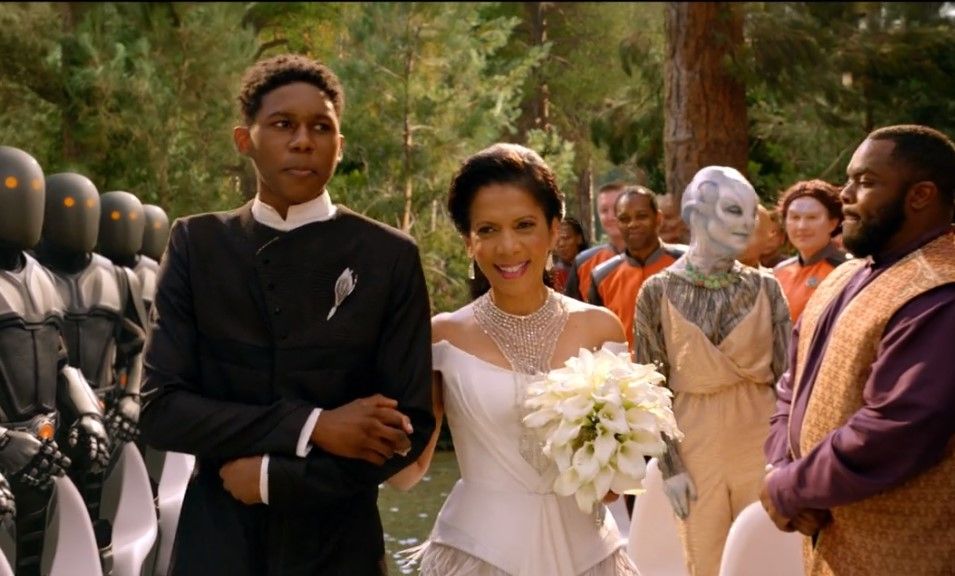 That group of people are Isaac’s wedding guests, he tells them. They can’t fit all the Kaylon inside the simulator for the wedding, Dr. Finn informs Isaac as she is called to the bridge. Isaac tells Kaylon Primary that while they won’t be able to fit everyone, the ceremony will still be broadcast to the ships. That is acceptable in Kaylon Primary’s eyes, and he congratulates Isaac. Ty carries the rings during the ceremony while Marcus leads Dr. Finn to the aisle. Kaylon visitors occupy half of the pews in the congregation. In his human form, Isaac is. The ceremony is presided over by Mercer, who allows the bride and groom to read their written vows. They say “I do” and exchange rings. 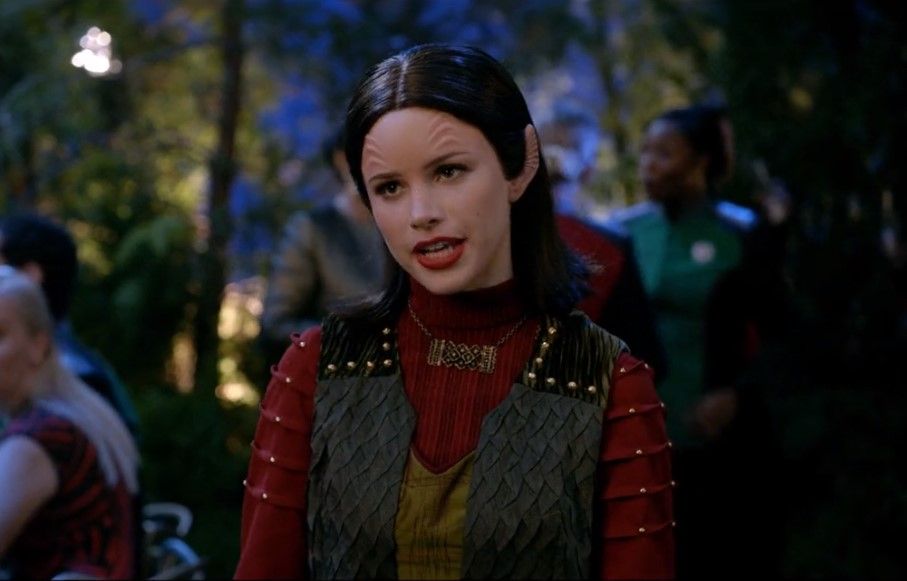 The congregation cheers when Mercer pronounces them man and wife, the organics joyfully, and the Kaylon uniformly and graciously. Lysella congratulates Dr. Finn at the reception. Lysella’s decision to remain on the ship has pleased Dr. Finn, she informs the woman. Isaac proposes to make her acquaintance with the Kaylon. Grayson is joined by Mercer, who observes how the Kaylon are interacting with the crew despite only recently having been at war. The transport has landed, and a female visitor is making her way to the reception, the bridge notifies Mercer. Alara Kitan enters. Dr. Finn and everyone else welcome her. Just as Bortus taps his glass to get their attention, she catches up with them. He commands attention because his tapping on the glass doesn’t draw it. When Isaac notices that Malloy’s toast isn’t going well, he interrupts to ask him to talk. Malloy toasts the couple with a charming and heartfelt remark. He agrees to play a song after that at Dr. Finn’s request. “Secret O’Life” by James Taylor is being played.