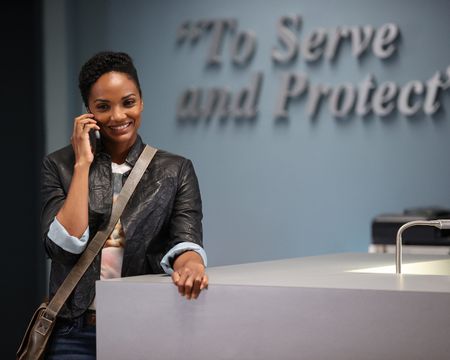 In the previous episode of The Rookie Season 4, The police were only able to set a trap for Ivey and her group thanks to Thorsen’s warning. As a result, the well-known Claire Ivey was dethroned by a rookie. Meanwhile, Nolan was chasing the firefighter who had agreed to be his date to Lopez’s wedding, and things were going well so far. Bailey agreed to try dating. Prepare for Episode 3 of The Rookie Season 4 after some new stuff in tonight’s huge episode. The episode is titled “In the Line of Fire” and we anticipate seeing some surprising and risky situations. Nolan and Officer Lucy Chen can catch someone. While the other has a shocking connection to one from a police background. We know that they will face many challenges, and overcoming them all will not be easy. Watch The Rookie S4E3 Promo and exclusive photos at www.tvacute.com, So that you can prepare yourself for the upcoming new episode.

The Rookie Episode 403 Synopsis: Officer Nolan and officer Chen report to a structure fire and suspect that there is more to the situation than meets the eye. Meanwhile, after witnessing a sniper shooting, the team searches for the shooter and discovers that the perpetrator has a connection to one of their own.

Guest-starring is Jay McLaren as Elijah, Jenna Dewan as Bailey Nune, and Tru Valentino as Aaron Thorsen.  “In the Line of Fire” was written by Robert Bella and directed by Dan Willis.

The Rookie Season 4 Episode 2 will air SUNDAY, October 10 at 10 pm ET, on ABC. Episodes can also be viewed the next day on demand and on Hulu. Hard die fans of ‘The Rookie’ can stream the entire season 3:   DirecTV | Sling TV | Fubo TV

Nolan begins the episode by attempting to assist Chen in choosing a paint color for Jackson’s old room. Tamara is upset with the situation because he has turned his room into hers. Despite being a sharp thinker, Chen finds this decision difficult. Nolan brings it up and claims it has something to do with her sadness. Nolan is carrying training books in his luggage since he wants to become a Training Officer in a year. Bradford was promoted to the rank of Sargeant. Bradford takes charge of his first roll call as a result of his promotion. Grey meets Harper’s new rookie, who turns out to be the infamous Aaron Thorson. Aaron Thorsen, who was jailed in Paris for the murder of his roommate, sued the LAPD to gain access to the division. Bradford and Grey don’t want the rumor mill to turn against Thorsen because he was found not guilty.

Claire Ivy, played by Tricia Helfer, was driving across the city in her sports automobile when Nolan and Chen pulled her over. She attempts to avoid having to show Nolan her driver’s license and registration. It’s found that she’s been linked to 40 high-end robberies but hasn’t been arrested in any of them. Harper and Thorsen talk about what happens if someone recognizes them and refuses to deal with them on their first call together. After that, they discover blood, a gas leak, and finally, a body. When Thorson sees the body, he starts panicking out. The victim was a famous stylist who died as a result of a brain injury caused by blunt force trauma. However, according to Harper, the gas leak was caused by the killer in order to ensure the victim’s death. While the firefighters arrive at the crime scene, Nolan runs into Bailey; the reunion is lovely and awkward, and Nolan considers asking her out again with Chen’s suggestion. Thorsen discovers the body as a trigger, and Harper informs him that this is not therapy. Wesley tries to put Jack to sleep as Lopez watches a documentary. The documentary turns out to be about the case against Thorsen, and Lopez jokes that if she departs, they’ll let French killers into the force. In front of the crime site, Nolan makes an attempt to ask Bailey out.

Despite his stuttering, Bailey decides to go on a date with him tonight. Claire Ivy’s plans to perform one of her largest heists yet are discussed during the team’s debriefing over the busiest weekend in Los Angeles. The team invites Harper to join them in a stakeout on Claire, but she urges Thorson to remain back since she believes he isn’t ready. Nolan and Chen are teased by Claire about the theft possibly taking place the next day. Thorsen is getting some tough love from Harper, who insists that he isn’t cut out to be a cop. Chen acknowledges that it’s difficult for her to change the room where Jackson used to dwell. She admits that she feels like she’s forgetting about him, and Tamara agrees. They don’t want to forget about him. Instead of going on their intended date, Nolan and Bailey decide to attend the stakeout. Nolan and Bailey, of course, run into Claire, who has done her homework on Nolan.

The stakeout on Claire is ended, but Nolan laughs that that doesn’t mean the date is over. In a flirtatious kiss, the two embrace! Thorsen defends himself against Harper, stating that he will go throughout California until he is given a chance. Harper is compelled by his speech, joking that she must ensure that he is well-trained before assigning him to a less important area. Despite having a fantastic night together, Bailey dumps Nolan through text; Chen sympathizes with him. Claire is definitely robbing something that night, they agree. Claire Ivy rides away on a black motorcycle from Nolan and Chen’s perspective, leading the team on a chase. Bradford traces her down to the location where she took off, only to discover an escape tunnel beneath a city bus. Thorsen is concerned that there is another dead corpse inside, so Harper and Thorsen go to another call. Claire discovers that this is all a diversion. Claire fires a shotgun at Nolan while fleeing, forcing Nolan to fire a shotgun at her. Claire eventually gives up, drops her gun, and lets Nolan arrest her after they talk. Grey and Bradford talk about Bradford’s behavior in the circumstance. Harper and Thorsen, meantime, had a heart-to-heart. She makes the decision to give him a chance.

Chen and Bradford share a laugh and compliment Chen on her and Nolan’s performance today. Tamara demonstrates her paint job in Jackson’s room after Chen returns home. Nolan confronts Bailey about her break-up text; she explains that it’s really about her and her experiences, not about him. Despite everything, he attempts to figure out why he keeps stating that he’s proof that people can change. The two decide to give it another shot, kissing once more.