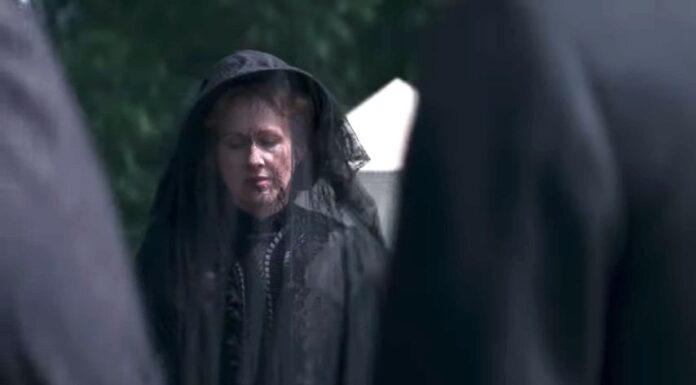 The Gilded Age took a dark turn, concluding its third episode with a bang. We saw in episode 3 George attempt a massive gambit. he found himself in a very fortunate position after being poorly underestimated by the city alderman, who spent much of the hour plotting to harm him. Once their defeat was certain, the aldermen attempted to broker a new deal, but it was too late. Patrick Morris (Michel Gill) debasing himself by imploring George for forgiveness failed to sway the shrewd businessman.  Are you ready for the fourth episode of The Gilded Age season 1?  To know more about the new episode 4 of The Gilded Age take a look at its promo and Synopsis below on tvacute.com.

This is going to be a very dramatic episode called “A Long Ladder”. Why?  there Patrick Morris’ death.  In the new episode, Bertha’s reaction to the news of Mr. Morris’ death will be far less emotional than you might imagine.  Patrick ended up killing himself in episode 3. He looks at photos of his family and shoots himself in the head. Fans think George would like to help Patrick Morris and make him feel better, but he can’t. A lot of his family’s money is at stake, as well as this question of honor. People in the alderman’s office have worked together to try to take away everything he’s ever built.

The Gilded Age Episode 104 Synopsis: In the aftermath of a tragedy, George agrees to help Bertha; a visit has a lasting impact on the staff of Russell house.

The Gilded Age Season 1 Episode 4 on HBO on February 14, 2022, at 9/8c. You may see the first episode on HBO Max if you missed it. The second episode will air on Sky Atlantic in the United Kingdom on Tuesday, February 15. You’ll be able to catch up on NOW as well.

Some viewers are already wondering whether the show will be renewed for a second season. Season two is already being planned by the authors. The Gilded Age has yet to be formally renewed by HBO, but that doesn’t mean the show’s creators aren’t already planning what comes next for these characters. “The truth is, we’re always getting the second season ready long before we know whether it goes ahead or not,” executive producer Gareth Neame told Radio Times.