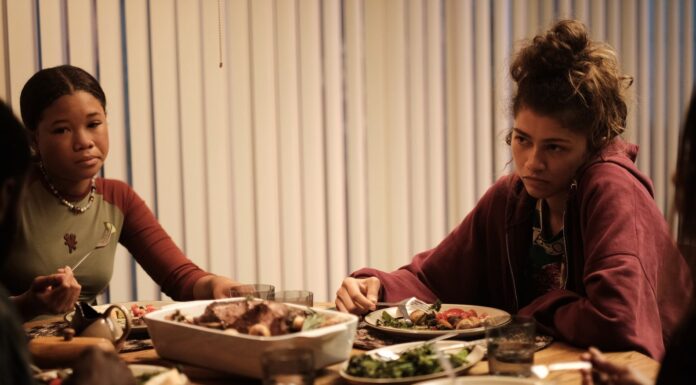 Rue had relapsed after Jules abandoned her at the train station in the Euphoria Season 1 finale, telling her addict friend Ali (Colman Domingo) over Christmas Eve dinner that she didn’t know if she wanted to be clean… or if she even wanted to be alive. ‘Rue and Jules cross paths for the first time since Christmas as East Highland celebrates in the new year,’ according to the season premiere. While she appeared to be in a better mood by the time Ali drove her home, she became teary-eyed when she saw Jules at the end of the second special episode. The love affair between Cassie Howard (Sydney Sweeney) and Nate Jacobs (Jacob Elordi) was revealed, but how did vindictive Maddy Perez (Alexa Demie) react? Here’s a rundown of what happened in A Thousand Little Trees of Blood, the sixth episode.

Rue opens the episode by staring carefully at a Jolly Rancher and slowly reaching out to touch it, her hands quivering. When her mother Leslie (Nika King) walks in, she keeps breathing heavily as she unwraps it, but Rue doesn’t notice. Leslie pours a glass of water for Rue and hands it to her, telling her that she needs to drink it, but she pushes her away. Leslie joins Rue at the table and asks if she needs assistance as she drops the candy and sobs on the table. Leslie drags Rue to her bed, saying over and over that the best thing about hospitals is that they will treat you even if you’re a bad person. She also reveals that her mother grew up in the church and that she located a treatment center that might have a bed for her next week. As Gia (Storm Reid) tries to console her sister while holding back tears, Rue says in voice-over, ‘I don’t remember everything I said to my mom.’

Taking into account a painful experience Gia was the one who discovered Rue comatose after an overdose, and she attempted to stay positive whenever Rue stated she was well, but the events of the previous episode have made it difficult for Gia to trust her elder sister. Rue also decided to call her mentor and former addict Ali (Colman Domingo) to apologize for retaliating against him when he was only trying to protect her. Ali assured a tearful Rue that he had forgiven her and insisted on cooking for her and her family. Ali inquired about Gia’s feelings while they were preparing supper in the kitchen, as all of the attention had been focused on Rue for, well, the longest time. Gia maintained she was well, but when Ali stated Rue was ‘getting better.’

Nate went to great efforts to reclaim the tape. Nate thought it was time to make apologies now that he was no longer under his father’s influence, and he began with Jules. Now that everyone knows Nate’s ex-girlfriend Maddy had the footage of Nate’s father Cal (Eric Dane) having sex with Jules. Maddy returned home from work and went straight to her bedroom, where she was startled to see Nate standing there with a revolver. Nate began circling her room and voiced his regret for seeing Cassie behind her back, attempting to keep his calm but internally afraid of what his next action would be. Maddy began to believe him for a split second, but when Nate requested her to hand up the tape, she was hurt and refused to tell where it was, prompting Nate to point the gun at his head. Maddy screamed that the disc was in her bag as she cried on the bed, and Nate scooped up the bag, took what he came for, and went without saying anything. Nate makes an attempt to make amends with Jules. Later, Nate drove to Jules’ house and requested that she meet him in his car, which she accepted. He apologized for the manner he acted and handed her the recording of her and Cal, and despite Jules’s skepticism, Nate swore there was no catch to his surprising act. Since season one, this was the first decent-ish thing Nate has done.

Kat and Ethan’s marriage is in jeopardy. Kat’s concerns resurfaced in episode two and she convinced herself that Ethan wasn’t the right guy for her after all. Her terrible self-doubt caused her to have hallucinations of multiple models asking her to ‘love’ herself. But there are some things you can’t get rid of. Kat invited Ethan out to lunch in an attempt to break up with him, but when he realized she was beating about the bush, he became irritated, resulting in a fight. Kat was adamant about not sharing her feelings with Ethan, but a heartbroken Ethan caught the hint and walked away from the table.

Cassie had reached her limit. She hits a critical juncture in her life. Maddie and Cassie did not face off in this episode after that revelation. Cassie has been in tears because Maddy has refused to speak to her for obvious reasons, and her sister Lexi (Maude Apatow) and mother Suze are fed up with her playing the victim card. Suze was worried that Cassie would hurt herself, so she urged Lexi to get rid of all the blades in the kitchen. Cassie’s sympathy tears quickly turned to fury as she realized what she had done wrong. Suze and Lexi were both annoyed by her sudden change of behavior and agreed that she needed to wake up and accept responsibility. ‘They weren’t boyfriend and girlfriend,’ Cassie yelled again and over, but when she saw she wasn’t getting the sympathy she needed from her family, she packed her belongings and walked over to the only person Nate.