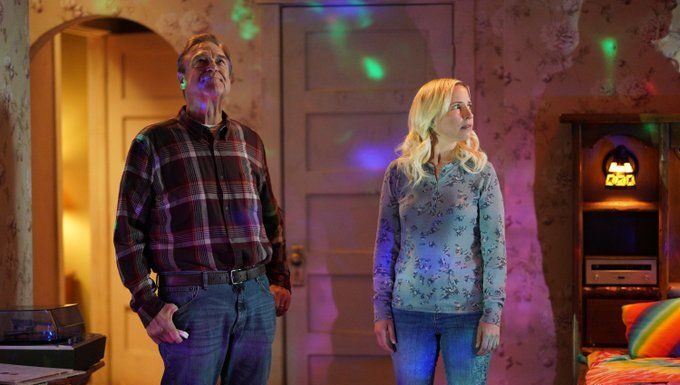 In the previous episode 8 of The Conners Season 4.  All are getting ready for Christmas, and Beverly Rose has damaged several decorations, so Dan makes Christmas ornaments out of fishing lures. That is until Jackie brings up a Christmas tree made out of beer cans that she purchased from a distributor at the Lunch Box. Continue reading about episode 8 by scrolling down the page. Fans are now keen to learn more about The Conners’  new episode details.  “The Conners.” You can see www.tvacute.com’s synopsis, exclusive photos, and promo for The Conners Season 4 Show 9 titled “Three Exes, Role Playing and a Waterbed” below, which will help you better understand the episode.

In the ninth episode,  Louise is settling into the Conners’ home, and Dan is considering selling the furniture set that he purchased for Roseanne when they were first married.

We're feeling 🌻 groovy 🌻 this week! See you tomorrow for an all new episode of #TheConners! pic.twitter.com/yTUywRdkyT

The Conners Episode 409 Synopsis:  As Louise starts to move into the Conner’s home, Dan decides to sell the furniture set he bought for Roseanne when they were first married. However, he soon finds parting with the furniture – and old memories – harder than he thought it would be.

The Conners Season 4 Episode 9 will release to ABC on January 5, 2022, airing at 9 p.m. in the network’s Wednesday time slot. The season will begin with a live episode, with the subsequent episodes being taped again. The most recent episodes of The Conners will be accessible the next day on ABC.com or Hulu. live TV streaming services such as Fubo TV, Hulu with Live TV, and YouTube TV. ‘The Conners’ is available on iTunes, Amazon Prime Video, Google Play, or Vudu.

The Conners are getting ready for Christmas, and Beverly Rose has damaged several decorations, so Dan makes Christmas ornaments out of fishing lures. That is, until Jackie brings up a Christmas tree made out of beer cans that she purchased from a distributor at the Lunch Box. Nick, the proprietor of the bookstore, and Darlene have been dating for two weeks and are having a great time. He invites the family over for brunch, and they discover that Nick does not have a cell phone. It drains his vitality and prevents him from being present, he claims.

Jackie sows doubt in Darlene’s mind, leading her to believe that Nick is concealing something by not having a phone. Darlene gets Nick a phone, but he questions why she bought him a gift since he explicitly stated that he didn’t want one. Darlene is challenged to go an entire day without using her phone. Darlene realizes at home that she is concerned about Nick cheating since she cheated on Ben, and if she can do it, so can anyone. Nick understands and even decides to keep the new phone after she explains it to him.

Isabella, a young woman who dropped out of high school to have a kid, is mentored by Becky. Becky offers to watch the baby so Isabella may study in the library, but Isabella instead attends a concert. Becky believes she has been duped. Then Jackie reminds her that she’s trying to make amends for her mistakes by assisting these girls, and Isabella’s failings aren’t her fault.

Harris returns home to fetch some dinner. She tells Becky that she doesn’t live with her partner and instead sleeps on someone’s couch. She is adamant that Becky not inform Darlene. When Louise requests new bedroom furniture, Dan attempts to sell his old set at a yard sale. He’s seeking $2,000 for a 40-year-old bedroom set and is angry when just $100 is given. Dan realizes that it’s not the bedroom set that’s bothering him, but what it signifies to him. When they first got married, Roseanne spotted that set in a catalog and fell in love with it. To fund the set, Dan worked two jobs and put it on layaway. Finally, he chooses to burn it in order to commemorate what it meant to him and go on.