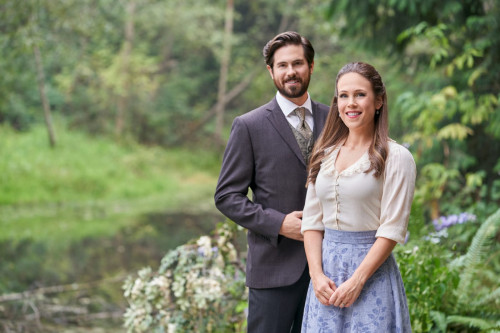 Mark your calendars, Season 9 of When Calls the Heart has a premiere date. On Sunday, March 6, at 9/8c, Hallmark Channel’s hit, longest-running original series returns with 12 new episodes loaded with more romance and drama for the inhabitants of Hope Valley. That includes seeing Elizabeth (Erin Krakow) and Lucas (Chris McNally) together following her Season 8 finale decision; what does their relationship look like beyond courtship?

The actress Erin Krakow discussed to tvinsider filming the romantic scene in which Elizabeth kissed her man! “Hope Valley is in a state of growth, with the progress of the foundry and the evolution of vital relationships,” says Season 9’s synopsis. With a few citizens of the town running against one another in the Mayoral contest, the town is buzzing.”

“When Calls the Heart is a beloved series that continues to climb in the ratings year after year,” Lisa Hamilton Daly, Executive Vice President, Programming, Crown Media Family Networks, said in a statement. It continues to grow in popularity and has become a cornerstone of our network’s storytelling. We’re ecstatic to present a new season from the outstanding writers and incredible performers. We are excited for people to tune in to the new season, which will continue with fresh storylines of romance, conflict, and friendship.”

According to Live+3 ratings, the drama’s Season 8 finale was the most-watched episode of the series in households (2.9 million) and total viewers (3.6 million). In terms of household viewing, the eighth season was also the most popular of the series. In 2021-to-date, When Calls the Heart was the #1 original scripted series on ad-supported cable among households and women 18+, as well as the #1 original series (including reality) on ad-supported cable among women 18+.

When Calls the Heart Season 9 airs Sunday, March 6 at 9/8c on Hallmark Channel.