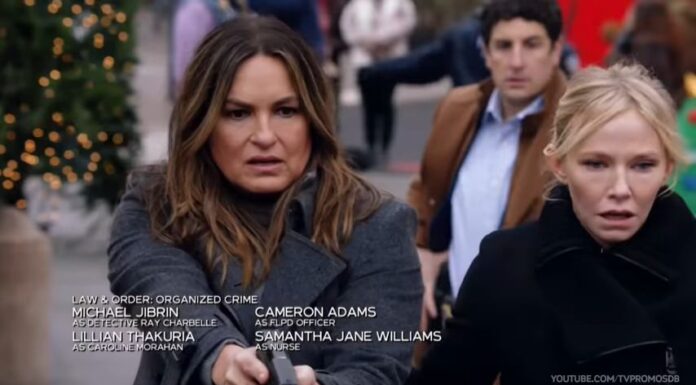 In Law and Order SVU Season 23 Episode 9, The guy who ordered Kathy Stabler’s murder is finally on trial, and Law & Order: SVU/OC crossover chronicles both his trial and the conviction. But first, we have a graveyard date, some courtroom outbursts, and the reappearance of one Rafael Barba. (Recap Below) After watching the fall finale episode, fans are eagerly anticipating new episodes. But when will we be able to see the tenth and episode? You’ll discover everything you need to know right here. From www.tvacute.com, a summary and promo for Law and Order SVU Season 23 Show 10 can help you better understand the episode.

Donal Logue, who appeared on the long-running criminal thriller as Declan Murphy in 2014 and 2015, is back as a captain in the Hate Crimes Division of the NYPD. He enlists the services of the SVU team to investigate a wave of hate crimes sweeping through NYC on Christmas Eve, which includes guest star Jason Biggs as Det. Andy Parlato-Goldstein. Declan also gets a chance to reconcile with Amanda Rollins (Kelly Giddish), the mother of his first kid.

Law and Order SVU Episode 23.10 Synopsis:  The SVU is called in to help investigate a wave of hate crimes on Christmas Eve; Rollins catches up with an old flame.

Law and Order SVU Season 23 Episode 10 will release in 2022 on Thursday, January 6 at 9 p.m. on NBC. Subscribers to services like Peacock, Fubo, Sling, or YouTube TV will be able to watch the new episode on Thursday night as well. fans with a Hulu account will be able to watch the season 23 debut for free the next day. Fans who have access to Amazon Prime, Apple TV, or Google Play will be charged for each episode they view.

The first half of the crossover begins at Kathy’s gravesite, where the Stablers and Olivia have gathered to wish Elliot’s deceased wife a belated happy birthday. They lay flowers and say a few words. They then discussed Richard Wheatley’s future trial. Although ADA Carisi and Bureau Chief Phillip Baptiste urged the judge to summon Isaac Becker, they knew he had been murdered by Wheatley. But the justice sided with Wheatley to silence the man. Wheatley sacked his lawyer in court to buy time. The offender chose Counselor Rafael Barba after interviewing numerous. Barba represented the man, Stabler and Benson said. The defence lawyer stated he took the case because the authorities were unfairly charging him with murder rather than RICO. They allege the NYPD is framing Wheatley for Kathleen Stabler’s murder. Then Barba tried to cast Elliot Stabler as a vigilante for interfering with the probe. Barba tried to show Stabler’s excessive use of force when Sgt. Bell testified. It’s ironic that her family is suing the NYPD for excessive force against her nephew. But someone complained. Wheatley demanded a private chat with Benson and apologized for her automobile accident, blaming him. He told her to keep Stabler’s kids out of court when his ex-wife, Angela Wheatley, testified. He also advised her to stay away. In response, Stabler shut down. It was after she was hurt and mentioned the letter that she changed the subject. He still had no answers. Angela Wheatley testified about her recovery from nerve agent poisoning. She used a cane and had trouble speaking and remembering. Ahead of time, Carisi brought up Richard’s notion that Stabler had killed her son. But Richard killed him.

But the jury was told to ignore it because Richard wasn’t convicted. Barba instantly brought up Elliot and Angela kissing. They made her look like the mastermind who ordered the hit on Kathleen. She confessed her love for Elliot Stabler under oath. His kids were in court and heard the truth. Richard was enraged that Barba made him look weak, but he had to accept it. Richie, his imprisoned son, was beside him. He was in jail, video conferencing his father. However, someone off-camera said something to the man that forced him retract his statement. He said he lied to his father under oath. It harmed the prosecutor’s case! It’s up to Stabler now. Barba understood how to become angry. He was found in contempt of court for insulting the judge after being repeatedly told to merely answer the question. It was a ruse to convince the guard to accompany him to Wheatley’s alone. Stabler managed to ruffle Wheatley’s feathers by mentioning his women.

Wheatley wanted to testify, but the defense wanted him to rest. Benson suddenly reappeared with Angela. On his dying, Stabler blamed Richard for his wife’s murder, Richard said. He denied any involvement with the crime and blamed it on Isaac Becker, claiming he had fled the country. Carisi pressed the ruthless drug king for hits. “If I wanted someone dead, they would be dead, even you Mr. Carisi!” Wheatley yelled. he had threatened a prosecutor in open court… Stabler had an emergency while the jury deliberated because Eli had escaped. An impasse on the jury led to a mistrial. The court declared a mistrial and remanded Wheatley. Stabler had to fly to Eli. When he went home, he looked for Eli and called him…

So, let’s start with the bad news, shall we? There will be no SVU next week, and no SVU for the rest of the year. The plan was to end big with the crossover and return with more in the new year. Hargitay and the rest of the cast will return next year. There are no official details, but we expect SVU to return to its non-crossover format. Do we still expect Benson and Stabler to cross paths in the future? Sure, but not every episode. That would lessen the specialness of the crossovers.  Hopefully, a succession of new episodes will show throughout the month of January; after all, there will most certainly be a pause in February owing to the Olympics.