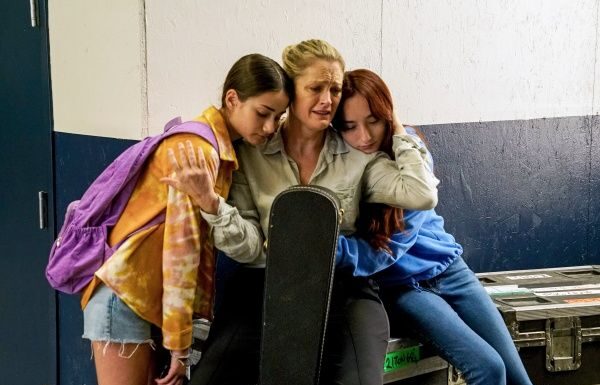 We can already predict that this tale will take a turn for the worst. through this episode, we have an opportunity to delve further into Gabby’s past and learn more about who she is. This episode will undoubtedly contain some humorous moments, but it will also provide the creators of this show-within-a-show with significant hurdles.

The Big Leap Episode 5 Synopsis: When a trip back to Gabby and Justin’s high school leads to a big emotional reveal, both Gabby and the producers are left wondering how to best move forward. Meanwhile, Nick tries his best to stage a very important conversation between Mike and Paula — against their will. Then, Reggie works to figure out how to cope with new development in his relationship, and Julia struggles to relate to her daughters, while they cope with the changes in their family.
Cast: Scott Foley as Nick Blackburn; Simone Recasner as Gabby; Teri Polo as Julia; Ser’Darius Blain as Reggie Sadler; Piper Perabo as Paula; Ray Cham as Justin; Kevin Daniels as Wayne; Mallory Jansen as Monica; Jon Rudnitsky as Mike; Anna Grace Barlow as Brittney Lovewell

The Big Leap Episode 5 titled “We Were Just Babies” will release on October 18, 2021, at 9:00-10:00 PM ET/PT On Fox. It will also be released on the official site of CW Network. Another option is Available; DirecTV, Fubo TV, and YouTube TV. VOD platforms like Apple TV, iTunes.

In a flashback, Wayne is in a gay nightclub, making eye contact with Neil, a go-go dancer whom he brings home with him. He informs his agent that he intends to develop a show. He invents the Big Leap and celebrates by releasing a new line of medications. Gabby is in the doctor’s office for a checkup. The receptionists are fangirling over Gabby as they watch the newly released teaser for the show. Monica continues to dance while on steroids and painkillers. Henry, Nick’s daughter, is in town and will be staying with him for a time. Brittney is outraged when Gabby is approved on a celebrity dating app. Mike informs Paula about the date, and she accepts it. Neil, Wayne’s ex-husband, arrives. Wayne takes Neil out to dinner and now demands 15 percent ownership of the programme because he came up with the name. Reggie is concerned about Gabby’s date with a baseball player. Paige becomes enraged with Mike and insults him during dinner, but Paula defends him. Monica and Justin having a good time dancing together, until Monica’s knee gives out and she falls. Simon and Justin have a conversation and make up.

Mike thinks he may not want to rekindle his relationship with Paige, and he and Paula share a kiss before heading to her place for sex. Julia approaches Raven at work, wanting to learn more about her husband’s whereabouts, and the two have a breakthrough in their relationship. Wayne receives an apology from Neil. Reggie is talking with Gabby at home. He claims he came out to protect her from Aaron. When Sam wakes up, they all sit down to watch TV together. Julia tells Raven why she stopped dancing since she lost both of her dearest friends to AIDS in the 1980s. Nick and Henri drive Monica to the hospital, and then he has to deal with Wayne’s phone call. Mike is on cloud nine the morning after his night with Paula, and he’s dancing in the streets. She discovers his wallet and discovers that he worked at the same factory where she had fired him. Nick discusses her desires with Henry. and she expresses her desire to visit England. Gabby’s mother expresses her dislike for Reggie, but Gabby assures her that Reggie is a kind guy.