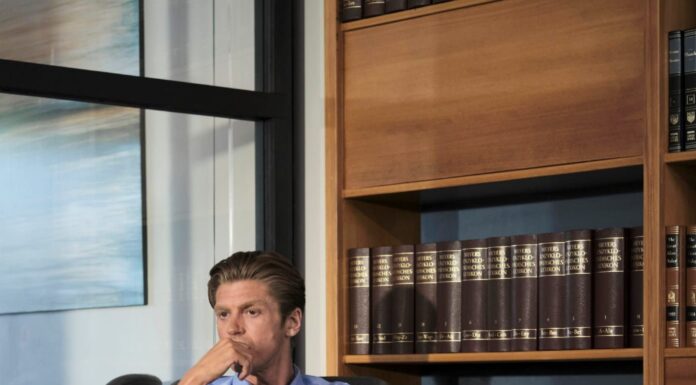 The Penultimate episode of Chesapeake Shores Season 5, finished with a pregnant Sarah collapsing on her office floor. Thankfully, Mick (Treat Williams) survived the plane disaster. But his near-death experience made him consider his future with Megan (Barbara Niven). Meanwhile, Evan is also realising that his feelings for Abby (Meghan Ory) are more than just professional. To discover more about Chesapeake Shores episode 509, read the recap with www.tvacute.com below, which will help you understand the episode better. What can we expect from the next episode? Chesapeake Shores S05 is near the ending, and Fans have a dozen of questions. Will Abby select Jay or Evan or stay single? Are Mick and Megan reuniting? Will Sarah and Kevin’s baby die? We’ll have to move on in order to see this. The tenth episode titled, “That Old Feeling” promises to be more interesting. Here you’ll find a trailer for Chesapeake Shores Season 5 Episode 10 as well as a summary.

Who will Abby choose? Evan and Jay…

On Chesapeake Shores, Abby (Meghan Ory) must make some tough choices. Evan Kincaid (Robert Buckley), a quirky billionaire, decides to ask her out. In fact, Evan isn’t the only one. Jay (Greyston Holt) has decided to share his feelings as well. Is he, however, more of a friend to her than a romantic partner? And Abby may have decided. In the teaser, she leaves a voicemail for someone, expressing her concern. “Maybe we should try it?” she asks. That she calls on? It’s unlikely that all the storylines will be neatly wrapped up in the season finale. Then, when can we expect Season 6 on Hallmark Channel? it will be revealed in the Chesapeake Shores Season 5 finale. A sneak peeks at what to expect in the next episode includes big news from Mick and Megan, who were planning a round-the-world journey together at the close of the last episode. In addition, the clip previews appear to be a passionate moment between Connor and Margaret, while Kevin comforts Sarah. check it below.

Chesapeake Shores Episode 5.10 Synopsis: – Evan (Buckley) makes a meaningful gesture to ask Abby (Ory) out on a date. As Abby considers Evan’s question, Jay (Greyston Holt) also opens up about his feelings. Mick (Williams) and Megan (Niven) announce plans to take some time off to travel the world together, but do not get the reaction they were expecting from the family. Complicating matters, Megan receives a tempting career opportunity that would take her to California. Jess faces the consequences of an emotional email she sent in the middle of the night, while David (Carlo Marks) discovers what his father’s frantically out-of-character phone call to him really meant. As Kevin (Penny) struggles with how to help Sarah (Jessica Sipos), he opens up to his parents against her wishes. Worried about Connor’s (Francis) health as he prepares his case to clear Luke (Stephen Huszar), Margaret (Raylene Harewood) tries an unconventional approach to get him to relax.

The show left wondering what happened to Mick (Treat Williams) at the close of the previous episode, and Chesapeake Shores doesn’t waste any time in revealing his fate. Mick’s plane had a mechanical failure and he attempted to land on one of the nearby islands. On Chesapeake Shores Season 5 Episode 9,  He is discovered by the coast guard. He’s lucky to be alive. The family, of course, is staying together. In the O’Brien household, it’s a caffeine-fueled night. Megan wishes she could have told Mick she adored him. He doesn’t, however, appear to be Mick. She becomes enraged and rushes away. Connor requires assistance. Nell is Connor’s personal assistant. Instead of bringing in new prospects for Connor, she’s attempting to mediate calls. Evan pays Mick a visit. Evan is lingering, and Mick understands that all he wants to do is hang around. They make the decision to have lunch.

Luke’s having problems once more. His drug test revealed that he had taken amphetamines. Luke is taken aback. Bree seeks legal assistance from Connor after Luke took antihistamines. Evan takes Mick to see his jet and is taken aback by how badly it has been damaged. Evan offers to purchase him a plane. Evan makes an attempt to make amends with Mick, but he fails miserably. Megan is putting the finishing touches on the show. Kevin is pleased with her accomplishments. Margaret will be collaborating with Connor. She resigned shortly after he did. Mandrake tells Evan that something about Chesapeake Shores has skewed his judgement. Evan isn’t convinced.

Luke’s hearing is in three hours for Connor and Margaret. Sarah’s appetites are exposing her to a variety of new experiences. Kevin converses with the infant and considers names that Sarah dislikes. Decklin? At the courthouse, Connor is having a panic attack. They dial 9-1-1 for help. Connor is now in good health. He’s well now that the doctor has given him some juice. Bree is still apprehensive. Margaret, on the other hand, bought them a week until their next hearing. Evan and Mick are starting to get to know one another. Evan approaches Mick with the idea of asking Abby out. He’s been missing her. Margaret and Connor went to yoga, then went to see an art exhibit. Nell has a lovely appearance. Arthur was never a fan of all the additional activities that come with being a famous artist. He did it just for Elaine’s sake. David is taken aback when his father declares his love for him. David feels apprehensive because he has never mentioned it before. Mick wants to spend some time with Megan travelling across the world. She concurs. Kevin and Sarah are getting ready to go for the art show at the end of the episode when Sarah collapses. She is found unconscious on the ground at the end of the episode.