Station 19 Season 5 Episode 8 – Who dies in Winter Finale? A dangerous circumstance before the show ends. 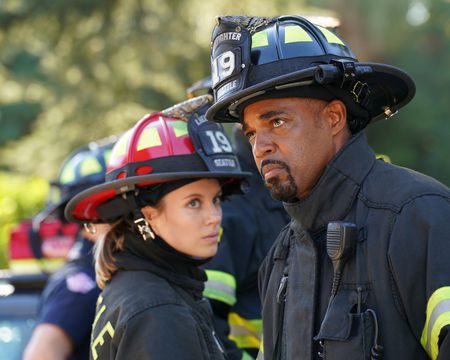 In the previous episode of Station 19, Carina DeLuca (Stefania Spampinato) and Maya Bishop (Danielle Savre) discuss having a baby. Carina will give birth to the child and use her egg.  Miranda Bailey (Chandra Wilson) and Ben Warren (Jason George) make important decisions that will affect their lives forever. Pruitt Arike Miller (Janai Kaylani) has been looking for a new home after Dean Miller (Okieriete Onaodowan) left Station 19 in episode 5. Ben pledged to raise Pru if anything happened to Dean in Season 4 following a near-death experience. Dean’s parents are now vying for custody of the young daughter, and Miranda is caught in the midst. So, here’s Everything we know about Station 19 season 5 new episode 8 so far, including the release date and promo which can be found at www.tvacute.com. Lachlan Buchanan reprises his role as Emmett. With Jack and Vic in the AID car, Emmett Dixon makes his appearance on Station 19.

Station 19 season 5 episode 8 titled “All I Want For Christmas Is You” will air tonight, and while it is set during the Christmas season. There’s going to be a lot of commotion in this upcoming episode, and Vic and Jack could be at the center of a lot of it. What happened between them would have far-reaching consequences, not just for Vic’s relationship but for the entire firehouse. There will be a dangerous circumstance before the show ends, and it could be one that puts another character in jeopardy. the winter finale will almost certainly end on a cliffhanger. Check out the promo below if you want to get a better sense of the danger that is coming ahead! The Station 19 Season 5 Episode 8 winter finale’s opening scene appears to be a cheerful festive scene. Carina and Maya are flirting in the kitchen, while Andy is smiling somewhere else. When firefighters are dispatched to an emergency, however, In the trailer, Warren explains, “If we move that car even one inch, he would die on the spot.” “I’m not going to allow a man pass just a week before Christmas.” Vic appears to be suffering a nervous breakdown in the final seconds, as we hear the sound of someone collapsing. The ABC news release’s summary doesn’t provide fans any additional information about who dies. The miracle appears to be saving the person crushed between two cars.

Station 19 Episode 508 Synopsis: It’s the holiday season and the firefighters have their hands full responding to a number of crises throughout Seattle; putting aside their differences and personal drama, they come together to try and achieve a Christmas miracle.

‘Station 19′ Season 5 Episode 8 will release on December 16, 2021, at (8:00-9:00 p.m. EDT) on ABC. The episodes are 42-43 minutes long each.  Subscribers to Hulu can watch the show online or live to stream it on Hulu+Live TV. the show is available on Fubo TV, DirecTV, YouTube TV, and Xfinity, among other platforms. You can also buy or rent episodes on Vudu, iTunes, Amazon Prime Video, Google Play, and Microsoft Store.

Both Jack and Vic are having trouble sleeping. Andy is still irritated that the boys are sexually assaulting and hazing Duval at the age of 23. Andy is surprised when Sullivan comes in at 23. Gibson hasn’t worked since Thanksgiving, and on Vic’s day off, Travis instructs her to call Gibson for assistance with a towel rack. Carina prepares a lavish meal for Maya. She wants all the sex and joy to celebrate the birth of their child. Miller’s parents arrive at the boathouse and inform Jack that he must go because they own the property. Miranda and Ben’s lawyer informs them that there will be a custody battle, and Pru will spend the summer with Dean’s grandparents and other Grandparents. Miranda is adamant about not fighting if it means harming Pru.

Jack arrives to inform Vic of the situation and assist her with the tiling and towel rack. Travis comes in to meet his mother, who is collecting her belongings to go. Vic expresses her rage by smashing the rest of the tile and talking about Dean, and Jack follows suit. On their way to a call, Sullivan and Theo discuss how they shouldn’t be with other firemen. When they reach on the scene, the fire has grown in size. Ben and Miranda had a disagreement about whether or not to fight for Pru. When Ben and Miranda visit Dean’s parents, things grow heated when Dean’s mother expresses her disapproval of Dean and Ben’s choice of career. Travis’ mother apologizes to him for being weak and not advocating for him more when he was younger. Carina expresses her desire for children, and Maya believes that she should be the one to bear their kid.

When Jack’s grief gets the best of him, he tears through the walls until she breaks down in tears. Vic consoles him, and the two of them make up briefly before Jack leaves. Miranda is called by the Millers since Pru screamed out for her when she awoke. In the final minutes of the program, Jack and Vic kissed at random. Andy gives a speech to get everyone on the same page. Andy is told by Sullivan that she will have a hose to herself. She admits to sleeping with Beckett.

Who gets custody of Dean’s daughter, Pru in Station 19 Season 5 Episode 7?

Dean Miller’s parents, Ifeya Miller (Barbara Eve Harris) and Bill Miller (Jeffrey D. Sams), force Jack Gibson (Grey Damon) out of Dean’s home in Station 19 Season 5 Episode 7, “A House is Not a Home.” Although legal paperwork shows that Dean picked Ben and Miranda to be Pru’s guardians, the lawyer emphasizes that the grandparents retain their rights. Ben claims that Dean’s parents were unconcerned about Dean’s desires. He immediately persuades Miranda to join him in fighting for Pru, as this is what Dean desired. Ifeya and Bill Miller are approached by Ben and Miranda. Ifeya, on the other hand, is adamant that Dean made the wrong decision. Ifeya is critical of Ben and Dean’s profession as firefighters. As a result, Ben insists that he and Miranda would respect Dean’s life choices and teach them to Pru. Dean’s parents are unyielding. Instead, Ifeya says that Miranda is allowing Pru into her home only to witness the death of another father — Ben, who is also a fireman. Pru, on the other hand, awoke crying and asking for Miranda. They shared a wonderful moment, which featured their son Joey.