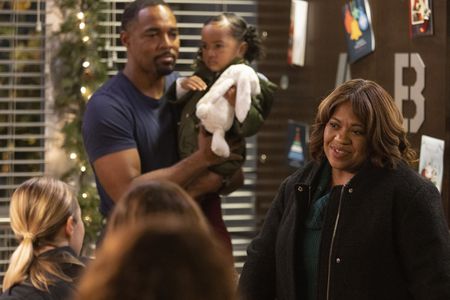 It’s Christmas time in tonight’s Station 19 episode. The team was in various stages of life, and the season didn’t provide them the typical joy. Jack was constantly inebriated. He wasn’t drinking at work, which was a good thing. He was only drinking in his spare time. Ben and his wife were fighting the Millers in court. They were formally fighting their son’s will, and they had the financial resources to do so for years.

Montgomery has a partner who gave him a painting of himself in bed as a present. He despised the artwork. He thought it was excessive, but he didn’t tell his lover since he didn’t want to offend Emmett. Vic, on the other hand, was a different story. Vic was cleared to return to work, and on her first day back, she ran into her boyfriend. Vic and Theo have found themselves in an unusual situation. They haven’t broken up yet. They simply aren’t talking about anything essential, and Vic has used the excuse of a deceased buddy to put some distance between them. Theo, on the other hand, was filling in at Station 19. He never brought it up, and she didn’t even inform him that she was returning to work. Vic informed her circle of pals.

She informed her superior. She simply forgot to tell her partner of more than a year about it, and they never discussed it again. Vic was still on the phone with Jack while she dealt with a Crisis One situation. They drove to a residence to help a woman who was allegedly having a panic attack, but Vic spoke with her and discovered it wasn’t a panic attack at all.

Amy is the woman’s name. Amy’s husband is abusive, and he has persuaded everyone that she is ill. Her panic attacks, he claims, drive her to strikeout. The truth is that he beats her up, and his most recent attack on her was terrifying. It’s scary, like call the cops scary. Vic attempted to assist Amy by removing the woman’s toddler boy from his father. However, the individual then dialed 911. He threatened to file a kidnapping report on Vic, so Amy had to speak up. She had to file a complaint against her husband for what he did/does. Vic’s career would be on the line if she didn’t, and she couldn’t risk anything with a new Fire Chief in charge. The city of Seattle has appointed its first female Fire Chief, who will visit all of the stations to assess them. Andy (Jaina Lee Ortiz) has a sudden revelation about her reluctance to sign the divorce papers while managing toy donations with Carina (Stefania Spampinato).

Vic attempted to get Amy to come forward. Amy refuses, and Jack is successful in reuniting the infant with its parents. The rest of the squad was aiding a man trapped between two cars across town. The man returned to pick up groceries that he had sent to his home instead of the rental. The automobile he had parked broke away, trapping him between it and the other vehicle. The PRT was required by the team. It was an on-the-go OR. It was the only way to get the unfortunate guy to the hospital alive. Captain Beckett called in for the PRT since the new Fire Chief was not responding. He’d been given the runaround. Ben had had enough of waiting and said that he would use the PRT regardless of whether they received authorization or not. That’s when he dialed Andy’s number.

Andy was assisting with the toy drive at their station. Ben urged her to accompany the PRT and Carina, who was also a doctor, to the site. Meanwhile, the victim dialed his wife’s number. When he informed her about the accident, she immediately drove over to be with him in case the worst happened. Meanwhile, Jack came to Vic’s rescue. He informed the responding cops about Amy’s claim, and they conducted a search of Amy. Her body was covered in bruises. Vic approached Amy about bringing charges after her husband was arrested. Vic warned Amy that as long as her son’s father is present, he is in danger. If her husband was released from prison and returned home to her, he would be even furious. As a result, she must depart.

Vic persuaded Amy to leave. Amy is related to a cousin. She had already packed a bag and was on her way. Ben’s circumstances changed when they received the PRT and were able to remove Terrence. He immediately began flatling. While they were opening him up, they had to drive him to the hospital, and his family rushed to Grey Sloane to be with him. Andy and Sullivan had been watching Terrence with his wife. That was never the case in their marriage. They didn’t have what Terrence and his wife have, even when they were at their finest. They were two messed-up people who had been raised by messed-up people and had no idea what made a decent marriage or how to pick the proper spouse. They are aware of this. After that, they came to terms with their divorce.

Vic was also demoted at work by Jack. He told her she couldn’t tarnish Miller’s legacy, so he put her on the bench, and she understood she needed to work on herself. She told Theo about the kiss she had with Jack. She expressed regret. She confessed her love for him. She also mentioned it was fine if he wanted to leave her, which he does not. He adores her as well. Vic agreed to perform the necessary work on herself when Theo stated that he was in it for the long haul. Later, Carina informed the team that she and Maya were attempting to conceive a child, and everyone expressed their happiness for the pair. They were also able to spend the holidays with Pru, who was allowed to visit them.