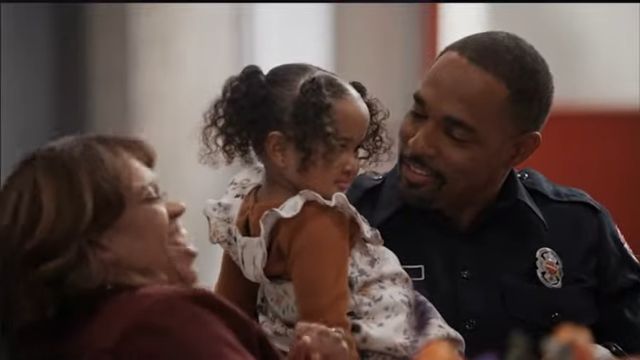 In the previous episode of Station 19, both Stations 19 & 23 attempts to celebrate Thanksgiving in Season 5 Episode 6. The concern on everyone’s mind is who will raise Pruitt (Janai Kaylani), Dean Miller’s (Okieriete “Oak” Onaodowan) daughter. Ben Warren (Jason George) assured Miller that if anything happened to him, he would take Pru. Miranda Bailey (Chandra Wilson) from Grey’s Anatomy, Ben’s wife, is aware that her grandparents will most likely desire custody of the young daughter. After tonight’s pivotal Thanksgiving episode, it’s understandable that fans would want to know what will happen in Station 19 season 5 episode 7. and When is it going to happen? The bad news is that you’ll have to wait a long for the next episode 7 to officially begin. The winter finale is set to air on December 16 that episode has already been confirmed to be holiday-themed.    So, here’s Everything we know about Station 19 season 5 new episode 7 so far, including the release date and promo which can be found at www.tvacute.com.

A significant portion of show might, and in many ways revolve around the aftermath of Dean Miller’s death. We’re talking about a pivotal character in this plot, and it’s difficult to see Station 19 being anything like the same show without him. it seems that Dean the character will be addressed for the rest of the season, but individuals will begin to heal more as time goes on. Without a doubt, it will be the most difficult for Vic. She’s previously been through the heartbreak of losing someone she cared about; now she must recreate that experience. Pruitt’s grandfather afterward takes her home in Station 19 Season 5 Episode 6. Ben encourages Miranda to fight for Pruitt for the next episode, according to the trailer. “A House Is Not a Home” is the title of the seventh episode in the current Season.

Station 19 Episode 507 Synopsis: Vic and Jack lean on one another as they process the loss of Dean while Ben and Bailey try to convince Dean’s parents to allow them to raise Pru. Meanwhile, at Station 23, Andy’s role temporarily expands, and Sullivan subs in. Carina and Maya explore growing their family.

‘Station 19′ Season 5 Episode 7 will release on December 9, 2021, at (8:00-9:00 p.m. EDT) on ABC. The episodes are 42-43 minutes long each.  Subscribers to Hulu can watch the show online or live to stream it on Hulu+Live TV. the show is available on Fubo TV, DirecTV, YouTube TV, and Xfinity, among other platforms. You can also buy or rent episodes on Vudu, iTunes, Amazon Prime Video, Google Play, and Microsoft Store.

Vic Hughes (Barrett Doss) is shown recovering after electrocution and a heart attack. She’s also grieving Dean’s death. But she joins the firefighters for Thanksgiving. Jack Gibson (Grey Damon) is also struggling and offers to make Thanksgiving dinner to help him relax. On another call, Ben brings Dean’s daughter Pruitt to the station. “Where’s Daddy?” she asks incessantly. Then Ben leaves Pruitt with Maya Bishop (Danielle Savre). Then Travis confronts his father Paul Montgomery (Robert Curtis Brown) about lying to his mother. A gratefulness sharing exercise is suggested by Emmett Dixon (Lachlan Buchanan). But it makes Paul scream “gay and in love with a man” in front of his wife. She is outraged that Travis forced Paul to be honest. She maintains her marriage is good despite her suspicions.

They return to Ingrid’s (Lindsey Gort) new shop, Ben and Robert (Boris Kodjoe). Ingrid searched for Ben at the fire station in Station 19 Season 5 Episodes 5 and 4. Ingrid’s spouse died of carbon monoxide poisoning only a year before her shop burned down. Fearing another business fire, Ingrid keeps phoning. Her boss invites her to Thanksgiving dinner. When Ingrid arrives at Station 19, she notices Miranda and Ben is married. Surprised and wanting to leave, she refuses to stay. As they walk along, Ingrid says she mistook him for a date. Squatting, she leans against the railing. Ben attempts to persuade her. He calms her down and gets her to Grey Sloan Memorial Hospital for PTSD. Andy Herrera (Jaina Lee Ortiz) made Duval (Natasha Ward) get so much food. The food is for Captain Pat Aquino’s (Alain Uy) family because he was harmed in the past episode’s explosion.

Leslie fears Pruitt’s mother, JJ, may return to try to kidnap the child. Andy is enraged when Theo mentions Miller and Vic. Thankfully, she recognizes she’s making Dean’s death about her. Diane Lewis (Tracie Thoms) visits Vic. She says Crisis One won’t die. Vic admits that Dean’s death hurts more than her fiance’s. Vic is torturing herself for not loving Dean back, says Diane. Carina encourages Gibson to let go of his grief and re-enter the light. However, Travis’ mother notices smoke coming from the oven. No way to get the extinguisher inside the oven because it’s set to clean rather than bake. The kitchen fire alarms and sprinklers go off, devastating the Thanksgiving meal. Luckily, Andy arrives with supper Station 23 ready. Dean’s father arrives at the fire station and takes her home. Miranda invites him to stay for Thanksgiving dinner with Pruitt. Her grandfather afterward takes her home. Station 19 Season 5 Episode 6 finishes with her leaving.