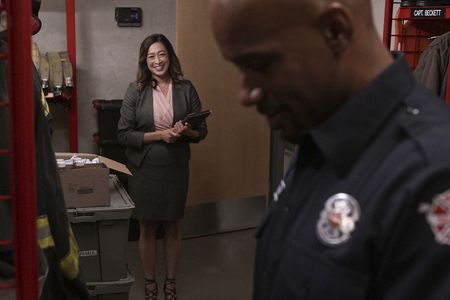 The second episode of Season 5 of ABC’s Station 19, is jam-packed with action. In a basement drug lab, Maya Bishop (Danielle Savre), Ben Warren (Jason George), and Robert Sullivan (Boris Kodjoe) are battling for air. In addition, despite his apology in the Station 19 Season 5 Episode 1 opener, Andy Herrera (Jaina Lee Ortiz) doesn’t hesitate to present Sullivan with divorce papers. Read full recap below. What will happen next has piqued the interest of fans. So, here’s what you can expect from “Station 19” season 5 episode 3 “Too Darn Hot”! www.tvacute.com has everything we know about Station 19 season 5 new episode so far, including the release date, promo, and photographs.

Station 19 Episode 503 Synopsis: When a heatwave hits Seattle, Station 19 becomes a cooling center and chaos ensues with locals who aren’t used to the extreme temperatures. Andy deals with regret and finds a friend in Theo. Joey comes face-to-face with his past during a ride-along with Ben and Jack.

Andy Herrera (Jaina Lee Ortiz) does something in the new Station 19 Season 5 Episode 3 promo video that makes people dislike her. In the most recent episode, she served divorce papers to her husband, Robert Sullivan (Boris Kodjoe). Sullivan was already loathed by many people, but Herrera surpassed him with her acts in the forthcoming Station 19 episode. On the hand, Fans are once again concerned about the couple’s future after seeing a twitter clip. Carina and Maya’s relationship has been on and off since they met in season 3.Carina confessed near the end of season 4 that she never planned to marry, causing fans to be concerned about their future. but In the Season 4 finale, the couple married.
Fans are once again concerned about the couple’s future after seeing a recent twitter clip. Maya is heard telling Carina that she doesn’t think she’ll ever be able to have children since it’s “terrifying.” Carina now appears to want children. Fans are becoming concerned as a result of this, as well as Maya and Carina’s facial expressions. Peep it here.

The power this conversation holds over our hearts. #Station19 pic.twitter.com/q3ImqDHxIm

‘Station 19′ Season 5 Episode 3 will release on October 14, 2021, at (8:00-9:00 p.m. EDT) on ABC. The episodes are 42-43 minutes long each.  Subscribers to Hulu can watch the show online or live to stream it on Hulu+Live TV. the show is available on Fubo TV, DirecTV, YouTube TV, and Xfinity, among other platforms. You can also buy or rent episodes on Vudu, iTunes, Amazon Prime Video, Google Play, and Microsoft Store.

To begin, Herrera gives Sullivan divorce papers at work in Station 19 Season 5 Episode 2. She didn’t answer the phone when he calls. Similarly, Dean has listen to Vic, his lady love, tell about her sexual encounters with Theo. Dean, Emmett, and Vic receive a mental health call a few moments later about two ladies, Alicia and Miss Debbie, who have locked themselves in a room and are preparing to flee through the window using sheets. In response to numerous 911 calls from Alicia and Miss Debbie, the landlord contacted a local mental health facility.

After both of them are rescued, the paramedics have no choice but to sedate Alicia since she believes someone is coming to hurt her. In the meantime, Travis, Robert, and Jack are trapped in the basement of a burning house. After the three of them pass out, Maya and Ben manage to offer some ventilation. Andy and Theo attempt to help the men but collapse, only to be rescued by an oxygen-assisted Sullivan. Andy and the new Captain discuss possible business ventures at work. Carina DeLuca, on the other hand, recognises that she is ready to start a family, while Maya’s top concern is her work. We discover more about her thoughts on motherhood as the episode progresses.