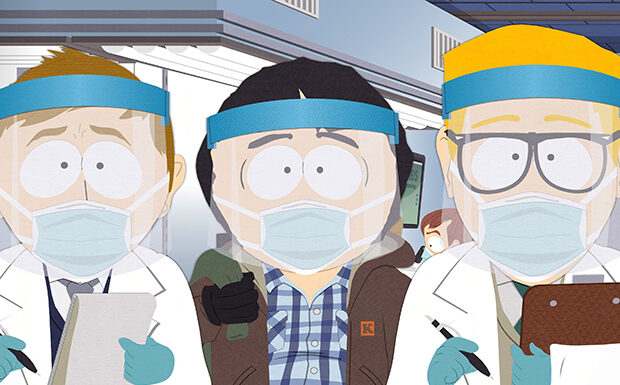 Trey Parker and Matt Stone, the creators of “South Park,” executive produced the holiday special. In 1997, the Emmy-winning series premiered. “South Park” will celebrate its 25th anniversary next year. Because of MTV Entertainment Studios’ long-term arrangement with Parker and Stone, viewers may expect fresh episodes until at least 2027. Another special will air on Paramount+ in December, though no official date has been confirmed. tvacute.com has a recap for “South Park: Post Covid,” you can read below.

What became of the children who survived the Pandemic? In “South Park: Post Covid,” Kyle, Stan, Kenny, and Cartman navigate life after the pandemic, but they’ll never be the same after COVID. Post-Covid, which is currently available to stream on Paramount Plus, frequently reminds the audience that the picture is set in the future.

Stan Marsh has relocated from South Park to the city in 2061, forty years after the events of the South ParQ Vaccination Special. He has an Amazon Alexa that transforms into a stereotypical nagging wife. Kyle Broflovski, now the guidance counselor at South Park Elementary, calls Stan to say their friend Kenny McCormick has died.

Stan, among others, returns to South Park to pay homage to Kenny, now a wealthy physicist. Kenny said that his closest pals would know where to uncover his missing data on COVID’s origins if they just thought like children again. To Kyle’s chagrin, Eric Cartman has become a rabbi with a lovely wife and three children. Stan doesn’t want to stay in South Park for long and refuses to help Kyle find Kenny’s missing data. Tweek Tweak and Craig Tucker, still together; Wendy Testaburger, now married to an outsider; Jimmy Valmer, now a late-night talk show host spouting bland jokes to avoid offending anyone; Token Black, now a cop; and Clyde Donovan all attend the wake. Kenny’s notes contain the name “Tegridy Weed,” so Stan leaves the wake early to watch the report.

To force Stan to visit his father Randy Marsh, Kyle sets up an upbeat message at the funeral, where Scott Malkinson is now a priest. However, a scientist intervenes and verifies Kenny’s death was caused by a novel COVID mutation. The town panics again, buying up all the toilet paper and putting their kids back in front of Zoom classes. The military arrives to quarantine the community since there is one unvaccinated individual present. Trapped in South Park and forced to reside in the emergency shelter at South Park Elementary, Stan must visit his father. Cartman upsets Kyle by repeatedly citing holy Jewish figures in exclamation while having intercourse with his wife, further convincing Kyle that Cartman is trying to get a rise out of him.

When Stan visits his father at Shady Acres, he learns that Sharon desired a divorce from Randy but controlled half the land, causing a major argument. Stan, weary of the property, set it on fire, unaware that Randy had imprisoned Shelly Marsh in the barn. Sharon murdered herself in grief at her daughter’s death, and Randy and Stan blamed each other and split up. They escape to Tegridy Farms, where Randy admits to starting COVID forty years ago by sexing with pangolin in China. However, in his outburst, Randy recounts sneaking marijuana seeds into his rectum at the nursing facility. Kenny hid his data up Stan’s rectum.

The rest of the gang tries to find Kenny’s info. However, Clyde is the only South Park character who is not vaccinated (and is thus the reason for their imprisonment). They try to contact Kenny’s lone surviving colleague, Dr. Victor Chouse, but Clyde is not vaccinated, so they can’t visit him at the mental hospital. The party finds Kenny’s bloody secret lab in the elementary school. They realize that Kenny wasn’t just looking for COVID’s genesis, but also perfecting time travel to stop it from happening. The others try to dupe Clyde into thinking the vaccination is cocaine, but he recognizes it as such and refuses it.

Stan, Kyle, and Cartman get past the security at the hospital to fetch Kenny’s body. Token, Craig, Tweek, Wendy, Jimmy, Clyde, and Token extract his flash drive from his ass and carry it to the school lab. Everyone sees Kenny’s final video, in which he tries to travel in time. Stan, Kyle, and Cartman allow the epidemic to push their friendship apart and become “argumentative, belligerent, pessimistic bastards,” according to his colleague. Kenny spent the rest of his life trying to save their friendship. A malfunction killed all the scientists and Kenny was teleported away since he didn’t wear his “chin diaper”. Infected with the new COVID version, he reappears (though presumably caught it in the past and brought COVID back to the future).

Knowing Kenny blamed them for their awful future makes Stan, Kyle, and Cartman reminisce about their wonderful youth and how they allowed the epidemic to destroy their friendship. Kenny’s work and perfecting time travel will fix the future and their friendship. With his family, Cartman admits he does not want his future fixed and flees with them. Randy finds a lone marijuana plant sprouting in the scorched fields of Tegridy Farms and resolves to defend the last of Tegridy.

The episode ends with, Returning to South Park Mental Asylum Plus, where Kenny’s right-hand man “Victor Chaws” is being held. we see the name tag on his door that it isn’t Victor “Chaws.” It’s Victor Chaos. A mispronunciation of Victor Chaos.