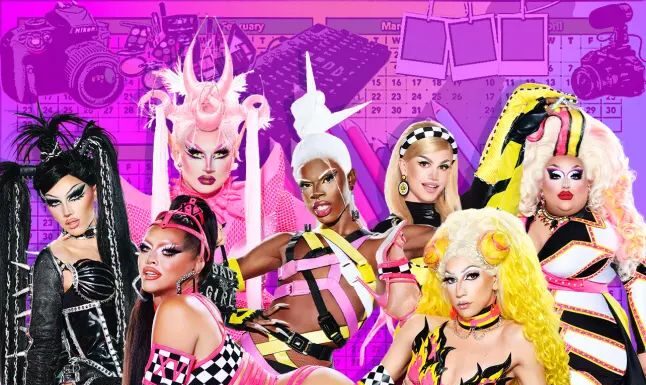 As the Emmy-winning competition RuPaul’s Drag Race returns for a 15th season on its most recent platform, MTV, prepare the runway for a new diva-Licious exhibition of jaw-dropping drag fabulousness (part of a global expansion on MTV channels in Brazil, Germany and Mexico). For the two-part premiere, Ariana Grande serves as a special guest judge with host RuPaul, regular judges Michelle Visage and Ross Mathews, as well as the first set of identical twin contenders, Los Angeles’ Sugar and Spice. My favorite nickname is Marcia Marcia Marcia from New York City. A talent competition will be held to decide who stays and who leaves.  Now, let tvacute.com fill you in on all you need to know about that topic!

Marcia and Luxx, two-year-old queens, surprise the queens. Sasha Colby’s bodysuit and big hair stun the Werk Room. The queens are delighted to see Sasha Colby, a famed drag queen whose drag daughter, Kerri Colby, was Miss Continental. The queens are speechless as RuPaul’s Drag Race Season 6′s Ornacia enters. The queen unzips to reveal Ariana Grande. She scares all the queens. RuPaul and Ariana Grande meet. RuPaul announces the ultimate prize is now $200,000. Ariana is the first-season guest judge. Drag Race’s inaugural Mini Challenge inspired the first. The queens will have to pose on a car hood with the pit crew while being hosed down. Funny Irene Dubois. Luxx splits for her photo since she hates getting her long hair wet. Marcia drenches in her sweater while Aura gets really sexual. Anetra loses an eyelash, Malaysia is soaking in her furry outfit, Princess Poppy raises her leg for her shot, and Sasha Colby tosses her hair in the water. Aura Mayari feels she’s the season’s trade. Muscular Aura.

Ornacia returns to the Werk Room and unzips the real Vivacious. RuPaul’s introduction gags the queens. RuPaul explains their Mini Challenge is identical to the last group. However, RuPaul’s Drag Race Season 2’s first shot will inspire the session. Queens will pose on a motorcycle with the Pit Crew in the wind. RuPaul laughs at Salina’s antics. Leaves clog Amethyst’s mouth. Jax thinks she did the photoshoot. Mistress fears losing her lashes. Robin obtains feathers on her glossy lips and Loosey postures humorously. Mistress says she didn’t like the twins while the queens untuck. She helped Sugar glue wigs. Sugar awkwardly attempts comedy on the bike. Spice removes her wig and wears a shower cap for hairography. She poses oddly. Mistress apologises for Sugar and Spice in the Werk Room. She wants to see the twins’ performance and contributions. They chatter while undressed. RuPaul announces Loosey LaDuca won the Mini Challenge. The second round of Maxi Challenge queens will compete in a talent show. The queens must also choreograph their entrance number. Queens are practising in the choreography studio. RuPaul enters and welcomes the other eight candidates. RuPaul announces an actual first-week elimination.

Irene Dubois and Amethyst: The lip sync: It appears that Loosey’s emotional outburst and a great joke about not using pads kept her out of the bottom two. As Ariana put it, “it has to land” for comedy to be dangerous, which Irene and Amethyst discovered. Irene couldn’t think of a punchline, and Amethyst simply forgot it. Only behind Britney Spears and RuPaul herself, Ariana Grande’s “7 Rings” is the ninth song to be played throughout their performance. A musician judging the show while their song is played is still a rare opportunity. When witnessing the concert, Grande could hardly contain her excitement and even sang along. Irene and Amethyst performed brilliantly in their lip-sync duet.

Irene’s dedication was the only flaw in her performance. Amethyst provided a humorous take, but Irene kept things serious. Even though she had a chance to win, she later changed the tone and included comic aspects, which undermined what had come before. Amethyst was also able to add a jump split. Sometimes a lip sync is so close that the spread of the legs can make the difference. Irene seems like a deliciously sinister queen who could spark drama, so it’s a sorry to see her go. In hindsight, her elimination seems predetermined because she was prominently featured in the edit and triumphed in a mini-challenge. She made a graceful exit, so maybe people will remember and respect her as the first queen to be ousted.