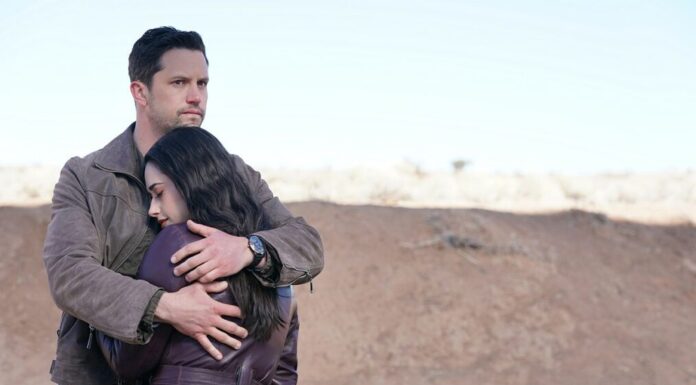 New Mexico’s Roswell Season 4 Episode 12 challenges people to make difficult choices, which they must be prepared to accept as having potential long-term effects. It centers on the aliens’ attempts to leave the pocket universe. Liz faces a setback due to the mist, while Max goes to Tezca to face his fear in addition to trying to save themselves. Alex is prepared to have Dallas marry him and Michael as a storm forms in the pocket universe and he faces certain death. Michael, despite beginning with vows, is unable to complete the task. Once he is fit again, he wishes to be able to marry Alex on their planet, in the presence of their friends.  (read the recap below) Viewers have been anxiously awaiting Episode 13 ever after Episode 12’s exciting conclusion. Without further ado, let’s dive right in to learn more about Roswell, New Mexico Season 4’s upcoming episode before it airs on The CW. (www.tvacute.com) We’ve got everything you need to know about Roswell New Mexico Season 4 Episode 13.

“How’s It Going To Be” is the title of the upcoming episode, which was written by Chris Hollier and Joel Anderson Thompson. Lance Anderson served as the director. So, what to expect in the series finale – The gang managed to escape the liminal space before it disintegrated, but they still have to take out Clyde, who is effectively holding them captive in the desert. Liz requests more help, possibly in preparation for the crucial confrontation with Clyde. However, who she calls is a mystery.

Shiri Appleby’s Allie Meyers will appear in the series finale ???

If an actor from the first Roswell television series appears in the series finale, it might be Shiri Appleby’s Allie Meyers, which would be a thrilling prospect. In the penultimate episode, Michael also makes a pledge to Alex that, despite the chaos of this season, their love for one another never faltered. They are more in love than ever. Along with this, one of the aliens must heal Alex as quickly as possible because his condition is still becoming worse. For more information, see the entire Roswell, New Mexico season 4 episode 12 summary and the promo below:

Roswell New Mexico Season 4.13 Synopsis: –  Liz doubts her abilities, and calls for reinforcements, meanwhile Isobel shows Max a memory, one that will put him on a new trajectory and Michael makes a promise to Alex.

Liz Ortecho is played by Jeanine Mason. Max Evans is played by Nathan Dean Parsons. Michael Vlamis in the role of Michael Guerin Isobel Evans is played by Lily Cowles. Alex Manes is played by Tyler Blackburn. Carina Adly Mackenzie is the show’s creator, and it features a number of directors, including Julie Plec, Tim Andrew, Jeffrey Hunt, and Paul Wesley, among others.

Roswell, New Mexico Season 4 Episode 12 (Series Finale) will premiere on September 5, 2022, at 8/7c On The CW. It will also be released on the official site of CW Network. Another option is Available; DirecTV, Fubo TV, and YouTube TV. VOD platforms like Apple TV, iTunes, and Prime Video.

Shivani is working in a new lab, Michael and Alex are arranging their nuptials in the pocket dimension, and Liz is working at the lab. Max eventually receives his powers back from Liz through a mist she creates using an accelerant. In the world Dallas officiates, Michael and Alex get married, but Michael annuls the ceremony because he pledges not to let Alex perish and to figure out how to create fuel for the console. Rosa locks it away out of anxiety that Liz might be in the lab working with the alien mist. Max is accompanied by Isobel to Tezca so that she can teach him how to control the blue flame. After being pursued by Shivani and her men, Maria carries the console to Deep Sky. Sonya suggests using prolonged meditation to communicate with Alex. Michael discovers tree roots that will assist him in producing fuel.

Liz admits she sometimes forgets things. Max and Isobel ultimately decide to go into the dimension. Bonnie is taken by Clyde after he appears in the pocket dimension. To get rid of the brand, he injects himself with her blood, but Max and Isobel show up and catch him. Liz fights with her recollection and strives to reach the mist. Michael is able to make fuel. In addition, Maria, unable to reach Alex, contacts Dallas and obtains the directions for making the fuel, which she then gives to Liz. Clyde alerts the gang to the fact that Theo planned the storm to start when Jones’ DNA was activated in the dimension as the storm approaches. The group arrives at the portal, but Maria and Sonya are halted on Earth by Shivani, who thinks they are in possession of the console even though they are not. When Michael performs the same on his side of the portal while Liz, Kyle, and Rosa do the same on the Earth side, the portal opens.

With his mark gone, Clyde blocks the entrance and says that Shivani’s serum gave him all of the abilities Bonnie has ever stolen from anyone. He closes the console after removing the gasoline from it and exiting via the portal. When Tezca enters the realm, she instructs Max to use the blue flame to repel the storm. Once the fuel is removed from the ground, Dallas is able to restart the console, restoring power to it and enabling everyone to pass through the portal. The team successfully escapes the pocket universe, but Tezca, who had come to assist Max and Isobel, is unable to because of her tattoo of Jones. She has given her life in order to protect the kids of the people she previously fought. In preparation for Max and Isobel’s return to Earth, Clyde puts everyone on their knees.