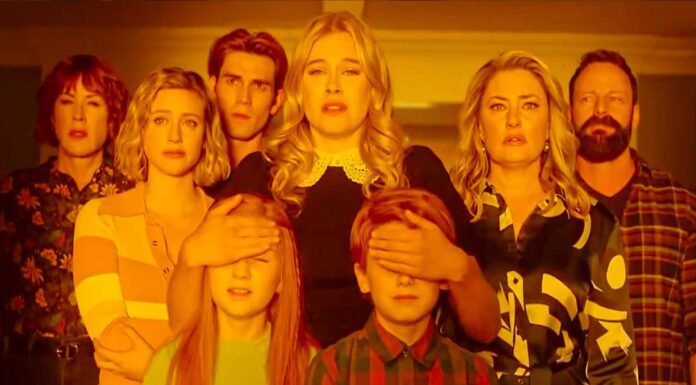 The finale episode of Riverdale season 6 included farewells, reunions, and significant character development. It served as a touching and gratifying season finale. It took a while for Archie to ask Betty to marry him.   Riverdale sort of said farewell to the past and turned toward the future. To refresh your memory, Percival dispatched a comet that is coming directly for Riverdale and added a force barrier that keeps people from escaping the city. In order to smash the comet, our heroes banded together, pooled their talents, and sent a superpowered Cheryl (Madelaine Petsch) into space. Nobody was certain if their strategy would succeed, but in the end, it kind of did. Although Riverdale has survived the comet, it no longer precisely resembles the Riverdale we once knew. Our primary characters are transported return to high school in 1955 after the comet reset practically everything. let’s examine the Riverdale season 6 finale’s events.

Bailey’s Comet will destroy Riverdale in a very short time. Why don’t they just run?” Since they can’t! Percival was clever and as part of his final spell, he erected an ethereal wall around the settlement. The door is opened for entry but is closed to exit.

Jughead cannot create portals, therefore no. And Tabitha claims that the comet always strikes regardless of the time she travels to. Archie and Anthony will be the only survivors in the event of that comet’s impact due to their immortal qualities. Cheryl and Heather ask Abigail for assistance as a result. She informs Cheryl that she can melt the comet using all of her Phoenix power. The comet can be melted, Cheryl assures the others, but it might require all of her abilities, in which case all the individuals she brought back to life might perish once more. In other words, Archie, Jughead, Fangs, Polly, Nana Rose, Alice, Frank, Sheriff Keller, and Dagwood.

Abigail wants one last night with Thomasina in return for her assistance. In other words, Cheryl and Toni must engage in sexual activity while submitting their bodies to the spirits of their ancestors. Heather will keep our souls in a jar until the lovemaking is through. Cheryl also asks Toni for a favor so that they can spend one more night together “in the carnal form” by allowing Abigail and Thomasina to occupy their bodies. She reluctantly agrees, and Abigail and Thomasina take control of Cheryl and Toni’s bodies and utilize them to have a good time in bed.

Archie’s mother came to Riverdale at a bad moment, but Archie doesn’t really have time to concentrate on saving her mom because he’s too busy planning his marriage proposal to Betty. Archie also discloses to Veronica that he wants to propose to Betty. After asking Veronica for a ring, he rushes into Betty’s bedroom and pops the question while on one knee.  She recalls how he proposed to her when they were young, and she advised him to do it again when they turned 18. they have a wonderful and healthy chat, and she urges him to ask her again when Cheryl melts that comet. Then, Archie makes the oddest declaration of love he’s ever made: “I’m going to break through that barrier so I can marry you, Betty Cooper.”

Additionally, as Abigail and Thomasina leave their bodies, Cheryl and Toni awaken in bed together and have no memory of what has just occurred. Abigail hands Cheryl a rope that is braided in a thousand knots; when it is untangled, Percival’s force barrier will be breached. Drake calls Betty on FaceTime while Cheryl and Toni deceive one another about forgetting their sexcapade. Evidently, their boss wants them to lead the FBI’s division devoted to tracking down serial killers, but Betty objects. Now that that phase of her life is ended, she is prepared to finally make the right decision. Betty thinks back to her discussion with Archie. After his mom dragged him away from the barrier which Archie believed he’d bust through with his biceps and he found himself in Betty’s bed, apologizing for proposing during all the chaos. Betty however stops him. She asks him if he’ll marry her this time because she’s been considering her future goals. And he replies YES.

The implications of Archie finally giving Betty the answer she wants!?!!? #Riverdale pic.twitter.com/gJQ4xCyJZB

In another scene, Veronica assures Reggie that if they make it out alive, he can control the casino outright. He then makes an attempt to reconcile, but Veronica Lodge is ready to move on and truly try dating.  Tabitha and Jughead had about eight hours to live and chose to spend four of them watching Titanic. Jughead, who is aware that he would most certainly pass away later, asks Tabitha to pledge that she will use Alexandra Cabot’s assistance to take Pop’s national. She utilizes her skills to show Jug their future in one minute. They have kids, They age, they have children, and they all do it at a Pop’s booth.

THIS ENTIRE JABITHA SCENE IS SO ENDGAME CODED! #RIVERDALE pic.twitter.com/Qmej4OGnme