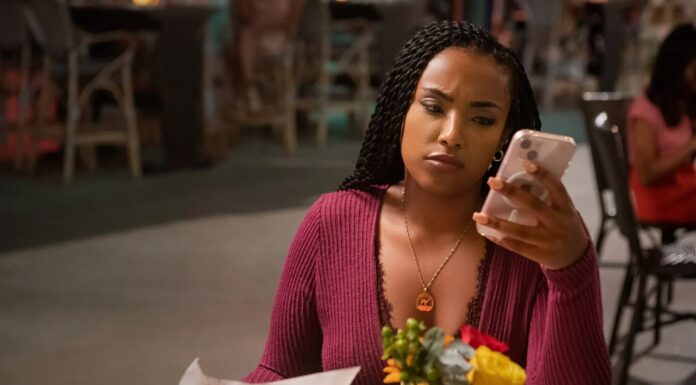 In Rap Shit! Season 1 Episode 6, After seeing the nasty comments on her argument at the Spotify party on social media, Mia decides to take the day off from work. Shawna declines Cliff’s advances and skips work to join Maurice and her other pals at the beach. After she uploads videos of the outing to Instagram, Cliff texts her angrily. Shawna and Maurice secretly had sex in the hotel’s opulent penthouse. Mia is depressed and finds it unexpected when Lamont offers her comfort. After the Spotify argument, Shawna calls Mia to apologize for not standing by her sooner. She also threatens an Instagram Live reaction video blogger who criticized Mia. Chastity assures Mia that she can land the rap group a prestigious engagement. (www.tvacute.com) Here’s the recap of Rap Shit! Episode 6.

Since the ice age, reaction videos are obnoxious. They exploit others’ emotions and vulnerabilities. Ronnie, another attention-seeking “reactor,” humiliates and berates Mia. Shawna is also an accomplice, but she gets caught. Social media is cruel. When it’s their turn, trolls don’t back down. Mia is hated for slapping the party girl. Shawna doesn’t mind Jill and Bebe’s suggestions concerning the situation. Crystal from Spotify isn’t concerned. It’s everyday in rap culture.

Cliff has been attempting to get back together with Shawna after their breakup. The rapper shoots him down and says they’re done. Mia calls Shawna about Ronnie, but she doesn’t answer. She invites Maurice to the beach, where she’ll meet friends. Mia needs comfort. She finds angry people under every rock she turns. Her mother is similar. Mia meant to leave Melissa with her for the day to clear her brain, but she pulls her back when she starts screaming. Mia and Shawna don’t consider Chastity their manager, Deja tells Chastity. Chastity won’t quit. Shawna spends time with friends and uploads Instagram stories to move on from Cliff at the beach. She craves spontaneity and rents a jet ski. Maurice joins her, but she loses her phone when she falls.  Chastity makes a deal to allow the couple play at the club, but he won’t pay her. Lamont visits Mia, but his daughter Melissa answers the door. Lamont handles Mia’s fury well when no one defends her. He acts like a true father and partner by cooking and cleaning at Mia’s residence.

Melissa finally feels at home. Shawna and Maurice hook up with the master key to a lovely neighborhood room. Maurice gets her a phone to “stay in touch.” Shawna notices Ronnie’s live feed and requests to join. She joins and teaches him not to leech off anyone who talks back. She defends Mia and brands Ronnie an attention-seeking parasite. Shawna’s support inspires Mia. She requests Lamont’s rhythms and writes a song. Shawna tells Mia she slept with Maurice. Mia’s OF customer explains why she was evicted. Mia didn’t refuse because he brought a friend to a session. Mia was kicked out for not coping. Mia shows Shawna her bomb song. Shawna loves it, so they invent lyrics. Shawna verifies that Chastity can be their manager if the booking is legitimate over dinner with Chastity, Mia, and Shawna. Shawna accepts the booking’s styling, red carpet, and costumes. She asks Maurice to plan another credit card fraud to keep her promise. Cliff tells her she was right about Fatima.