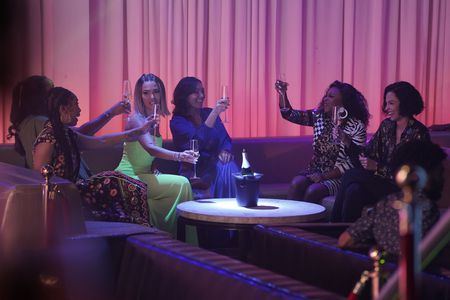 In episode five of Queens (2021) Lil Muffin was back. Jojo learns that Eric’s chain was stolen as part of a popular Tik Tok challenge, and the two plot to reclaim it. Valeria needs media attention to get her name out there. Fivio Foreign approaches Brianna at the AMA pre-party and invites her and her kids to join him on his private jet to Paris to get to know her. Jill is late to their American Music Awards practices, which is a major thing because they don’t want another performance like the last. The gang erupts when Jill plays their hit song with drag queens at the AMA pre-party.  The episode 5 recap may be found at the bottom of the page.  In order for You to psychologically prepare for the following episode. tvacute.com has the trailer and summary for Abc’s Queens episode 6 titled “Behind the Throne.”

A lot will happen tonight on Queens season 1 episode 6. Its title is “Behind the Throne.” We’ve grown to know these personalities well, and that allows us to see what makes them tick. The women may be able to record a new video, which is fantastic but something they haven’t done in a long time. Brianna is juggling her job and family life.

Queens (2021) Episode 6 Synopsis: As the ladies prepare to shoot their first music video in nearly two decades, Brianna has a hard time maintaining a work-life balance; Lil Muffin works to reestablish her career; Jill continues to manage her public image.

We’ve been following this since the premiere, largely to see if Queens will get more episodes. there are some encouraging indicators. Season 1 Episode 4 had a little improvement over the previous show, concluding with over 1.34 million viewers. The probability is that it will create positive momentum.

‘Queens’ Season 1 Episode 6 will release on ABC on November 23, 2021, at 10:00 p.m.pm ET Every Tuesday at the same time.  If anything else happens to the schedule, your prior session will keep you informed.

Naomi, Jojo, and Eric are playing a board game together. They look like a happy family. Jojo now knows Eric is her father and is eager to meet him. Naomi reluctantly agrees to Eric’s request to spend time with Jojo without her. Naomi fears losing JoJo to Eric. Lauren also known as Lil Muffin was in episode two. She’s out of rehab and ready to retake her place among the top female rappers. To keep her stage character apart from her personal life, Lauren rapidly learns that it isn’t simple. Lauren overhears two girls calling her dumb and unimportant while looking at a magazine featuring Lil Muffins. Lauren is unrecognizable without her bright wigs. Lauren chooses to make a statement by getting a pink diamond inserted into her brow, like Lil Uzi Vert.

Two young admirers approach Eric during a lunch break and ask for a picture. They take the photo and his gold chain. Jojo proposes they call the cops while Eric chases the boys. “It’s hip hop,” Eric teaches her. Hip-hop doesn’t call the cops.” Eric suspects his rival, Jada Kiss, of the theft. When he confronts him, Jadakiss tells him they are past their chain snatching years. Jojo learns that Eric’s chain was stolen as part of a popular Tik Tok challenge, and the two plot to reclaim it. Valeria needs media attention to get her name out there. A stranger in her front yard excites her since it will draw attention to her. The stalker reappears and knocks on her door with a floral bouquet. Valeria learns that her stalker is her biological mother, who abandoned her as a child. Brianna has been too busy aiding her late husband’s lover who is now carrying his child. The mistress decides to abort her pregnancy and asks Brianna to accompany her to the doctor. In the end, Brianna resolves to focus on herself after being stood up and discovering Alexis’s departure.

Fivio Foreign approaches Brianna at the AMA pre-party and invites her and her kids to join him on his private jet to Paris to get to know her. Brianna dismisses his advances, believing he’s too young. The girls exhort Brianna to experience life and break the rules. Brianna enters Fivio Foreign’s room and upsets him. Now that Jill is free, she is finally living her truth, but she is going too far. Jill is late to their American Music Awards practices, which is a major thing because they don’t want another performance like the last. The gang erupts when Jill plays their hit song with drag queens at the AMA pre-party. Alexis, Jill’s boyfriend turned manager, tells her to just watch out for herself. When Jill’s ex-husband surprises her at Brianna’s house and sets fire to their divorce papers, the ladies forgive him and support her.