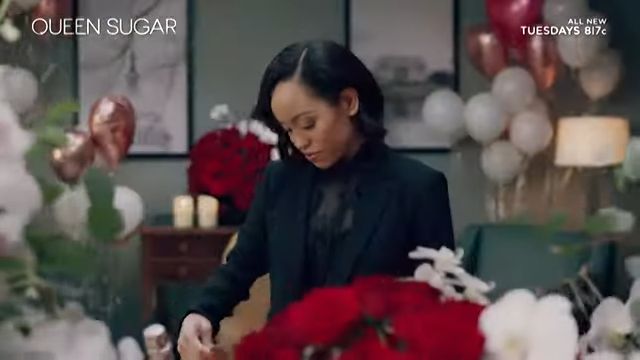 In the previous of Queen Sugar Season 6, Hollywood is determined to uncover Vi’s dark secrets. He discovers the reality behind Vi’s skulking. Davis attends his first Bordelon family dinner in years. Can Billie and Prosper heal their friendship without reliving the past? Charley was saddened that Davis wanted to live a quiet life. But the happy couple is unaware their son has panic attacks. but he saves. So now the major question. Why does Ralph Angel (Kofi Siriboe) still like Theo? , why would Ralph Angel risk everything by being with a criminal? what will happen next, after watching this episode? you can take a glimpse of Queen Sugar Season 6 Episode 4 titled “To A Different Day” synopsis and promo with www.tvacute.com below, which will enable you to understand the episode better. Watch the Sneak Peek below.

Queen Sugar Episode 604 Synopsis: Gayle King interviews Charley; Nova and Billie discuss the past and Hollywood bonds with Gabriel; Micah’s romantic relationship ends, and Ralph Angel discovers what’s wrong with his crop; something shocking is found on the Bordelon land.

Queen Sugar Season 6 Episode 4, will release On September 28, 2021. it’s time to watch it at 8/7 central. Filming for the show’s fictional St. Josephine Parish took place in and around New Orleans in 2021. You can view the released episode on OWN’s official website if you missed it. DirecTV, Fubo TV, Philo TV, YouTube TV, and Xfinity all have live streaming alternatives. VOD sites such as Amazon Prime Video, iTunes, Apple TV, Google Play, Vudu, and Spectrum on Demand also have the show available. In addition, if you have a Hulu account, you can watch the newly released episodes.

Ralph Angel’s financial problems have only become worse. A town council meeting is being held to discuss the USDA fund set up to compensate farmers who have been victimized by generational discrimination. They’ve been told that finding out who would be paid will take at least another six weeks. Prosper returns home, but relations between him and Billie remain tight. Spies from Hollywood Violet snatch money from the cash register and flees with it, as well as a large package of groceries and supplies. She introduces him to Selene and Gabriel, her son. When they were all locked in the house together during Covid, Selene put up with her husband’s cruelty until he started abusing Gabriel. Violet’s concealing secrets have enraged Hollywood. Micah is visibly melancholy or agitated, and he drinks during the day. He had a panic episode at school later. Micah was fortunate to have a friend present to assist him.

On Nova’s porch, an envelope is left. It has a picture of her with a target on it. She crumples it up and throws it aside, irritated. As Charley and Davis announce their reconciliation, Davis is invited to Violet’s for a family meal. Davis apologizes to the family for causing them pain and expresses gratitude for the second chance he was given. The Los Angeles Dynasty hires Davis as its head coach. He is concerned that their reconciliation may jeopardize Charley’s political ambitions, but Charley is unconcerned. The Real Spot in Hollywood just celebrated its grand launch. Ralph Angel invites Theo, a prison acquaintance. When Theo finds out that Ralph Angel is having financial troubles, he asks him to help steal a shipment of computers. Ralph Angel turns him down. Both Violet and Nova (Rutina Wesley) say that Billie can’t be trusted. Jimmy Dale cheated on her a lot, but Vi thought of Billie as family, and she’s never gotten over it. Darla (Bianca Lawson) and Ralph Angel discover that they will require the services of a midwife and a Doula and that their insurance will not cover the entire cost. Darla considers giving birth in the hospital.